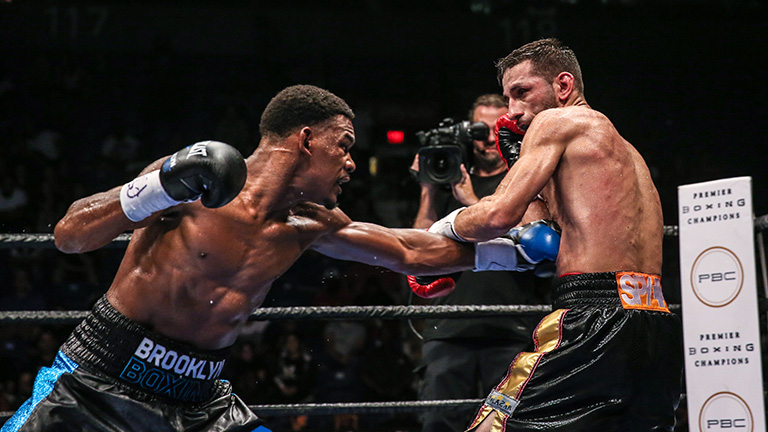 DANNY JACOBS, the holder of a WBA regular middleweight title, dropped Sergio Mora five times before halting him in seven rounds at the Santander Arena in Reading, Pa. on Friday (September 9), Danny’s second win over Mora.

Afterwards Jacobs volunteered to fight Gennady Golovkin. “That’s who we want,” he said. “I want to prove to the world that I’m the best middleweight.”

Reflecting on his own fight, Danny said, “I wanted to go in there to hurt him and keep my knockout streak alive. I did what I said I would.

“I didn’t expect to knock him down as much, but I did see the fight ending in a knockout. It took a while because he’s so tricky. I wasn’t able to jab the way I wanted to. That’s what happens when you fight guys who have been in the game for a long time.

“I have to take my hat off to Sergio Mora. There was a lot of talking before this fight, but this is boxing. I respect any man who gets inside of this ring.”

On the same show as Jacobs-Mora, Robert Easter took a split decision against Richard Commey to win the IBF lightweight world title. “I feel like I won this fight. I did everything that I could. I landed the more accurate shots. I come from very far and it’s hard to win here versus an American. I deserve a rematch,” Commey said. “I was very devastated when I heard the scores. I knew it was a close fight. He went down and I didn’t.

“I want to be a world champion. Even if he doesn’t want to fight me, I want another opportunity. I can fight at the highest level in the world. We worked so hard to get to this stage. I want to stay at this level. I’ll keep improving.”

Robert Easter said, “Richard Commey is a tough, tough competitor. He made me fight each and every round, but we did it.

“The game plan was to go out there and box him and use my length and reach. I made a few mistakes tonight. One of them was not fighting him early enough. It wouldn’t have been close. In the last round, when I needed the round, I went out and got it.

“I took everything that I had, all 16 years in the sport, and I used it to go get that belt.

“You always have to stay composed as a professional. I wasn’t hurt at all on the knockdown. I know what happened in there. He threw a shorter right hand and I stumbled. I finished the round tough.

“Early in the fight I thought I hurt him with a hook and right hand combo. In the last round I caught him right on the chin. That wobbled him. He held on for dear life.

“I knew it was going to come down to a split decision. I felt in my heart that I did enough. He missed a lot of shots.”