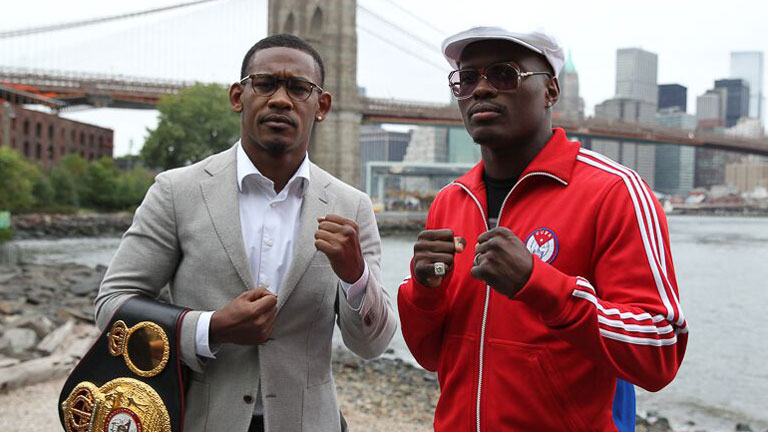 DANNY JACOBS admits he is feeling the nerves ahead of his fight with middleweight supremo Gennady Golovkin on March 18.

The once-beaten American is seen by most as the toughest test of Golovkin’s career to date, though the same can be said vice versa.

Given that ‘GGG’ holds the highest knockout percentage in middleweight championship history, Jacobs is understandably anxious as the days count down to their meeting at Madison Square Garden.

“I am feeling a lot of anxiety at this point.  Getting close to the fight – nerves are flaring up and I want to be able to go and tackle greatness,” he said.

“I want to go into Madison Square Garden and see my family and see my friends and see everybody there for me, and I’m really just waiting for that moment.  I am ready for my fans to be in my corner for the opening round and everyone standing up and cheering and when that first bell rings – just going at it.  It’s a big opportunity for me and I’m looking forward to it.”

Given that he hasn’t required the judges’ scorecards since 2008, Golovkin has proved himself one of the most dangerous punchers in the world today.

However, Jacobs himself is on a 12 fight knockout streak, which stretches back to the only loss of his career, a fifth-round stoppage defeat to Dmitry Pirog in 2010.

“Most people would say he has a lot more power but just because he has A+ or A- power and I have B+ or B- power, [that] doesn’t mean both guys can’t go down or both guys can’t get hurt,” he said.

“If you ask whose is better – I like mine better obviously.  It’s just a matter of going in there and putting it together because you can have all the power but can’t do anything with it.”

The best fight that can be made in boxing right now is Golovkin against Mexican superstar Canelo Alvarez – though that does not detract from how good Golovkin-Jacobs, a fight pitting the world’s two best middleweights against one another, is.

Golovkin’s team hope to secure a fight with Canelo for this year and constantly have to field questions on it, though Golovkin insists he is not looking past Jacobs at all.

For his part, Danny believes the Kazakh though did warn him against taking his eye off the ball.

“We don’t really talk about it.  We maybe laugh about it but for anyone to make plans past this fight whether it is his team or whether it is him himself, honestly I just feel like his focus should be 100% on me,” he said.

“It doesn’t really add so much motivation but it just adds to it.  I am self motivated and this fight is motivating in itself in what I can accomplish in fulfilling my dreams – that’s good enough for me but I think whether it is speculation or not, I just think it is foolish for one to do things like that – taking me for granted and I don’t think they want to get into that – planning before the fight happens.”