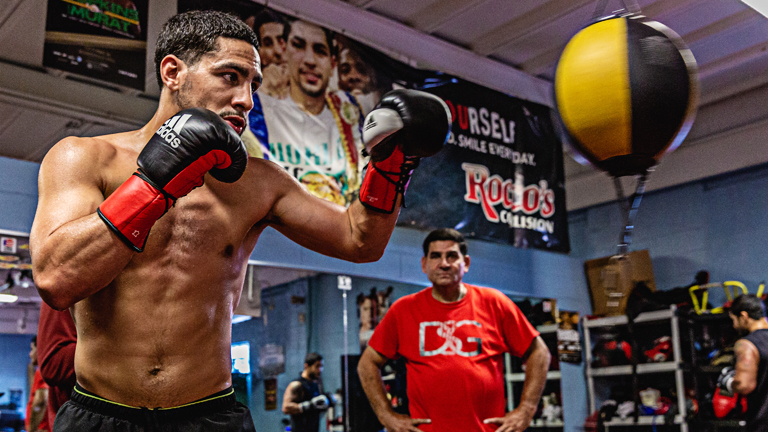 DANNY GARCIA doesn’t provide opponents with bulletin board material. He’s not the quote machine reporters would have him be. But every so often, he’ll offer a rare peak into his psyche, such as last February after his ninth-round TKO of Brandon Rios.

While Danny basked in the glow of victory and did a post-fight interview, fellow welterweight contender Shawn Porter stormed the ring and threw shade.

“This is the Danny Garcia Show!” Garcia informed Porter, drawing a roar from the Las Vegas crowd. More verbal blows were traded, which set the stage for what many consider a potential Fight of the Year this Saturday, September 8, on a Showtime Championship Boxing card presented by Premier Boxing Champions from Brooklyn’s Barclays Center.

The latest episode of the “Danny Garcia Show” will be for the vacant WBC world welterweight title. The winner will have near kingpin status in the sport’s richest division. A mega-fight versus Errol Spence, for all the marbles, could follow.

In the build up to the fight, Garcia, 30, 34-1 (20 KOs), cooled off and reverted to his usual form: that of a bland boxer. This uninspired approach may be poo-pooed by millennials, but there’s a method to the monotony. Garcia is an observer; the quiet one in the back studying your every movement unbeknownst to you. He even employs a voluble decoy to distract you from realizing you’re getting made.

Usually that decoy is his father and trainer, Angel Garcia.

Had the duo chosen football as their business, Danny would be Eli Manning to Angel’s Rex Ryan.

Today, Angel is holding court at the Garcia’s DSG Boxing Gym in Philadelphia as he, his sons Danny and Erik, and lifelong friend Miguel Ortiz, relax in the lounge adjacent to the gym.

“Porter’s going to do what he always does,” Angel moans. “Come in all wild.” Angel puts his head down and charges the cooler which, presumably, represents his son come this Saturday.

“Danny’s going to keep touching him, wearing him down. Porter gets real sloppy when he’s tired. If he jumps in and Danny catches the right spot…sweet Mary, mother of Christ. That bozo’s gonna be snoring.”

The room erupts in laughter. Angel’s confidence isn’t misguided. His deep-seeded belief began when Danny discovered boxing at age five. The younger Garcia would watch tapes of Julio Cesar Chavez and attempt to emulate him. When Danny was eight, Angel took him to the gym and began training him. His son blossomed, winning the under-19 national championship and the 2006 U.S. National Amateur title at 132lbs.

A close loss in the 2008 Olympic trial finals convinced Garcia to turn pro. On his way up the ranks, he beat names like Ashley Theophane, Nate Campbell and Kendall Holt, before facing Erik Morales for the WBC 140lbs title in 2012. Garcia overcame a valiant effort from the Mexican legend to win a unanimous decision.

Four months later, he notched a huge upset with a fourth-round TKO of Amir Khan. He then capped off a strong year by stopping Morales in a rematch. Next, he decisioned Zab Judah.

In September 2013, Garcia defied oddsmakers again, out-boxing a high-flying Lucas Matthysse. The win cemented his dominance at 140lbs and capped a run unseen in the division since the days of Kostya Tszyu.

Garcia eventually moved up to 147 and won the WBC world title. In March 2017, he fought undefeated WBA champion Keith Thurman in an anticipated unification bout. Thurman controlled the early action and played keep-away late to win a split decision.

“That was tough to take,” Garcia reflects, leaning back on a maroon leather couch. “If I started quicker, won one of the first three rounds, the fight would have been mine. It’s behind me now. I thought I finished like a true champion in that fight. That’s what I took from it.”

Although Garcia wanted an immediate rematch, his team urged him to take time off and enjoy the fruits of his labour. He spent much of the next 12 months in his Miami home (he owns another on the outskirts of Philadelphia) with long-time girlfriend Erica and his now three-year-old daughter, Philly.

Garcia’s many businesses kept him occupied as well. He manages both of his sisters’ music careers and owns DSG clothing. His Philadelphia investments include six rental properties and a lot he purchased in 2013 that houses a car shop, a car wash, barber shop, a clothing store, a music studio and the private gym where he trains.

Garcia shook off the rust against Rios, ending the match with a single right after a slow start. Then came the confrontation with Porter. If familiarity breeds contempt, the Garcia-Porter beef has been stewing for years. They’ve known of each other since the amateurs but never fought, as Porter competed at 165lbs.

“It wasn’t in Porter’s destiny to box,” Angel says dismissively. “He was supposed to be a football player but was too little for it. Danny was destined. So, you’ve got a natural gifted guy who was meant to be a fighter against someone made into a fighter.”

“The older you get, the more you’re supposed to go up in weight, not down,” he says. “He’s 30 years old and still fighting at welter after being 165 in the amateurs. I think he would be a bigger puncher if he moved up.”

“I don’t think Porter is a special fighter,” he continued. “He knows what he can do, trains really hard and comes prepared. But at this level, everyone comes prepared so that doesn’t matter.”

“Coming off the layoff, I wasn’t sharp against Rios,” Garcia notes. “Sparring for this camp has got me to where I need to be. We’ve got aggressive guys, short, awkward styles, guys who come in all wild. We’re ready for everything.”

Garcia-Porter isn’t just one of the most anticipated fights this year, it’s one of the best matchups that can be made in boxing.

“It’s going to be great to be world champion again,” Danny says. “Porter is a good fighter but this isn’t my biggest win. I mean, I’m going to make him one of my biggest wins but, on paper, it really isn’t.”

For Garcia, it’s just his 36th fight—or another broadcast of the Danny Garcia Show.