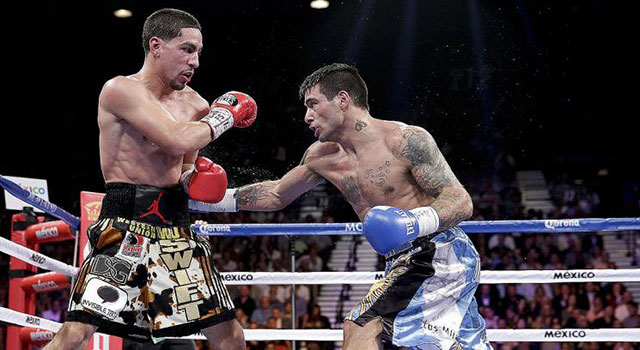 Garcia feels he will be stronger at 147lbs, writes George Gigney

DANNY GARCIA insists he is not worried about fighting Paul Malignaggi ahead of their clash at the Barclays Center in Brooklyn, New York on Saturday night.

Despite some, including Amir Khan, feeling the 34-year-old Malignaggi may spring an upset and beat Garcia, the Philadelphia native remains undeterred.

“I’m not really concerned about Paulie, at this point in my career if I’m 110% percent ready, I feel like I can adapt to anything and find a way to win,” he said.

Garcia maintains that he wanted to move to welterweight after his 2013 win over Lucas Matthysse, but is happy to have finally made the transition and plans on winning world titles in his new weight class.

“It feels great to be at 147. For the first time in a long time, I could worry about training to get better and not training to lose weight. I’ve been fighting at 140 my whole career,” he said.

“I feel like at 147, you’re going to see a more athletic Danny Garcia and [I’ll] be able to use my legs more, use my jab more and see punches clearer. When you drain yourself it’s hard to see punches, then you get hit with a lot of dumb punches because your vision is not clear.

“I feel like my vision is going to be a lot clearer and be able to move my head, see the punches better, use my feet. And I think I’m going to be a champion at 147, too. I know so.”

CLICK HERE FOR AMIR KHAN’S BREAKDOWN OF THE FIGHT