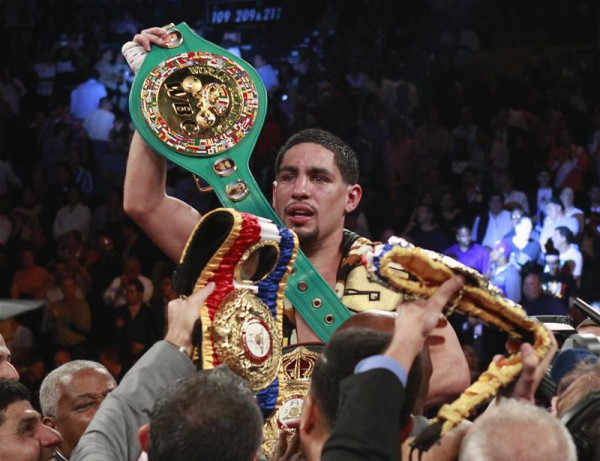 The reigning WBC, WBA and Ring Magazine world champion takes on Rod Salka this Saturday night and aims to come through the challenge unscathed so he can set up a showdown with Peterson.

The Washington native Peterson is also set to appear on the bill at the Barclays Center in New York this weekend, with Garcia aware victory for both is likely to see them in opposite corners next time around.

“At the end of the day, it’s what I want [a fight with Peterson] because I can say what I want, but you know, right now, I’ve got August 9, so I can’t look past anybody,” said Garcia.

“The same with Lamont Peterson, he can’t look past Edgar Santana. At the end of the day, we’ve both got to get these victories and at the end of the year or the beginning of next year we could do a unification bout,” he said.

The 26-year-old Garcia has taken some flak at his choice of opponent this time around as he steps in with the unheralded Salka, who has a record of 19 wins with three defeats.

However, the Philadelphia pugilist is refusing to underestimate his opponent, well aware that an upset could be on the cards if he isn’t at his best.

“I think it’s very important for me to go out there and look good on Saturday. I’ve got to go in there and look like a champion. I’ll fight at the Barclays Center. I love the atmosphere there. It’s a beautiful arena. I’m very motivated.

“I did everything right this camp. I haven’t made a lot of mistakes sparring, so I’m looking good. I’m looking sharp and come August 9 there’s going to be another excellent performance and I’m going to go in there and try to give my fans a knockout,” he said.

The bout will be a catchweight at 142 pounds, with the 31-year-old Salka believing that Garcia will not let doubts about his choice of opponent affect him come fight night.

“Honestly, at this level I don’t really feel like anybody listens. None of the fighters are really taking any kind of praise and any of that stuff. Like Danny says, at the end of the day, we’re two guys with two hands and we’re going to go in there and we’re going to fight,” said Salka.

“It really doesn’t matter what anybody is saying because that’s the facts. So, absolutely not, I don’t think there’s any more pressure. We feel pressure going in there to fight regardless.

The night’s action also sees Peterson square off with Puerto Rican hitter Santana, with middleweight Danny Jacobs – one of modern boxing’s great comeback stories after overcoming a rare form of bone cancer – competing in his hometown for his first world title against Jarrod Fletcher, with the WBA belt up for grabs.