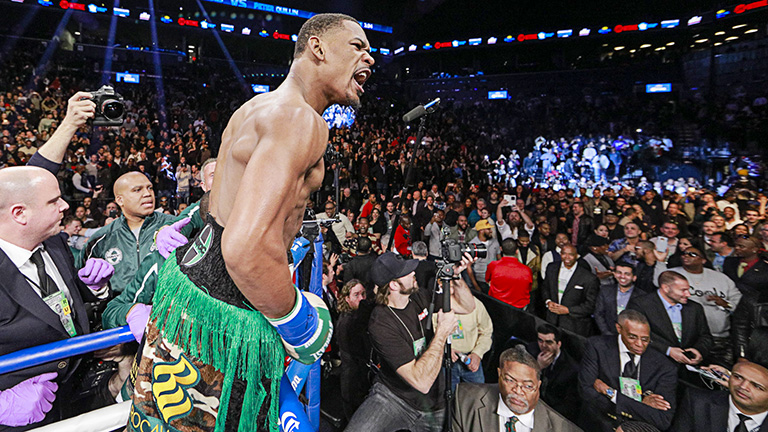 Going into the bout, the two Brooklyn-based fighters knew each other very well, having sparred countless rounds together in the gym, due to the fact that they share a trainer in Andre Rozier, who was in Jacobs’ corner for this contest (Derevyanchenko was cornered by Gary Stark Snr – one of Rozier’s assistants).

This familiarity between the boxers ensured a tight, tense battle, reflected in the official scorecards – 115-112 (twice) to Jacobs, and 114-113 to Derevyanchenko.

Jacobs started the fight impressively, thrusting out a stiff jab and forcing his previously unbeaten Ukrainian opponent to touch down on the canvas with his gloves after landing a right hand upstairs.

Derevyanchenko responded well to suffering the first knockdown of his career. In the second, he staggered Jacobs with a hefty left. The American, however, continued to spear Derevyanchenko with an effective jab, while also following up with his big right. Derevyanchenko, meanwhile, targeted the midsection when able to force his way up close.

Round six was an all-action affair, as both men let loose with hurtful strikes to head and body. The fight ebbed and flowed in the second half, though Jacobs’ jab remained the most eye-catching shot on show.

Derevyanchenko looked to be feeling the pace in the later rounds, yet he refused to stop throwing punches. In fact, he got the better of things when the pair began tussling on the inside in the final frame, but this late rally ultimately proved insufficient for the judges.

Next up for Jacobs could well be Canelo Alvarez, who holds the WBC and WBA titles at 160lbs. The Mexican superstar meets Liverpool’s Rocky Fielding up at super-middleweight in December, but a high-profile clash with Jacobs would likely entice him back down to middleweight next year.

“I really feel like I’m in my prime,” Jacobs said after the bout. “I showed true grit tonight, and I had another tank in me. [Canelo] would be a great fight for the fans. Let’s make the fight happen.”