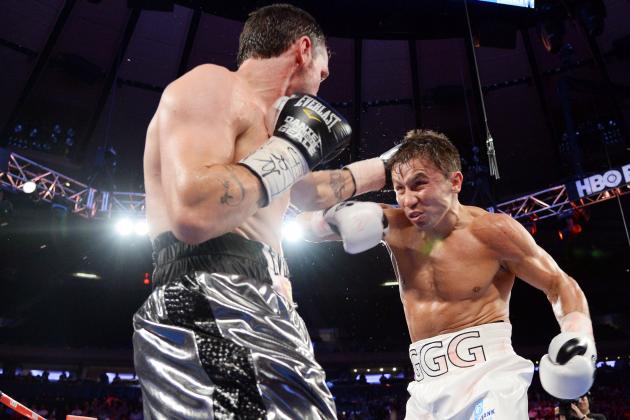 DANIEL GEALE spoke highly of Gennady Golovkin after being blasted out in three rounds on Saturday night at New York’s Madison Square Garden.

“I’m not a ashamed to say I lost to Golovkin,” said Geale about the WBA middleweight champion. “He’s one of the best fighters in boxing and certainly the biggest puncher in the sport. I did my best to come out strong but he was the better man tonight.  Want to thank my promoters Gary Shaw and Garrie Francisco for everything they’ve done for me and my family. I’m going to take a few weeks off and evaluate my future.”

In the co-feature, GSP heavyweight Bryant Jennings, 19-0 (10 ), won a a split decision against former undefeated contender, Mike Perez, 20-1-1 (12) to capture the WBC No.1 ranking and mandatory position to challenge the winner of champion Bermane Stiverne vs. Deontay Wilder.

“I felt good going down the stretch and it was the difference in the fight,” said Jennings. “I won this fight and that’s all that matters. I’m ready to fight for the world championship and I’m not leaving any stone un-turned. I’ll be back in the gym on Monday.  My promoters Gary Shaw and Antonio Leonard are going to make my dreams come true with a title shot. I’ll be ready to go!”

“I have nothing but great respect for Daniel Geale who did his best tonight.” said Gary Shaw. “He fought hard against a great fighter who I believe is a pound for pound champion in Golovkin.  Jennings proved his on the championship level and is now the mandatory to fight for the WBC title so we’ll see what transpires in the next few weeks. All I know is my guys fought hard tonight and the’ll both be back stronger then ever.”