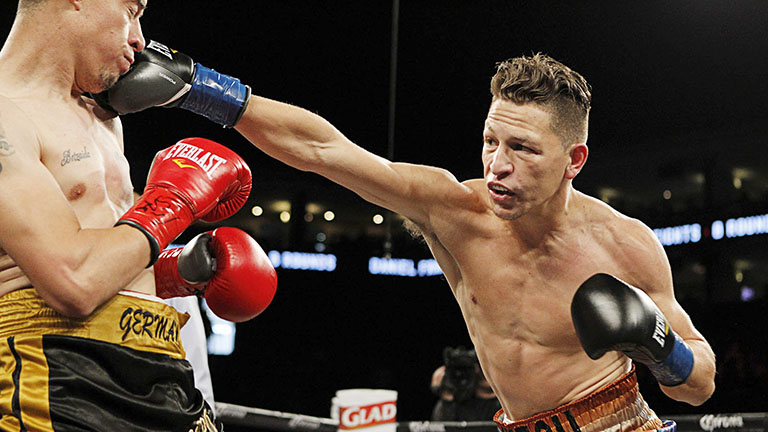 Daniel Franco and Jose Haro tell Lee Gormley about life after boxing and the story of a near-tragic injury.

Long gone are the adrenaline-filled nights centred around climbing the ring ropes in front of friends, family and thousands more spectators.

The buzz of fighting, lacing up his gloves and going to battle with another man has been reduced to nothing more than memories, many fond ones of course, but others serve as more painful reminders of how it all came to a sudden unexpected end.

It was one summer night in Iowa where it all finished abruptly for the then hopeful featherweight prospect.

The now 27-year-old suffered a knockout defeat to Jose Haro in the eighth round of their encounter, his second such loss inside just four months during the course of 2017. This second stoppage in three bouts proved to be a life-altering moment in both his career and young life.

Franco was later placed into an induced coma in a bid to save his life and a significant portion of his skull removed during vital surgical procedures. His boxing career is now over as a result but that’s only a minor setback of traumatic circumstances that saw him almost lose his life.

“It’s been very difficult but there is no other way,” admits an obviously saddened Daniel Franco as he reminisces over his professional boxing career.

Fighting, at least inside the ring, is over for the American. But it could’ve been a lot worse and Franco is now optimistically embracing his second chance at life after boxing.

“I am doing great in regards to my recovery,” he continues with a positive personal spin on what has been a long, gruelling road to rehabilitation. “The only problems I have are some memory issues and less strength on the entire right side of my body, as well as less sensation.”

A quick scroll through Franco’s social media platforms reveals a stark and welcome distance from his past personal turmoil. Harrowing injury images he posted previously and widespread calls for prayers from those close to him are replaced by wide smiles and good times with new friendly acquaintances in the next chapter of his life.

All this in spite of the complete abandonment of his former promoter RocNation, whose shameful oversight during such a turbulent and almost fatal time in Franco’s life was inexplicable for such a financially powerful organisation.

“There has not been a word from RocNation or any assurance that they will come forward in the future,” Franco outlines.

“The last that I heard from them, indirectly, was when they contacted my father to take down the ‘#fuckrocnation’ post on Instagram. They said they would call in a couple days. A week later and I never heard anything back from them so I posted the photo back on Instagram.”

Currently enrolled in his local community college after returning from a personally uplifting 2018 stint studying abroad in London, he is heading towards university while admirably giving back to the local community.

Unlike those previously involved in supposedly overlooking Franco’s pugilistic career, the former fighter is looking out for others and helping those in need.

“I work at the boxing gym with my days off from school,” Franco explains of his now busy schedule, during which he trains a Parkinson’s disease patient, a brain cancer survivor and an amateur.

“It’s been great to help teach boxing and to spread my knowledge.”

What of that promising trip abroad? “London was such an amazing experience that showed and taught me so much.

“From waking up in a hospital bed in Nebraska to waking up in an English speaking city on the other side of the world in less than a two-year difference.”

Franco’s turnaround has been nothing short of inspiring and his story has been told to a wider audience through a Sports Illustrated documentary.

A culmination of events helped pave the way for his beneficial trip to the UK, including an award fund from the ABC Convention in Florida, his mother’s helpful down payment and working as an Uber driver helped finance his studies.

“I was able to make it happen. I had no money to my name when I returned but the experiences throughout those short three months were life-changing,” he said.

“I saw so many beautiful places and realised how little of the world that I know. I have been contained to the world of boxing and am just now exploring what the rest of this world has to offer.”

While Franco’s career came to a premature finish under near tragic circumstances, with physical injuries signalling an immediate end to any future fights, his opponent that night has been unable to return to the ring due a mental barrier.

Although officially victorious in the pair’s saddening match-up, Jose Haro expectedly felt no sense of pride in claiming the USBA featherweight belt.

“I felt like I didn’t win the fight because of what happen to Franco. I couldn’t celebrate the way that I wanted to,” admits the reluctant victor that night.

“It felt like I won the title for nothing. But I’m happy Franco is doing better.”

Lingering business problems from that fateful night had hindered any potential chances for Haro once again fighting but he will finally do so in August this year.

“I would have loved to fight after the Franco fight but I just wasn’t getting calls to fight. In a way it was good because for the few first months all I was thinking was about Franco’s health.

“But I’m training now so I can get ready to fight plus I also have five kids and one on the way so they keep pretty busy,” Haro jokes, as he prepares to make a comeback and also welcome a new family arrival.

The 27-year-old now owes in excess of £500,000, an overwhelming amount for a boxer now unable to continue his craft.

Perhaps later than many anticipated, Franco’s team recently launched a claim against the label, on the basis of a reckless schedule and inadequate post-fight medical procedures on their part. They are now seeking undisclosed damages.

Having penned a deal with the company in 2015, Franco had his hand raised on five occasions under their banner but, despite falling ill and being out of the gym, RocNation refused his request to have a scheduled clash postponed. He was knocked out in three rounds of the fight in question by Christopher Martin.

Seven weeks after he was back in the ring as the matchmaker wanted him to “keep busy.” The American prevailed but was thrust back into action in the near-fatal encounter with Haro less than month later.

Two skull fractures, a separate brain bleed and a two-week coma later, Franco was extremely fortunate to be alive.

Obviously, even for a fighter at heart, there are much more important aspects of life than boxing. Franco’s new everyday routines no longer involve the gruelling training regimes and preparations for trading blows with another man in a ring. Instead, he’s readying himself for a future that he once looked unlikely to have. It’s a life without boxing that lies ahead, but it’s a life first and foremost.