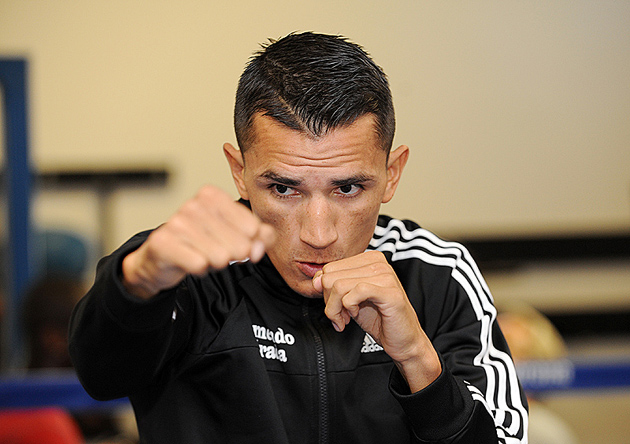 LIGHTWEIGHTS Kevin Mitchell and Daniel Estrada will clash on January 31, with the WBC silver title, and more importantly a shot at the real WBC 135lb belt, on the line. Estrada of Mexico has a good record at 32-3-1 (24) and a number of people are expecting the 29-year-old from Mexico City to give Londoner Mitchell, 38-2 (28), a hard fight or possibly even defeat the 30-year-old.

Go back a few months, to before Estrada was stopped by Omar Figueroa in a previous shot at the WBC crown, and Estrada’s manager, Cuitlahuac Maldonado Rosales would have been one of them. However, since that August night when Estrada was halted in the ninth-round, the fighter and the manager have been through an acrimonious parting of ways. Rosales goes as far as to say Estrada “betrayed” him.

Perhaps allowing this to affect the impartialness of his thinking, Rosales is predicting a rough night for his former charge when he meets Mitchell later this month.

Here is what Rosales said to Boxing News on the subject of the upcoming fight and his former fighter:

Q: How much does Daniel Estrada know about Kevin Mitchell and will he be nervous in your opinion, having his first fight in the UK and only his second pro fight outside of Mexico?

Cuitlahuac Maldonado Rosales: “Daniel Estrada does not know anything about Mitchell. Estrada thinks he is a top fighter, but in my opinion, he was protected and never really had to take care of anything himself during his career since the amateurs. I looked after him since then, and after twelve years, he betrayed me, just before the Omar Figueroa fight. I think Estrada believes he is a tough fighter and capable of beating Mitchell, but he [Estrada] is not as good as his record makes out. Yes, he will be nervous. Before [the split] he had, for over 10 years, a full team and corner behind him. Now, going into the Figueroa fight, he had just one [familiar] corner-man with him.”

Q: Estrada is nevertheless known as a warrior who can punch hard.

C.M.R: “He has no real speed. He also takes a lot of punches – right hands especially – and his punch is not as powerful as he thinks.”

Q: What went wrong for him in the Figueroa fight in your opinion?

C.M.R: “First I must make it clear, that fight was not a war, but a one-sided fight with Figueroa ending the fight whenever he wanted to do so. Estrada’s mistake was not betraying me, but taking that fight. I knew when the contract was signed Estrada would lose inside the distance. I believe Mitchell will stop Estrada, you will see I’m right.”

Q: You do not think Estrada has what it takes to become a world champion?

C.M.R: “Estrada thinks he can become a world champion, but right now and in the immediate future, he will not. He is a good fighter, who had good administration, a good team around him. But to become a world champion, you need to be more than a good fighter; you need to be a great one. And Estrada does not have a good team looking out for him any longer.”

Q: What would you say his best win was?

Q: So how do you see the fight with Mitchell going? Do you see a good action fight?

C.M.R: “I do think this is gonna be a good fight. But Estrada has problems with fighters who use a lot of movement. If Mitchell sees this and boxes accordingly, and if he punches and moves and comes forward and gets on the inside, Estrada will not be able to control things. I feel Mitchell will win if he fights the right fight, and he will win inside the distance.”

Q: You see no way in which Estrada can win?

C.M.R: “I think the KO is the only chance he has, but I think the result will be clear and in Mitchell’s favour.”

BOXING NEWS – established in 1909 – comes out weekly and is loaded with exclusive interviews and educated boxing insight. Don’t miss an issue.