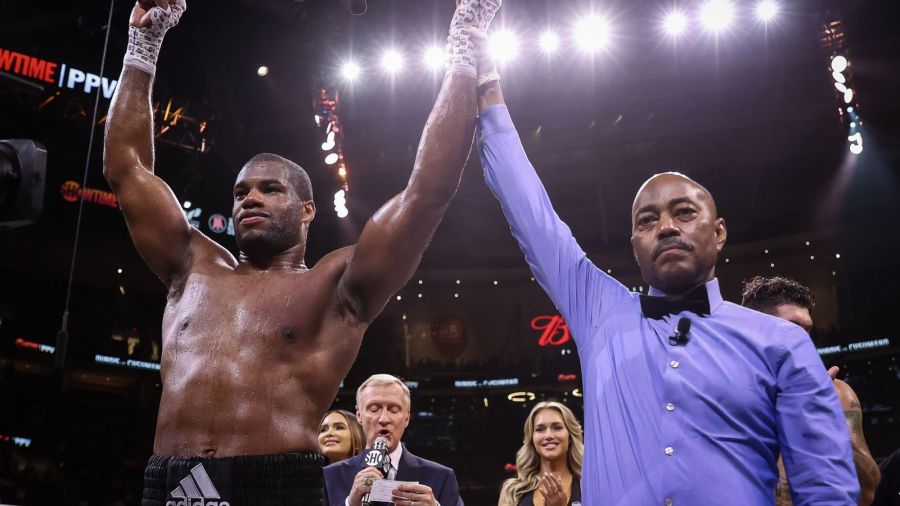 IF nothing else, Daniel Dubois can take a bit of pride in the fact that, unlike some of his countrymen in recent times, he has managed to pull off his American debut without so much as a hitch. The hard-hitting heavyweight contender walked through woebegone Juiseppe Cusumano, dropping the Virginian three times en route to a predictable first round stoppage at the Rocket Mortgage FieldHouse on the undercard of the Jake Paul-Tyron Woodley circus bill. Referee George Nichols halted the bout with 53 seconds left in the opener, right after Dubois unleashed a furious pair of right hands that forced Cusumano to touch the canvas for the third and final time.

It was the sort of bout that was both pointless and necessary at the same time; pointless because the bout was a bald-faced mismatch, and necessary, at least from a risk management perspective, since it represents the first option on Dubois’ multi-fight deal with the American cable network Showtime.

Considering the Cheshire Cat grin writ large on Dubois’ face after he had his hands raised, the fight may have offered something of a psychological balm as well. This was his second win in a row since his knockout loss to compatriot Joe Joyce last year, a bout that led many, unfairly, to question the fighting spirit of the 23-year-old. After all, for a time, Dubois was considered by many to be at the head of the pack of up-and-coming British blue-chip talents.

Dubois’ veteran promoter Frank Warren, who also co-handles Tyson Fury, is betting that a change in scenery may not only help rehabilitate his charge’s image, but also re-ignite his career.

“The greatest is still to come,” Dubois said post-fight, adding that he would not mind taking on Trevor Bryan next. “This is just the step in the right direction.”

There are few female boxers today more accomplished than Puerto Rico’s Amanda Serrano, but her latest dominance inside the ring leaves one to ponder when she might face someone with a pulse – someone on the level of, say, Katie Taylor.

Serrano bullyragged Yamileth Mercado over 10 rounds of their featherweight [WBO and WBC] title bout. Save for eating a stray right hand or two, Serrano had her way with her Mexican adversary. To be fair, Mercado, a belt-holder at the super-bantamweight limit, moved up in weight to challenge Serrano. Gumption, however, does not necessarily translate into success, as evidenced by the wide scorecards. Judges Stacy Blevins, Dana DePaolo, and Jaime Garayua awarded the fight to Serrano with tallies of 98-92, 99-91, and 97-93, respectively.

Serrano, who has not lost in nearly a decade, put her stamp on the fight in the 10th and final round, battering a bloodied Mercado with a sustained sally to the body.

If Jake Paul has plans of keeping up his grift for much longer, he will have to perform better than he did in Saturday night’s headliner. Against former UFC champion Tyron Woodley, the 24-year-old YouTube celebrity-turned boxing heel met his most formidable challenge yet in an eight-round cruiserweight contest (contracted at 190lbs). More than 16,000 fans were in attendance, ostensibly to cheer on Paul, who grew up in the greater Cleveland area.

Despite a considerable disadvantage in height, Woodley stunned Paul a couple of times with overhand rights and, moreover, earned the distinction of being the first opponent to take Paul to the distance. Woodley, however, will have to settle for a moral victory.

With the fourth round winding down, Woodley, St. Louis, Missouri, connected on his best punch of the fight: a booming right cross that sent Paul careening into the ropes and which should have been called a knockdown by referee Nichols. From then on Paul, who also showed signs of extreme fatigue, utilised his reach while fighting exclusively on the backfoot. Woodley, for his part, could not capitalise on his success in any consistent fashion.

After the bout, both fighters entertained the idea of a rematch, although Paul, amid a flurry of excuses, hinted that he may take a break from boxing.

Montana Love was the saving grace of a squirm-inducing, hokum-filled night. The 26-year-old super-lightweight southpaw put on a show, outboxing, then beating down, former belt-holder Ivan Baranchyk over seven rounds (set for 10). Baranchyk’s corner threw in the towel during the break leading into the eighth.

With a few seconds left in the seventh round, Love, a native of Cleveland, landed a picture-perfect counter left uppercut that immediately sent Baranchyk crumbling to the canvas, an image that mirrored one of the many knockdowns the Belarusian suffered in his hellacious two-way war against Jose Zepeda last year. This time, thanks to the timely intervention of his trainer Pedro Diaz, Baranchyk, who had no answer for Love’s expert movement and stiff one-twos, was spared from incurring any more damage.

Tommy Fury may have the name, but if his American debut was any indication, he is still raw as a plate of steak tartare. The Manchester native was never once troubled in his four-round cruiserweight bout (contracted at 180lbs) against boxing greenhorn Anthony Taylor on the way to a unanimous decision win. Judges Blevins, DePaolo, and Rogers all scored the bout 40-36 for the 22-year-old Fury. But the sheer amount of sloppy, telegraphed punches and half nelsons from both parties left much to be desired. And yet, despite the underwhelming performance, Fury may have earned himself a shot to face the gabby Paul.