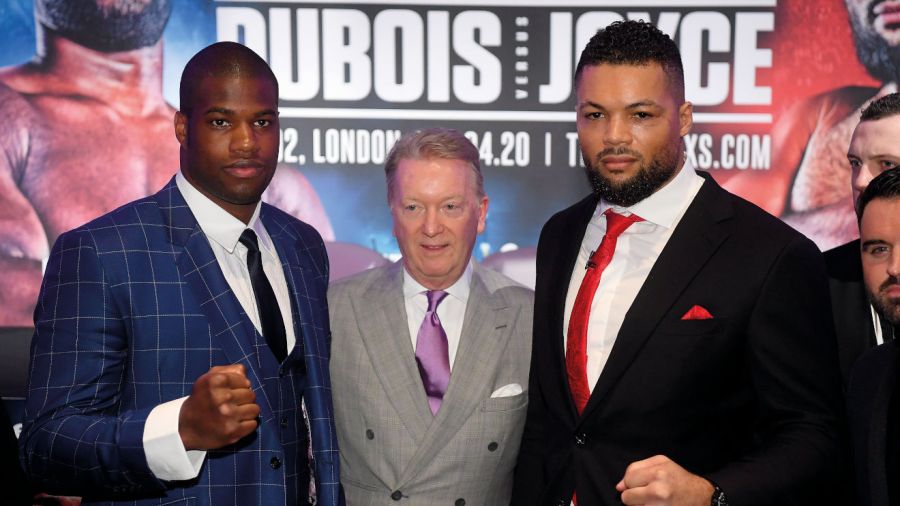 DUBOIS: At 23, Dubois is the younger man by 12 years. This also translates to him being the far fresher of the two, as his amateur career was not as extensive or exacting as Joyce’s. Muscular and barrel-chested, the prodigious youngster is an imposing physical specimen.

JOYCE: Although both boxers are hulking giants, the 6ft 6in Joyce is marginally taller than Dubois, while also possessing a slightly longer reach at 80ins. Despite being the heavier of the two, Joyce is a supremely agile athlete, as evidenced by his celebratory capoeira skills.

EDGE: While they are relatively similar in terms of size and stature, the age difference between the pair is substantial – and it favours Dubois.

DUBOIS: Enjoying success on both the domestic and international front, the Greenwich heavyweight compiled an impressive 69-6 record as an amateur, though primarily at junior and youth level. Like Joyce, he had his professional debut in 2017. With 15 contests under his belt, he has made four more appearances as a pro compared to his upcoming foe. However, the duo have contested the same number of rounds (43). The furthest Dubois has gone is 10 sessions (once), which is the only time he has fought past the five-frame mark. In Kevin Johnson and Razvan Cojanu, he has beaten two former world title challengers.

JOYCE: The vastly decorated “Juggernaut” excelled in the amateur ranks. His magnificent medal haul includes two ABA/England Boxing Elite golds (2012 and 2014), a European bronze (2013), a Commonwealth gold (2014), a European Games gold (2015), a World bronze (2015) and an Olympic silver (2016). Additionally, he assembled an excellent 14-2 ledger in the World Series of Boxing from 2012 to 2016, including a victory over Filip Hrgovic and a loss to Oleksandr Usyk. In the pros, he has completed a 12-rounder on one occasion, and has gone further than five rounds in two other bouts. Joyce, who has twice performed in the US as a pro, has had two fights for a major championship (Commonwealth), which is the same number as Dubois (one British, one Commonwealth). The Putney resident has faced the better opponents overall – most notably ex-world titlist Bermane Stiverne and previous world title contestant Bryant Jennings.

EDGE: The advantage is with Joyce in this department, on account of his superior amateur credentials and the loftier class of his opposition.

DUBOIS: The fighter known as “Dynamite” has dominated everyone he has come up against so far, scoring some highlight-reel KOs along the way. His win over Nathan Gorman is the standout success on his CV. As the headline act in a highly anticipated clash of unbeatens, there was a lot of pressure on Dubois’ broad shoulders. He handled this weight of expectation superbly by knocking Gorman out in the fifth round.

JOYCE: Like Dubois, Joyce has never come close to losing. Stopping Stiverne in the sixth was a noteworthy achievement. He showed his big-name adversary no respect and stamped his authority onto proceedings. The way in which he blasted past Alexander Ustinov in just three rounds was also eye-catching.

EDGE: When prevailing against Gorman, Dubois demonstrated that he has multiple facets to his game. It was a stellar showing.

DUBOIS: It is merely nitpicking, but Dubois was not able to get Johnson out of there, although only three people ever have. He comprehensively outpointed the durable veteran, yet never looked like securing a stoppage. He also admitted himself that he was too gung-ho and overly open at times against Richard Lartey. Nonetheless, he still triumphed in style with a fourth-round knockout.

JOYCE: Jennings was a fine scalp for Joyce, so it is harsh to criticise him, but he did swallow a few unnecessary shots in what was a competitive tussle. In spite of this, he was a worthy winner via unanimous decision.

EDGE: Some danger signs were evident for Joyce in his match with Jennings, so Dubois shades this one.

DUBOIS: A devastating puncher to either head or body, Dubois’ right hand is a destructive weapon, especially when launched in the form of a hook. The reigning British and Commonwealth champion is an explosive, poised and fluent operator, as well as being a ruthless finisher. He pumps out powerful jabs, and has displayed solid whiskers whenever he has been hit.

JOYCE: Dubois may be the bigger one-punch hitter, but Joyce’s KO ratio is almost equal to that of his rival (91 per cent against 93 per cent). Undoubtedly, Joe’s greatest attribute is his outstanding work rate, which is uncommon for a heavyweight. Boasting an incredible engine, the marauding Londoner relentlessly marches forward and unloads a multitude of thudding blows both upstairs and down. Jolting jabs and thumping two-fisted assaults drain the energy from his opponents and erode their defences. Strong and steely, he also has a good chin.

EDGE: Both fighters possess punishing power, but Joyce’s prolific punch output is unique and remarkable for a man of his significant size.

DUBOIS: Having got rid of the vast majority of his foes in the early rounds, it will be interesting to see how Dubois reacts if Joyce is able to stand up to his strikes and take him into the later stages of the fight, while still pressing forward himself.

JOYCE: While Dubois can be tagged, Joyce has been known to ship more punches. He has a ‘take one to land one’ mentality, but employing this approach against the huge-hitting Dubois will be fraught with peril. Joyce has been labelled as one-dimensional, yet this one dimension is very effective.

EDGE: Joyce’s manner of fighting makes him hittable, and Dubois will fancy his chances of taking advantage of this.

Joyce will bring the heat from the get-go, while Dubois will be happy to oblige. Heavy jabs will be swapped and fierce follow-ups will be exchanged. Joyce will be aiming to test Dubois’ tank by dragging him into the final third of the 12-rounder and maintaining a torrid pace, but in order to do so he will have to avoid shipping too much punishment. Ultimately, this won’t be the case. The pick is for Dubois to get through with enough damaging shots to force the referee’s intervention just past the halfway mark.