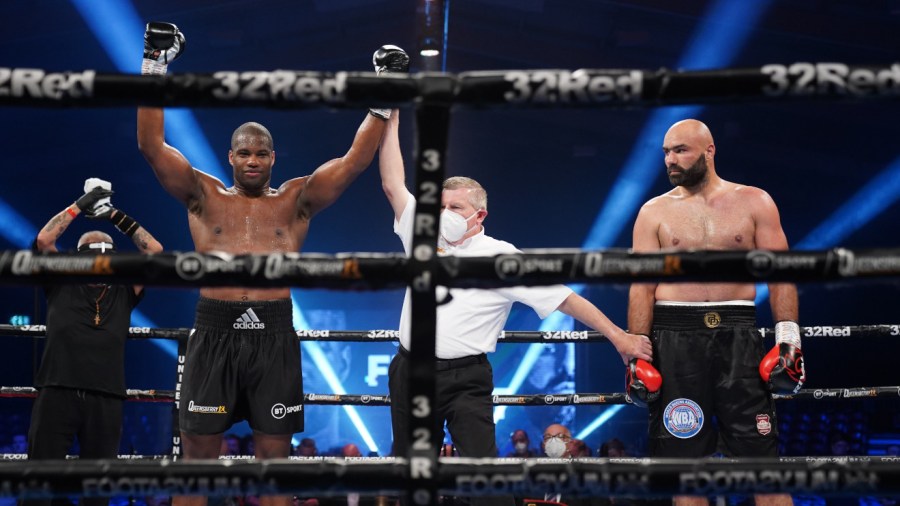 IN his first fight since losing to Joe Joyce just over six months ago, Daniel Dubois got back to winning ways by dispatching Bogdan Dinu in emphatic style at Telford International Centre.

A fractured left eye socket saw Dubois succumb to Joyce in the 10th round in November last year, but against Dinu, the Greenwich heavyweight showed no ill effects from this loss.

Boxing positively from the outset, Dubois pumped out jabs in the opener, as well as smartly mixing his shots to head and body.

With barely 20 seconds gone in round two, Dubois uncorked a clattering right hand that connected square on Dinu’s chin, sending the big Romanian down heavily by the ropes. The 34-year-old visitor attempted to stagger to his feet but failed to beat the referee’s count. The time of the knockout was 0-31.

After getting off to the best of starts with his new trainer, Shane McGuigan, Dubois was understandably delighted.

“It’s been a rough ride [since the Joyce defeat] but I’m glad to be back,” the 23-year-old said. “There were some thoughts going through my head [about the Joyce fight] but I just listened to Shane’s instructions. It feels so good [to get the victory]. I want to get back in the mix. I’m learning new things in the gym, so I’m going to get there.”

When asked whether a rematch with Joyce is his main priority, Dubois admitted that gaining revenge over his conqueror is something that he has his sights set on.

“I want to clear that up,” the former British and Commonwealth champion stated. “I want to have the re-run. I need to set it right. I need to keep listening to Shane and be the best that I can be. I’ll fight whoever they bring for me – I’ll knock them all out.”

With Joyce being lined up for an outing at the end of next month – potentially against Tony Yoka or Carlos Takam – Dubois will seemingly have to wait for the chance to avenge his sole career setback. Instead, next up for the powerful Londoner could well be America’s Trevor Bryan, who, like Dubois, holds one of the WBA’s watered-down titles at heavyweight.