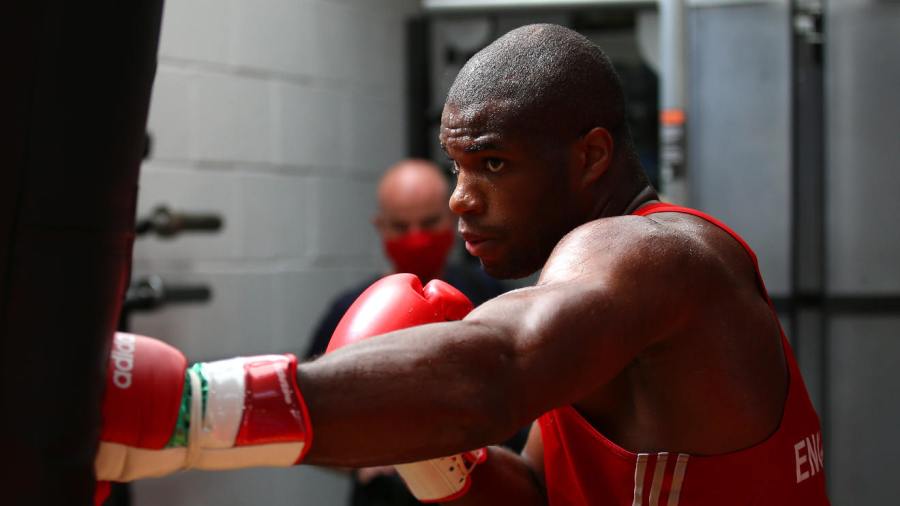 DANIEL DUBOIS and Tommy Fury make their Stateside debuts on Sunday night (August 29). Showtime and BT Sport screen a show from Cleveland’s Rocket Mortgage FieldHouse that also features women’s pound-for-pound star Amanda Serrano defending featherweight supremacy against Yamileth Mercado. Frank Warren says the US broadcasters have wanted to show Dubois for a while. As for Fury, the idea is to build up a fight with Jake Paul, who makes his fourth professional start against a fourth non-boxer, this time in the shape of 39-year-old former UFC champion Tyron Woodley. Tommy Fury is matched with Anthony Taylor, whose sole pro fight ended in a points defeat four years ago, and Daniel Dubois meets Joe Cusumano. Dubois, 16-1 (15), gets his wish to fight in America, nine months after the 23-year-old’s career was left in the balance by an eye injury from Joe Joyce.

Once Dubois was given the all-clear to box again, Warren brought him back in June with a perfect confidence-builder against Bogdan Dinu. The 34-year-old Romanian had a decent 20-2 record, the defeats coming against Jarrell Miller and Kubrat Pulev. Dubois decked him with a second round right hand and though the Dinu corner implored him to get up, he stayed on his knees. That was a promising start to Dubois’ relationship with new trainer Shane McGuigan.

This weekend is a fight that can be billed as a clash of knockout specialists that Dubois will surely win early. The 6ft 4ins Cusumano, raised in Sicily, brought up in New York and now based in Danville, Virginia, has never been stopped in his 19-3 (17) career.

But he’s never fought anyone who hits like Dubois – and Cusumano likes to stand and trade punches. Ominously for him, Dubois gets most of his knockouts when opponents trade with him. Now 33, Cusumano has been a pro for 11 years. He had battles with alcohol after the loss of trainer Robert Matney and Andy Touchstone a few years ago.

Cusumano has never been anywhere near world class, apart from when sparring Deontay Wilder, and his ambitions were dented by an eight-round points loss to veteran southpaw Steve Vukosa (11-1) in August, 2019.

Vukosa was a 42-year-old who won the Golden Gloves title in 2000, but whose pro career has been wrecked by knee injuries. He knew enough to outpoint Cusumano, who weighed a career-heavy 241lbs. Vukosa was able to make him reach and fall onto punches. That was how the third-round knockdown occurred; Cusumano lunging in with a right and being beaten to the punch by a short right hook. That was decisive on the cards, with Vukosa winning with 76-75 (twice) and 77-74.

Cusumano learned from that, shedding 16 ½lbs before returning 15 months later to fight on the Mike Tyson-Roy Jones Jnr card last November. Promoter Jimmy Burchfield reportedly offered Tyson £1 million, along with a share of the pay-per-view takings, to fight Cusumano; a good publicity stunt.Of course the offer was declined and Cusumano instead went in with 40-year-old Gregory Corbin (15-3).

Corbin had lost his previous three, to Charles Martin, Filip Hrgovic and Stephan Shaw. Cusumano produced an exclamation-mark finish in the sixth, laying Corbin flat out on his back with a right-hand piledriver. Cusumano, though crude and predictable, can crack.

That fight went ahead hours after Dubois was beaten by Joyce. The manner of that loss, Dubois taking a knee in the 10th with his left eye badly damaged, meant most of the post-fight debate was about the loser rather than the winner.

The opinion of football writers and self-appointed social media experts will have been easier to shrug off than the words of fellow fighters, who questioned whether Dubois belongs in their hardest of worlds. That win over Dinu was definitely a relief. We don’t see too much emotion from Dubois usually, but he was beaming from ear to ear after dispatching Dinu. He will be smiling again on Sunday night. Dubois can win inside three rounds.

Amanda Serrano, 40-1-1 (30) and from Brooklyn, still hopes to take on Katie Taylor and returns to boxing after winning an MMA bout in June.
Nine years younger, the 18-2-2 (5) Yamileth Mercado, who steps up from 122lbs, says she is part of “a new generation” but on the evidence of her ninth-round KO of the decent Daniela Bermudez in March, Serrano has plenty left. The southpaw box-puncher has too much quality for the Mexican in every department and can stop her in the middle rounds.

The Verdict Not a card for the hardcore but plenty will watch.