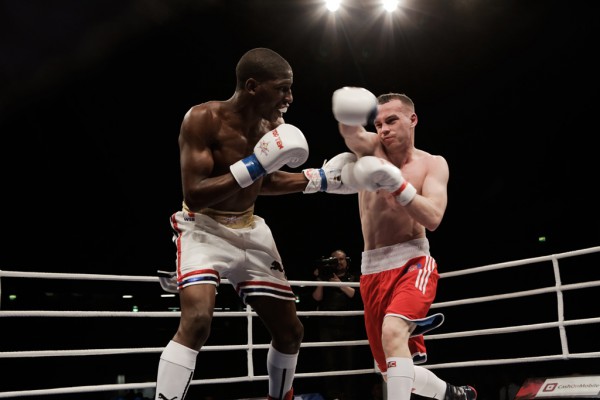 THE Cubans have an unrivaled reputation in amateur boxing. When their team came to the Copper Box in London on April 16 they proved why it was fully deserved. It proved a harsh lesson in excellence for the British Lionhearts as they lost their last home match of this season of the World Series of Boxing 5-0.
The star performers of the Cuba Domadores were light-welterweight Yasnier Toledo Lopez and heavyweight Erislandy Savon. Britain’s Sam Maxwell is a quality operator, after all he’s done 10 rounds with Vasyl Lomachenko in the WSB and beaten Albert Selimov in the past. But Toledo was fast and hit astonishingly hard, more due to his superb speed and timing than raw power. He tipped Sam to the side with his a lead southpaw hook at the end of the first round. He’d found the key to unlocking Maxwell’s defence, moving back with deft footwork only to dart in with punishing counter-attacks. The Liverpudlian rallied in the fourth round, catching Toledo then and the Cuban felt those shots. But Yasnier turned on the style in the fifth and last round. Sam charged on to a stiff right. Toledo capitalised expertly, smashing in punches, handing him two counts before halting Maxwell with 21 seconds left in the contest.
Erislandy Savon, like the rest of his team mates, boxed with self-composed swagger. A blistering right uppercut-left hook combination whipped Ionut-Mirel Jitaru’s gumshield from his mouth and deposited the Romanian in a heap to end it in the second round.
There were nevertheless promising signs in a young British team. Welsh bantamweight Sean McGoldrick lost unanimously to Andy Cruz but he started well, taking many of the Cuban’s punches on his gloves and thumping hooks into his body. The judges’ favoured the Cuban’s relaxed style but there was little to separate them.
Two England Boxing Elite championship entrants, Troy Williamson and Joe Maphosa, made their WSB debuts a week before the national competition. Middleweight Williamson came in at short notice to take on Arlen Lopez. The Darlington man put in a solid, gritty performance. The Cuban shifted his stance, timed his shots well to knock Troy over. Even when Williamson caught him with a hefty right, Arlen’s instinctive counter lashed in to put the Englishman down. Under the circumstances Williamson did well to see out the bout, the wide points decision went to Lopez, 50-44 and 50-43 twice.
Light-flyweight Joe Maphosa lost a split decision to Joahnys Argilagos in a performance that still bodes well for his international future.