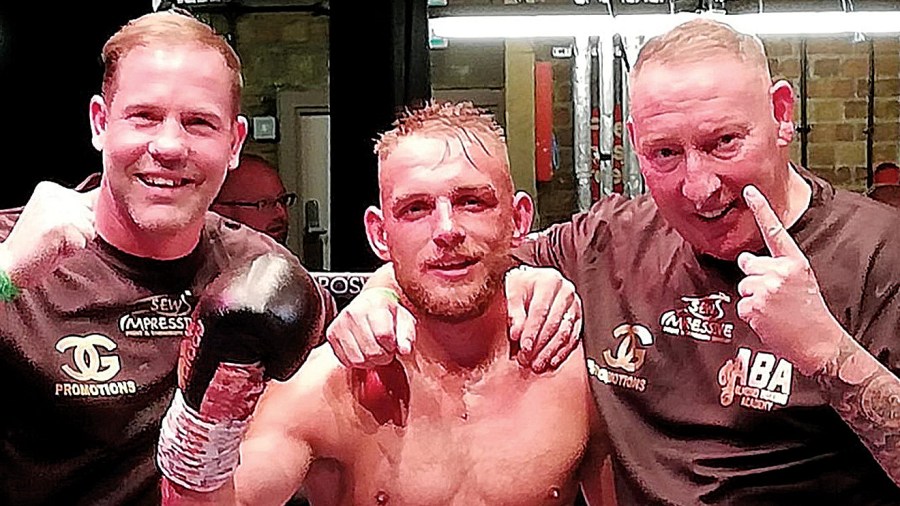 TOMMY FRANK makes his first defence of the British flyweight championship on Sunday (April 3). Fightzone televise from the Magna Centre in Rotherham where the 28-year-old from Sheffield puts the 112lbs belt on the line against Craig Derbyshire, who’s looking to write his own Rocky story.

The 30-year-old from Doncaster has only eight wins in 39 fights (three draws). One of his 28 losses was inflicted by Frank, in Sheffield in April, 2017.

Frank took away Derbyshire’s Central Area super-flyweight title with a 97-93 points win and both fighters are agreed, much has changed since then, though what hasn’t changed is that Frank has a height advantage of around five inches.

Frank went into that first fight as a six-fight novice yet to go beyond four rounds, while Derbyshire was still learning his trade.

Derbyshire has won three of five since, including a points win over Joe Maphosa (10-0) last September that regained the English super-flyweight title.

Four years earlier, Maphosa had outpointed Derbyshire over four rounds, but over 10 and with notice, Derbyshire won a split after scoring a first-round knockdown.

There have also been upset wins over Lee Clayton (6-2) and Nathan Reeve (12-2) – the former up at bantamweight – since that first fight with Frank five years ago.

Every time Derbyshire wins, it’s an upset, as Frank acknowledged. “Fair play to him,” said the champion, one of boxing’s good guys. “He’s done it the hard way. He has always been in the away corner and has finally got the shot he wanted. He’s very, very game and if you give him a chance he will take the fight away from you.

“I’m a completely different fighter [now]. It’s like I’ve gone from a boy to a man. I have had those 12-rounders and I have changed my style as well.”

Frank, who’s adopted a more aggressive style in recent fights, has also had a pair of losses since that first fight, both inflicted by Mexico’s Rosendo Hugo Guarneros (19-3-2).

Frank was ruled out of their first fight with an injured shoulder and lost a split in the return after being outworked by an opponent who had previously been outboxed by Sunny Edwards.

Frank had Windle over in the second with a lead right hand and hurt him to the body, but Windle kept rallying and after the 10th, Glyn Rhodes MBE told Frank: “Switch on. Why are you getting involved? Everything long.”

Derbyshire is hoping Frank gets involved on Sunday, telling Boxing News: “I hope he stands and fights and doesn’t run away, like he did in the first fight. But if he does run, I’m better at cutting the ring off.”

In that first fight, Derbyshire dropped his hands several times and invited Frank to engage, but Tommy used his height and reach advantages to outbox him.

Frank banked the early rounds by landing long straight one-twos and then stepping away from Derbyshire’s swings that came back at him. Derbyshire had most of his successes when Frank took breathers or admired his work in the second half of the fight.

Frank is stylish and knows it, but Derbyshire is too proud to let an opponent stand in front of him and pose the way Frank did – and his rushing attacks brought him enough success to win three rounds on referee Steve Gray’s scorecard.

Derbyshire was still strong in the last round. He’s the type who’s always in the fight.

Frank remembered: “He was swinging them in. It was non-stop pressure. Glyn wanted me to box and not do anything stupid and that’s what I did. I frustrated him. I outboxed him.

Derbyshire has been stopped three times, but not for six years, when Burton super-bantamweight Leon Gower (2-0) put him down for the full count with body punches.

For his part, Derbyshire believes Frank will be surprised by the improvements he has made and says he could be underestimated, given Frank won fairly clearly the first time they boxed.

The rounds Derbyshire won that night were rounds that Frank virtually gave away by letting his work-rate and concentration dip. Derbyshire still struggled to pin Frank down and have sustained success, but that fight was five years ago and Craig has had the best wins of his career since.
Frank is still a very good fighter at this level and weight and the pick is for him to win on points.

The Verdict Despite the potential for a fairytale, Frank should win.