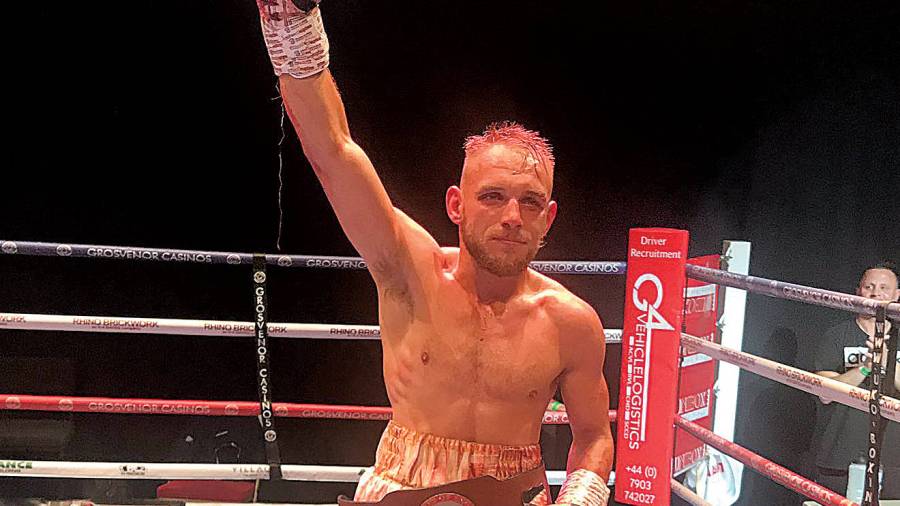 Craig Derbyshire is trying to go somewhere no journeyman has gone before, writes Matt Bozeat

NINE fights into his pro career, Craig Derbyshire wasn’t just waiting for his first win. He was waiting to land his first punch.

“I went straight into pro boxing from cage fighting and there’s a massive difference,” said the 30-year-old from Doncaster. “Boxing is all about your feet and getting into range. It took me 10 fights before I started hitting people! I couldn’t get my feet in the right place. I was always game and kept coming forward, but there’s no point being game if you can’t hit them!

“It would have been easy to get disheartened, but I worked on my feet and my head movement and I kept believing in myself.”

That self-belief and his work ethic have taken Derbyshire to a British title shot. He challenges flyweight boss Tommy Frank in Rotherham on Sunday April 3.

A rematch win over Joe Maphosa, in Houghton-le-Spring last September, secured Derbyshire’s shot at the British title. “People would have bet their house on Joe beating me,” said the married father of four. “But it’s not about how good your record looks, it’s about who you’ve fought.”

Derbyshire has fought Sunny Edwards, Charlie Edwards (twice) and many other champions and former amateur stars. The split points win over Maphosa was only his eighth in 39 fights (three draws). “People who aren’t in boxing will look at my record and say: ‘How can he be fighting for the British title?’ said Derbyshire, trained by Niall Almond and managed by Carl Greaves. “But if they watched my fights, they would say: ‘You didn’t lose that.’

“Not many have done it this way. I feel like I’ve done it the hard way, the right way. I’ve never been in the home corner and I’ve probably only had six fights at my weight, flyweight and super-flyweights. I’m a flyweight really, but I’ve fought up at 9st 4lbs.

“But I couldn’t be bothered selling tickets to knock out idiots.

“I was in the changing rooms once with this Lithuanian who was doing magic tricks. He was saying he was a magician, worked in IT and boxed because he liked travelling. He got knocked out in 30 seconds. What was the point of that? Anyone can get to 20-0 knocking out idiots. That’s not for me. I like a proper fight.

“I said at the start of my pro career: ‘Just get me fights.’ I knew I was up against it from the start because I didn’t have any amateur fights, but I had a lot of fighting experience.”

Too much for his school teachers. “I was kicked out of school at 14 for fighting,” said Derbyshire. “I was fighting sixth formers and after that, I went around town fighting. I thought I had better do something or I would end up in jail. I have had K1 fights, I’ve fought MMA and I’ve had stick fights. I started MMA at 19. I was a stand-up fighter and that’s why boxing appealed.

“I’ve been fighting for so long I never really thought about who I was fighting.”

Perhaps that’s just as well. Derbyshire never has turned up just to get paid. He’s way too proud and honest for that. Craig is paid to fight – and that’s what he does. “I haven’t got it in me to let them win,” he said. “I have thought about it, but once I get punched, you’re getting it. I like fighting.

“I didn’t really train for those early fights. I would go to the gym maybe twice a week and go for runs, but I was fighting every week and that was keeping me fit.

“I had seven fights in seven weeks once. It was about the money.”

This weekend it’s about getting his hands on the Lonsdale Belt. “I don’t think there’s ever been a journeyman who’s done what I’ve done,” said Derbyshire. “Other people would have given up, but I’ve shown that if you don’t give up, good things can happen.