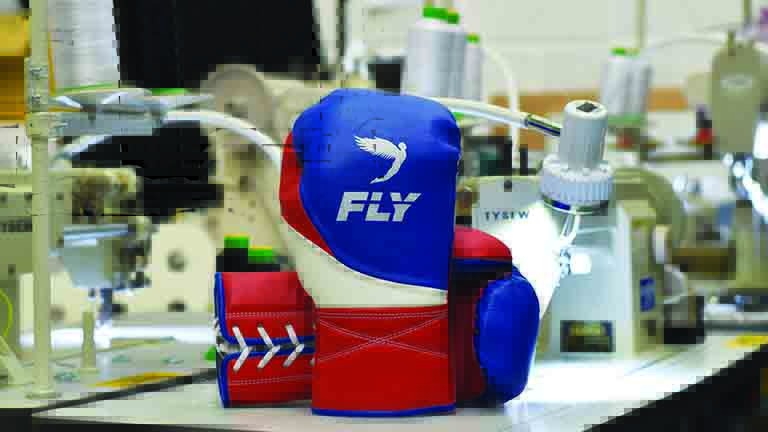 JOSH STEFFEN focuses intently on the job at hand. He doesn’t dare look up, or engage in eye-contact, because if he makes a mistake, he will throw what has already taken several hours to create straight into the bin. He ensures that the needle on the sewing machine is in exactly the right place before allowing it to plunge through the Italian leather, as he slowly crafts the boxing glove to be worn by Kell Brook in his training camp ahead of challenging the mighty Gennady Golovkin.

What makes the painstaking process all the more remarkable is that Steffen has only been using a sewing machine for 18 months, and at the age of just 25, his company Fly is the only manufacturer in the UK to make bespoke boxing gloves. Around his neck is a tape measure, a brown old school apron shields his white shirt from any mess, and atop his boyish face, his hair is parted immaculately. It’s an image that brings to mind craftsmen of the early 20th century – the watchmakers, the tailors, the shoemakers – before everything was churned out in faraway factories.

“I think that’s what we lack now, and it’s a great shame,” Steffen says. “A lot of the trades have just died off and all we get instead is just mass produced stuff where quality suffers. I have always preferred goods where pride has gone into their production, that have quality in mind ahead of quantity.”

That quality and attention to detail shows. Blessed and cursed with being an analytical perfectionist, it took Steffen “five or six months” of intense toil – not to mention cost – before he managed to make a wearable pair of gloves. It was another year before he produced a pair that were fit for competition. During that time he was taking apart the gloves of competitors (even finding that one high-end glove contained nappies as a major component), analysing the art and implications of punching, and developing an understanding of boxing gloves that few in the world can match. But hand-making the perfect glove – particularly one fit for the likes of Brook – is not a straightforward process.

“The hardest thing was going to bagmakers and shoemakers, who have been in the leather industry for years and years, and they would look at my plans [to make boxing gloves] and go, ‘No, it’s impossible’,” Josh recalls about the early stages. “I’d think, ‘But it can’t be!’ It is very, very hard. I had an employee who had been sewing leather for over 30 years, and after two or three weeks, she’d had enough, the process was too hard for her. It is, weirdly enough, a very, very physical process.”

Steffen demonstrates by turning the glove inside out, and illustrates the intricate details of creating even the tiniest section of his art. The point of the detail is to make the gloves as comfortable as possible – at least for the weapons inside them. Hand injuries generally occur because of the way they sit in the glove at the point of impact; Josh’s products minimise the risk by ensuring the clenched fist is as supported, and natural, as a clenched fist punching someone in the face can be. No other glove in the world, I’m told, can boast such attention to detail.

“I have made training gloves for people with hand injuries where they need a thicker grip bar, with damaged knuckles where they will need the grip bar to be thicker at one end and thinner on the other,” Steffen explains. “Other brands can’t do that because, by and large, they’re mass-produced. One way to look at it is to think of suits – you can get a bespoke suit from a tailor who will measure you, and they will create a suit that fits perfectly. A one-size-fits-all product or merely sending measurements via email to factories abroad is not the same as the personal tailored service we provide.”

It’s not only Brook who has taken a shine to these gloves. After being approved by the British Boxing Board of Control, Ryan Burnett recently wore them, and the world-class McDonnell twins have been seduced by their comfort (Gavin, in fact, will wear them when he fights on the Golovkin-Brook undercard). Not only that, Fly is starting to get attention all over the world.

“We’ve been overwhelmed with interest from places like the USA, Japan and UAE. They have a great appreciation for British craftsmanship and that is great to see. We always make them to the highest quality, always keep them British – you’ll never see my logo on something that wasn’t made in the UK.”

At over £300-a-pair, they’re not cheap. But made with the best material available, and lovingly built in a whopping 10 hours, Josh insists the cost represents value for money.

“When you look at the cost of our equipment you need to consider that we only use the finest materials, inside and out, and they are made by craftsmen in Great Britain,” he explains. “It is very skilled and not a rushed, churn-out-as-many-as-possible process like it is overseas. It’s a 10-hour – at least – meticulous process for one pair of gloves. We don’t pay [cheap] overseas wages either. Also, I’ve worked very closely with a lot of the higher end boxers, I’ve worked alongside Adam Booth who has a degree in anatomy and physiology, I’ve worked with fighters who were constantly getting hand injuries, I make sure the fist shape is right. We have tested the leather to make sure it holds its colour, to make sure it won’t crack. I can stand here all day and say they’re better quality components, which they are, but it’s more than that. The science of boxing, the science of the human hand, the science of throwing a punch has all been taken into deep consideration while creating these gloves.”

As a teenager, Steffen boxed and competed in Thailand in Muay Thai, only to suffer the agony of a shattered nerve when a punch split his tooth in half. That may have spelled the end of his time as a fighter, but his quest to make a difference in boxing is only just beginning.

“I change stuff all the time [on the gloves], just the tiniest little things, just to improve them. I was watching this documentary on this guy called Jiro [Ono] and he’s got this amazing sushi restaurant in Japan, it only seats 10 people, he’s 90 years old, still going, but he’s always changing little things just to make it better and better.
He’s already got three Michelin stars, and is renowned as the best in his field. But that’s what it’s about isn’t it? Once you are No. 1, you’ve got to keep going, and never stop striving for perfection. That’s what we’re doing here.”