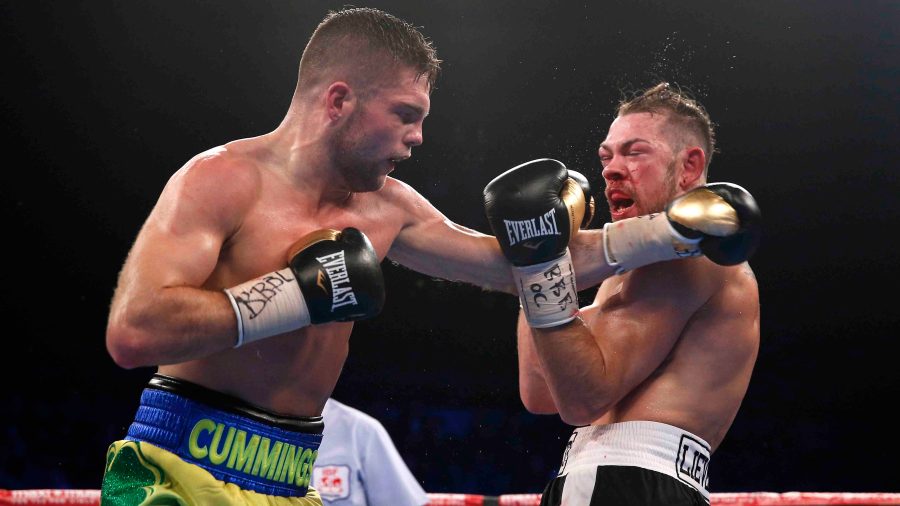 Conrad Cummings confident that he and stablemate Carl Frampton will be back better than ever, writes Lee Gormley

MIDDLEWEIGHT fighter Conrad Cummings will get the opportunity to avenge his loss to Ronny Mittag on March 11, as the Northern Irishman faces off with his German opponent in a rematch.

The 25-year-old has the chance to put things right at the Motorpoint Arena in Cardiff, with the IBF Intercontinental title on the line once again on Welsh soil.

Cummings was on the wrong end of a controversial split decision defeat to Mittag in November last year, with the judges scoring the bout in favour of the German at Wembley Arena.

It was the first setback of ‘Mr Dynamite’s’ three-year professional career so far, and the Cyclone Promotions representative is eager to rectify that previous result when he next enters the ring ropes.

Mittag’s face was left in a bloodied mess after the pair’s initial encounter in London, with the officials’ cards over the 10 rounds causing much surprise at ringside. Cummings looked to have done enough to prevail but only one judge sided with him at 96-94, while the other two handed the same tally to his foe.

Following his maiden defeat in the pro ranks, one which also saw esteemed coach Shane McGuigan also suffer his first ever defeat in the corner, Cummings only had eyes for a rematch next.

“It was the only fight I wanted, it’s next and I can’t wait to get my belt,” Cummings told Boxing News.

“I felt flat as a pancake when the scores were read out. Truly heartbroken.”

The IBF belt challenger will have a great platform on which to get one back over Mittag and showcase his talents again. Cardiff’s Motorpoint Arena could welcome plenty of home support for the Craigavon-born fighter, with Wales contesting Ireland in the Six Nations Rugby the night before at the nearby Principality Stadium.

As the chief support of the British cruiserweight title clash between Cardiff’s Craig Kennedy and Blackpool’s dangerous Matty Askin, Cummings is highly focused on bouncing back after reflecting on that earlier disappointment and knows exactly what he has to do this time around.

“At the time I was so down, I took a little while away from the gym,” he stated. “But now I am more focused than ever, I know what I want. I will do whatever it takes. I’m really buzzing for the rematch.

“It’s 12 rounds. I’ll be switched on from the first to last bell. I won the last time and had a lot more left in the tank. I know what I have to do and I will do it come fight night.”

Cummings is part of a talented Cyclone Promotions roster which boasts two-weight world champion Carl Frampton as its leading light, following his back-to-back classics with Leo Santa Cruz in the United States.

As well as Scottish prospect Josh Taylor and English featherweight Josh Pritchard, Cummings is relishing working closely with ‘the Jackal’ and being part of such a tightly-knitted team.

“He [Frampton] has been a massive inspiration to me and a massive help, in many ways,” he admitted. “He is the man! He gives you confidence that you can reach the same heights as he has, he is just one of the lads.”

Former featherweight champion Frampton now finds himself in the same scenario as his stablemate Cummings, as he looks to recover from his maiden career humbling at the hands of Santa Cruz in their Las Vegas rematch.

Cummings will no doubt face a confident opponent in Mittag, with the slick Brandenburg-born fighter having showed no signs of unwillingness to travel to the UK for a second time in six months to defend his title.

Cummings though is highly optimistic that both himself and recently dethroned WBA featherweight titlist Frampton will come back with a bang in 2017.

“We will both be back better than ever, mark my words,” declared a confident Cummings.