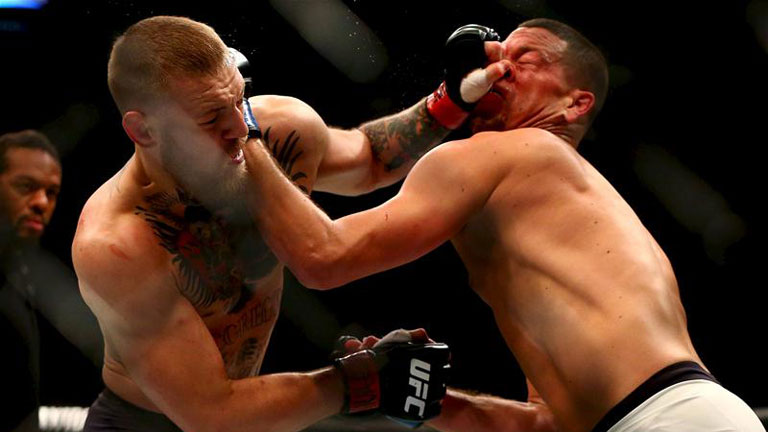 Declan Geraghty, who has sparred Conor McGregor, details how his fellow Irishman operates in the ring

CONOR McGREGOR has begun the training camp for his first ever professional boxing fight, but that does not mean the enigmatic Irishman has not sparred boxers in the past.

Particularly during the preparation for his UFC rematch with Nate Diaz last year, McGregor employed several Irish boxers to spar with him.

One such boxer is Irish featherweight Declan Geraghty, who has been involved in numerous McGregor camps and last sparred with Conor in the build-up to the Diaz rematch.

“We have sparred a number of times. I sparred him for the Diaz rematch, when the fight was announced I popped up and did a bit of sparring with him. That was the last time I sparred him,” Geraghty told Boxing News.

“It was just boxing. The sparring was serious. It was at a good, hard pace. I know what people are saying about the [Floyd Mayweather] fight, but I’ve seen what he can do and I’ve been in the ring with him. He has a unique skill, it’s very unorthodox and very unique. His distance is very good. He hits hard with both hands.”

McGregor, of course, fights Floyd Mayweather in an egregious mismatch in Las Vegas on August 26, with no boxing insiders tipping him to win.

Been lucky enough to share a ring with this man a couple of times and trust me your fucked he is so unique its fucking dangerous pic.twitter.com/kvnEy5qQdi

Geraghty understands the insurmountable task in front of his countryman but notes that McGregor has upset the odds several times in the UFC.

“He has the mentality and the will, he puts his head onto something and he believes it and he achieves it. He did it in the UFC, so he could do it in boxing as well.

“That’s what’s so good about boxing, one punch can change a fight and he does have power in the left hand and Mayweather does struggle with southpaws.”

While Mayweather may have had a bit of trouble with some southpaws, he always went on to beat them and the consensus is that the 49-0 veteran will outclass McGregor in the ring.

Declan – who fights for the vacant Celtic title next weekend – insists that McGregor will perform better than expected.

He said: “He hits very hard. I’ve done about 15 rounds in total with him. He’s tough and the fundamentals are there. Look, Mayweather is the best of his generation and I’m not saying Conor will 100 per cent win but people will be surprised.