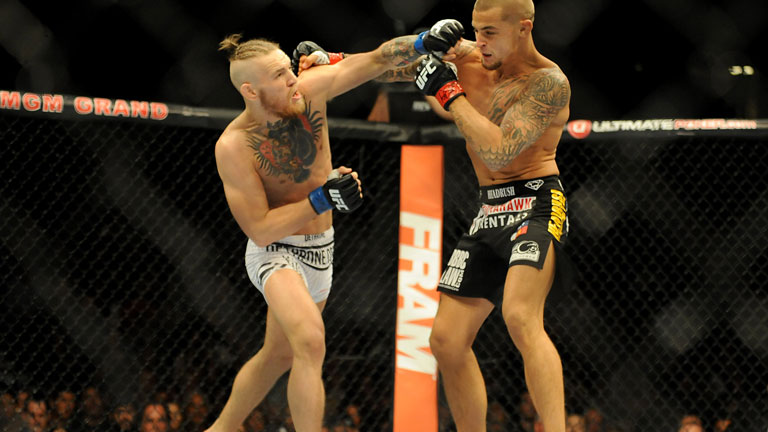 WHEN his left fist exploded off of the chin of Jose Also and the long reigning UFC featherweight champion crashed to the mat, it seemed that Irish MMA phenomenon Conor McGregor had reached the pinnacle of his career. How do you top a 13 second world title victory over a pound for pound great? Well for McGregor the world at featherweight is not enough and he has decided to move on to bigger (literally) and better things; an attempt to become the only fighter in UFC history to hold world titles in two weight divisions simultaneously.

It is common practice in both MMA and boxing for fighters to compete in divisions below their natural weight in an attempt to gain an advantage. In the UFC the situated is exacerbated when compared to boxing as there are less weight divisions, meaning the weight cuts required to make a lower division are greater but the advantages potentially greater. The belief is that shedding pounds to make a lower weight class provides the naturally bigger man with a size advantage; the oxymoron being that as pretty much all fighters do it there isn’t really an advantage at all!

What has become clear in the case of McGregor is that he really IS a big featherweight (see the size difference when he went head to head with Aldo) and as such moving up a division seems a logical and sensible move. However putting aside the fact that he will have to beat a very good fighter in Rafael dos Anjos, what challenges face the uber confident Irishman when stepping up in weight?

It is not simply a case of Conor not cutting as much weight and being able to eat more. In order to be as effective as possible in the higher division, he will still want to strip off excess fat but will then look to add muscle back on. This requires a slightly different approach with tweaks to the usual training regime. Although this will clearly be overseen by strength and conditioning experts, could any change, no matter how minor, unsettle McGregor’s routine?

Whilst the slight change of training regime mentioned above is unlikely to trouble an athlete as self assured as Conor McGregor, there are other pitfalls to stepping up in weight. When former boxing world champion Ricky Hatton fought as a light welterweight he, like McGregor, defeated a long reigning champion and pound for pounder. Hatton had always struggled to make the lighter division and a couple of bouts after winning the belt he decided to move up by 7 ponds (in McGregor’s case it will be as much as 10 pounds). In his first foray at a heavier weight, Hatton did win another world title but struggled so much that he came back down in weight again. Hatton would go on to lose two further contests later in his career in the heavier division, both by stoppage

What Ricky Hatton found was that the strength advantage he enjoyed in the lower weight division simply wasn’t there. He couldn’t bully opponents and power punches that used to halt people just seemed to bounce off advancing foes. Hatton never stopped an opponent at welterweight, having blown almost everyone away at light welter. In the case of McGregor, he has actually fought up at lightweight before but it was a while back and at a much lower level than the UFC. How will he react if his power strikes, that have led to an incredible run of stoppage wins in the UFC at featherweight, do not hurt his opponents in the same way at lightweight? What will he think if a world class bigger man takes his shots and then fires back with heavier blows?

In terms of McGregor’s technical game, he is primarily a stand up fighter and an aggressor. Being the bigger guy suits his style as it allows him to overwhelm opponents and ‘pop up’ from take downs (wrestling is one of his few weaker areas). Against elite fighters who are heavier and as big as or bigger than him, resisting take down attempts and getting up from them will prove harder. In turn, his cardio will need to be at absolute peak levels as the extra weight, both on himself and his opponents will prove draining.

I do believe that Conor McGregor has what it takes to be successful at the higher weight; his supreme confidence and self belief, aligned to his ability, should be enough to negate the potential issues highlighted above. As Conor McGregor seeks to make history in the UFC at lightweight; I sincerely hope that he isn’t made history at 155 pounds.