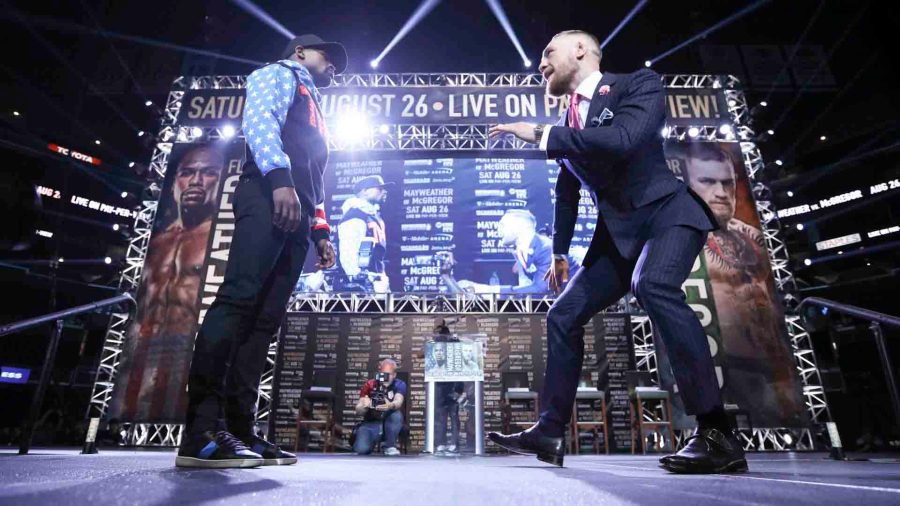 AT a grandiose press conference at the STAPLES Center in Los Angeles, the fight nobody thought would happen – Floyd Mayweather vs Conor McGregor – was pumped into the mainstream consciousness with both men promising a brutal knockout.

McGregor, the UFC lightweight champion, has never boxed as a professional while Mayweather has accrued a perfect 49-0 ledger, hundreds of millions of dollars and a coveted spot in the Hall of Fame when he eventually retires.

The enigmatic Irishman – dressed to the nines in a tailored suit, the pinstripes of which literally read ‘f*** you’ – took to the stage before his cue and lapped up the cheering crowd and the flashing cameras before Floyd joined him on stage. After some spiel from those behind the scenes, McGregor was passionately introduced by UFC President Dana White and wasted no time in goading Mayweather.

“He’s in a f****** tracksuit he can’t afford a suit any more,” he said, pointing at Floyd. “He is f***ed. His little legs, his little core, his little head. I’m going to knock him out inside four rounds mark my words.

“He will be unconscious inside four rounds, the movement, the power, the ferociousness [sic]. This isn’t a true fight. If this was a true fight it wouldn’t even take one round.”

“I’m a young, confident, happy man. I’ve worked extremely hard for this. I’m going to embrace everything. No one can do anything to me. I’m going to have a good time.”

Then came the turn of Mayweather, who has not boxed since his 2015 trouncing of Andre Berto, and some felt, due to the gulf in boxing class, he may try and big up McGregor’s chances in a bid to sell the fight.

“Line them up. I knock them out like bowling pins. August 26 I’m going to knock this b**** out too,” he said instead.

Clearly invigorated, he frequently engaged his fans in a ‘hard work, dedication’ chant and implored them to ‘point at the easy work [in this case, McGregor].’

“That’s right, I’m the IRS, and I’m about to tax your ass,” Mayweather jibed.

Mayweather would pause in between comments and prowl around the stage – he even began shadow-boxing at one point – a stark difference to the stoic figure he cut while promoting his blockbuster clash with Manny Pacquiao.

“We know Mr. Tap out likes to quit. I am guaranteeing you this. You are going out on your face or on your back. So which way do you want to go?” he asked his adversary.

It’s a level of trash talk Mayweather has not engaged in for years, though he did quickly shift the pace and congratulate all those involved for making the fight.

“It takes two warriors to bring an event like this together. The two biggest forces in combat sports made this happen,” he said.

“This was something that the fans wanted to see. I spoke to my team and said that the Mayweather-McGregor fight can be the biggest fight in history. That’s what we’re here to turn into reality.

“McGregor is a professional, stand-up fighter. The only loss he took was when he was on the ground. He’s a tough competitor and I’m taking him very seriously.

“Everyone knows I’ve been doing this for a long time. I’ve been here before. He’s a tough guy though and a warrior. The best must fight the best. The fans wanted this fight, me and McGregor wanted the fight. It’s going to be blood, sweat and tears on August 26.”