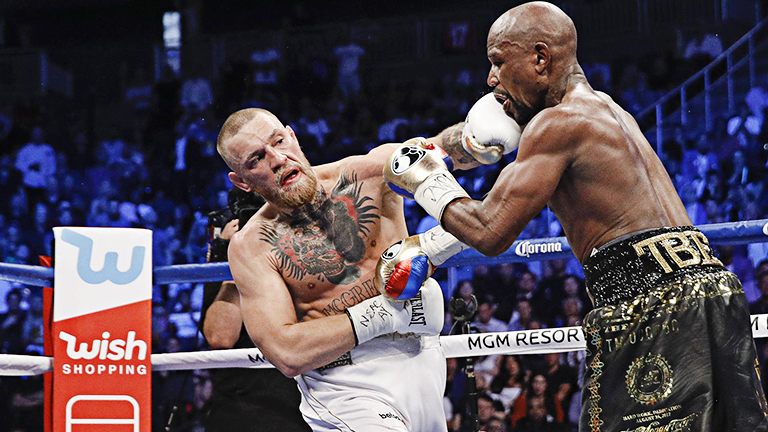 Conor McGregor is threatening to return to boxing again in 2020 for fights against either Manny Pacquiao or Floyd Mayweather. But how will he be welcomed?

BOXING, whether we like it or not, is fast becoming a playground for dreamers and those eager to play dress-up and perform on command for attention and gold coins. Something close to a travelling circus, its doors are always open, all manner of freaks are welcome, and the intrigue, even when we know the trick behind the magic, remains too great for anyone to look away.

In the last two years we have seen two fights – both involving just one recognised professional boxer – split the boxing world down the middle. They have caused some to worry about the sport’s future and others to claim it is brighter than it has been for some time.

The first of these, a 2017 mismatch between Floyd Mayweather and Conor McGregor, ended the way most expected – a tenth round stoppage win for Mayweather – but featured enough positive moments for McGregor, a UFC champion at featherweight and lightweight, for it to not appear as catastrophically one-sided as some had feared. This, as well as the sheer amount of money it generated, meant the gate was left open for others (and, gulp, a possible rematch).

The second fight of note, meanwhile, occurred last September between YouTube stars KSI and Logan Paul and was soundtracked by the hysterical squeals of YouTubers and Sky Sports commentators at ringside as purists around the world did a less than convincing job of pretending it wasn’t happening. It was won by KSI and a lot of people cared, apparently.

Neither fight told us much about McGregor or KSI as boxers, but what they did reveal was the direction in which boxing – or perhaps just this unruly branch of boxing – seems to be heading this year and beyond. Purists be gone, already we have heard about Conor McGregor’s plans to box again, either against Manny Pacquiao or Mayweather in a rematch, and on January 28 there will be second battle of YouTubers (Jake Paul, brother of Logan, and AnEsonGib), this time in Miami. More will no doubt follow.

Safe to say it’s only going to get uglier; uglier than before; uglier than ever. It could get so ugly, in fact, that purists will find themselves one day looking back on the era of Conor and KSI as a time when crossover boxing, celebrity boxing, clout boxing, was relatively pure and skilful and competitive and interesting. Maybe.

If not there yet, we should at least now be able to see the impact these two fights have made – for better or worse.

McGregor: Say what you like about McGregor and his dalliance with boxing in 2017 but at least he tried doing it against the best of the modern era and one of the best to ever do it. In sharing a ring with Floyd Mayweather, he showed he wasn’t looking for an easy route, and, what’s more, to last as long as he did with Mayweather is a victory in itself.

Then again, let’s not give McGregor too much credit for sacrificing himself for Floyd Mayweather. It was, after all, a shrewdly arranged business deal and without Floyd Mayweather the appeal of Conor McGregor donning bigger gloves and embarking on a pro boxing career would have been reduced significantly.

KSI: Despite the boasts of bulging former heavyweight champion Shannon Briggs, there is zero chance Logan Paul will ever become a boxing champion of any kind, nor is it likely we will even see him compete in a boxing ring again. We knew all this before his fight against KSI, of course, but if it wasn’t as clear as it should have been to his legion of fans, the six rounds he spent inside a Staples Center boxing ring would have removed any grey area.

Logan Paul is not a boxer. He trained to become one for one night only but that was as far as it was ever going to go. Thankfully.

This moment, as good as it would get for McGregor, was enough to have plenty of mixed martial arts advocates grow excited about their man’s chances in the fight and, moreover, have them believing the difference between Mayweather and McGregor, as boxers, wasn’t as great as the boxing nuts had led them to believe.

Other than that, though, McGregor’s success in the Mayweather bout could be boiled down to some fleeting awkwardness and unpredictability from his southpaw stance. In the opening rounds there were pushes and prods, never anything more telling than that, and he often got busy during times when Mayweather was looking to chill. This gave the impression of him doing well, perhaps even grabbing a foothold in the contest, but most knew it was, like the fight itself, all an illusion.

KSI: Game but sloppy, KSI chucked rudimentary right hands from his waist and often smothered his own work against Paul – the expected behaviour of someone who has only recently started boxing. He forgot all about the jab, seeing no need for it, to focus instead on trying to take Paul’s head off with every swing attempted. This led to sporadic success, just as it did in the pair’s earlier white-collar fight, before it ultimately led KSI into trouble – namely, a Paul uppercut which detonated on KSI’s chin and forced him to drop to the canvas.

KSI was given extra time to recover on account of the Paul follow-up being deemed illegal, but it was the way he rebounded that really meant something in a fight of very little meaning. To his credit, KSI didn’t look to hide or cower or seek an easy way out but instead sucked it up and took the fight to Paul, harder this time, showing the kind of spirit and determination he could easily have left at home. Had he done so, he still would have got paid and his reputation, in his world, would still have remained intact. But it was a mark of something that KSI and Paul both fought – in the only way they knew how – until the bitter end.

McGregor: The fight obviously ended in disappointment, and a tired McGregor being mocked by Mayweather and rescued by the referee, but that was to be expected. Besides, it could have been worse. It could have been a whole lot worse, in fact.

Beforehand, some believed McGregor would be found woefully out of his depth and stopped early, perhaps as early as the first round, while others suspected he wouldn’t be able to land a single punch on Mayweather, this man of genius defensive capabilities.

Yet, as it turned out, neither of these things happened. Whether by design or because Mayweather let him, McGregor did land punches, he did win rounds, and he was, if only for a few rounds, competing in some give-and-take action with a professional boxer boasting decades of experience to his name. We reckoned it wouldn’t last, and Mayweather, too, knew it wouldn’t last, but at least McGregor could admire his own good work for a few rounds and then take some sort of moral victory from an otherwise painful defeat.

KSI: Unlike McGregor, there is an edge here for KSI by virtue of the fact his record on Boxrec.com reads 1-0 and not 0-1. This means he is a prospect. It means he is undefeated. Choose to retire now and he will be remembered, like Floyd Mayweather, as a man who never lost a pro fight in a boxing ring. Or something like that.

The truth, however, is that KSI’s sole boxing win came against another fellow novice and debutant and will, in the grand scheme of things, be considered a victory of value only to those who follow him on social media. It was a win, yes, a meaningful one in his and Logan Paul’s world, but reveals to those with knowledge of situation only that KSI is a marginally better boxer than another person who makes their living from YouTube.

McGregor: Now back doing what he does best, and making a lot of money in the process, it’s hard to see why McGregor would be tempted to once again put on boxing gloves and do away with the kicks and inventive shoulder bumps he used to destroy Donald ‘Cowboy’ Cerrone this past weekend in Las Vegas.

That said, because McGregor’s two prime targets in the boxing world, Floyd Mayweather and Manny Pacquiao, are so gargantuan in their own right, the savvy Irishman understands there is an ungodly amount of money to be made from opposing either of the two under boxing rules. It’s for this reason a McGregor return to boxing can never be ruled out and does, at least from his point of view, make a lot of (business) sense.

KSI: In the aftermath of his win against Logan Paul, KSI was refreshingly honest in his appraisal and surprisingly endearing when he entertained – and laughed about – the possibility of again setting foot inside a ring and boxing. He didn’t fancy the idea of a rematch with Paul, nor the idea of fighting anyone else, which made the Staples Center fight seem very much the one-and-done experiment most presumed it to be, and allowed the more cynical and strait-laced among us to breathe a sigh of relief. It was, in many ways, the perfect ending – to the fight, to the night, to the charade.

The only shame is that he didn’t close the door behind him on his way out.