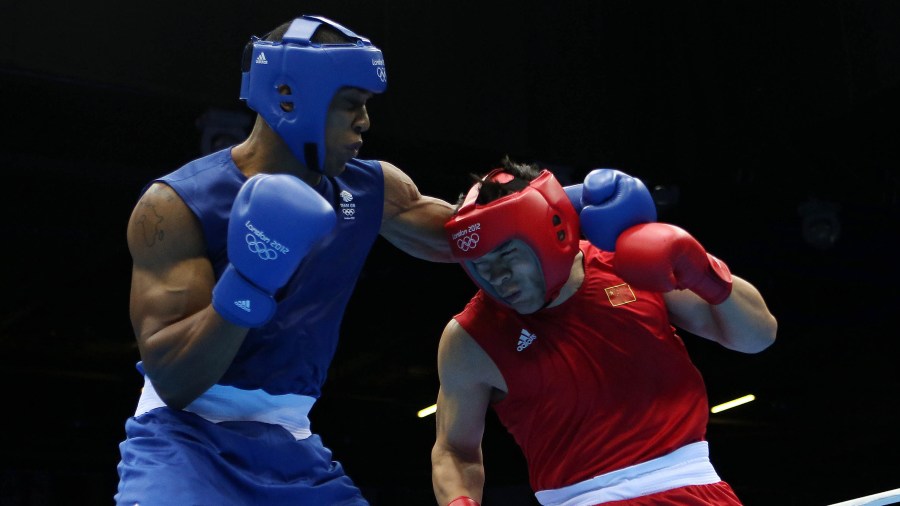 TWO former Olympic super-heavyweight gold medallists meet in London on April 29 2017 to see which of the two is the heavyweight world kingpin, either Wladimir Klitschko boxing for Ukraine or Watford’s Anthony Joshua. Klitschko triumphed in Atlanta in 1996, sixteen years later at London 2012, it was Joshua’s time. The WBA Super, IBF and vacant IBO heavyweight crowns will all be on the line at Wembley Stadium next spring.

Klitschko a vastly more experienced amateur than Joshua, made Olympic gold his own in Atlanta, boxing and winning four bouts to secure gold.

First up at the round 16 stage, he outscored Lawrence Clay-Bey from the USA 10-8, to move into the quarter-final, where he halted Sweden’s, Attila Levin of Sweden towards the end of the opening round. Earlier in 1996, Klitschko had outpointed Levin 7-0 in the European championships in Denmark, the man from the Ukraine going on to take silver, with Levin a bronze.

In Atlanta, Klitschko’s heavier artillery held sway, head shots unsteadied the Swede who tottering to a neutral corner turned his back on the man from the Ukraine, taking a “standing count”,  bloodied around the face and shaking his head he then made his way back to the safety of his corner, his Olympic exploits were over. Klitschko winning by a stoppage after 1 minute and 43 seconds of round one.

In the semi-final, Alexel Lezin from Russia was in the opposite corner to Klitschko and feeling quite confident having outpointed the Ukrainian 6-1 in their European Championship final, earlier that year. However, Klitschko “turned the tables” on the Russian winning on points 4-1 to secure his berth in the Olympic final to set up an interesting bout with giant Tongan, Paea Wolfgramm.

A 7-0 points verdict gave Klitschko the Olympic crown and an assured future in professional boxing. His phenomenal amateur ring record reads: 134 victories (65 inside the distance) and just 6 defeats, a 95.7% success rate. Some record eh, which spanned from the early 1990s to 1996! His first major international honour was a gold medal at the European Junior Championships in 1993, a long time ago now.

Anthony Joshua MBE, won his Olympic gold medal in London in 2012, with a far less impressive amateur record- spanning from 2007 to 2012 – but arguably he beat a much better class of opponent to win his gold medal than Wladimir Klitschko did. Please let me explain: Joshua also boxed four times to win gold, albeit on his “home turf” in London town. Some in the sport, but NOT this author, have said and hinted that this may have aided him, so far as winning the ultimate prize was concerned. Boxing of both codes, like most sports, is all about views and opinions, but suffice to say Joshua was judged to have won the Olympic title and there it must properly rest. We shall now see how he won it.

First up, he outpointed, Cuba’s Erislandy Savon 17-16, a very close call against a classy opponent – when has Cuba ever had an indifferent super-heavyweight? In his heavyweight days, Savon had won a gold at the World Youth Championships and a silver at the World championships, decent enough credentials. Next in the opposite corner was China’s silver medallist from Beijing, Zhang Zhilei, also the possessor of two World bronze medals. Joshua won 15-11 to line up a semi-final encounter with Kazakhstan’s fast rising star, Ivan Dychko. Joshua beat him 13-1. Dychko took a bronze in London and also had won a bronze at the World Championships. His first three bouts had all been close run affairs, but he was now in the Olympic final against “old foe” the Italian master craftsman, Roberto Cammarelle, the reigning Olympic champion, also with an Olympic bronze, with two gold medals at World amateur championships plus a bronze, and three silver medals in European championships, already in his locker. However, Joshua had beaten the Italian in 2011, by 15 points to 13 in the World Amateur championships, where the man from Watford, eventually won a silver medal which secured  him his place at London 2012. London and the whole of the UK held its breath, could he beat the legendary Italian once more? Yes he could, but it was a tight call with an element of controversy too, where would we be without that at the Olympics and in particular in the Olympic ring?

After a hard Olympic final both men had acquired 18 points each. A “count back” resulted in 56-53 in Joshua’s favour to the dismay of Cammarelle and his “team” who lodged an unsuccessful appeal against the jury’s decision.

Joshua left the amateur code with a record of 40 wins and 3 losses, providing him with a 93% success rate.  His interest in the sport developed in 2007 and he won his first of two domestic ABA crowns in 2010. His three losses came against Dillian Whyte (unan points), later avenged in a very tough fight in the paid ranks, a third round stoppage against Romania’s big punching, Mihai Nestor in the 2011 European Championships, where the Romanian won a bronze. Joshua took two “standing counts” in the third round from shots to the head; the stoppage might have been considered by some to be a little premature. His last loss was to Azerbaijan’s Magomedrasul Majidov, 22-21 in the final of the World Amateur Championships in Baku, Azerbaijan in 2011 … surely not a “home town” decision there? The Azerbaijan boxer won a bronze medal at London 2012.

So, there it is, the Olympic credentials of two former gold medallists, who will come out on top in London in the Spring, we all will have to wait and see. Bring it on!

Please note all records in this article refer to medals won at main major championships PRIOR to the Olympic Games in Atlanta in 1996 and in London in 2012 and NOT thereafter.