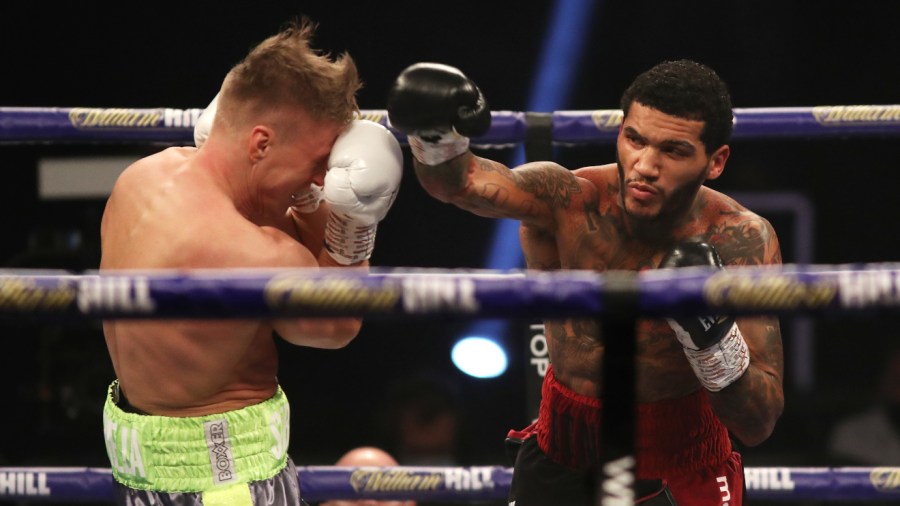 IN the biggest test of his career to date, rising welterweight Conor Benn, the son of British boxing legend Nigel Benn, faced off against Sebastian Formella at the SSE Arena in Wembley. The tough German, who went the 12-round distance with former two-time world champion Shawn Porter just three months ago, was expected to provide Benn with a stern assessment. Yet although Formella managed to last the full course again, he failed to put a dent in Benn and was thoroughly beaten.

In what was his first appearance in 13 months, Benn connected with a couple of fierce left hooks to the midsection in the opening minute of the bout. Jabbing well from range and letting uppercuts go when in close, the Ilford fighter looked sharp in round one.

After a relatively tepid showing in the opener, Formella began to let his hands go more in the second. Benn, however, continued to pierce through his foe’s guard with fast, hard jabs, leaving the visitor nursing a bloody nose.

Employing impressive upper-body movement and shooting out his lead hand from below his waist, Benn’s left caused Formella further problems in the third. The Hamburg resident clipped Benn with a counter, but was then forced to swallow a crunching uppercut as the session came to a close.

The jab and the uppercut remained Benn’s favourite punches in the fourth, though a strong straight right from the dominant Englishman was the best shot of the round.

In the fifth, Benn parried Formella’s blows with his gloves, and bobbed and weaved away from danger, while supplementing his smart defensive skills with eye-catching variety when on the front foot.

Benn stormed out of the blocks with mean intentions in the sixth, unloading hooks from both fists. But the spirited Formella stuck at it and crowded his rival, which prevented Benn from having the space to get his jab going again.

The following frame saw Benn get back to his boxing. Targeting the head and body, he rattled out twos and threes, as a frustrated Formella attempted to increase the pace.

Despite being marked up below the right eye, Formella, 33, battled on in round eight. Nevertheless, the more hurtful and varied strikes were still coming from Benn, who boxed with confidence and class in the ninth too. Switching his assaults both upstairs and down, an array of clean, heavy shots thumped into the game but outgunned Formella.

Determined to finish with a flourish, Benn was in command once more in the 10th and final round, as he capped off a mature and encouraging display against a solid opponent.

Speaking after the contest, Benn called out his fellow unbeaten Brit and Matchroom stablemate, Josh Kelly. “It’s the only fight I want,” the triumphant 24-year-old said. “I’m here for business. Every time I fight I get better. I’ve got loads of gears left. I’m not gonna blow everyone out. I wear them down, as I did tonight. I’ve had harder spars than that.”

On the undercard, Ipswich’s Fabio Wardley notched his ninth successive early victory. The composed heavyweight prospect was up against a previous Daniel Dubois and Nathan Gorman victim in Ghana’s Richard Lartey. The Accra man came to fight but had no answer for Wardley’s power.

Happy to jab off the back foot in round one, Wardley unleashed a clattering left hook-right hook combination in the second that sent Lartey crashing to the canvas. Referee Loughlin waved the bout off without a count at 1-22. It had been set for 10.

Davies enjoyed success with right hands down the middle to leave Cairns sporting a welt by his right eye at the end of the first. The southpaw Scouser landed a few lefts in the next round, but Davies’ accuracy was still superior.

One-twos hit the target from Davies in the third, along with jabs and long rights in the fourth. Exhibiting fine footwork, the fluid Davies mixed his attacks up effectively and bloodied Cairns’ nose in round five.

After shipping further punishment in the sixth, the gritty Cairns was wisely pulled out by his corner ahead of the seventh. Referee John-Lewis accepted the retirement.

Bald and bearded heavyweights Alen Babic (Zagreb, Croatia) and Tom Little (Hatfield) engaged in a full-throttle scrap, slated for eight. Little tried to keep his brutish adversary at bay by sidestepping, jabbing and working the body in the first round. But the crude Babic relentlessly marched forward, slugging away with vicious hooks.

With Little moving less in the second, the tenacious Babic hurled yet more hooks his way, though some missed wildly. A bludgeoning five-punch salvo in round three bundled Little to the mat. He rose to his feet with blood trickling from his nose, before a sustained burst of clubbing clouts caused him to slump down and out of the fight. Referee Williams stopped it at 2-38.

Little, who has fought in good company, has now suffered five stoppages in a row, while Babic has yet to be extended beyond three rounds.

The super-middleweight six-rounder between Harrow Weald’s Jez Smith and Bury’s previously undefeated Ben Ridings went the way of Smith, who was a shutout 60-54 victor for referee Williams.

THE VERDICT Benn’s development seems to be coming along nicely.