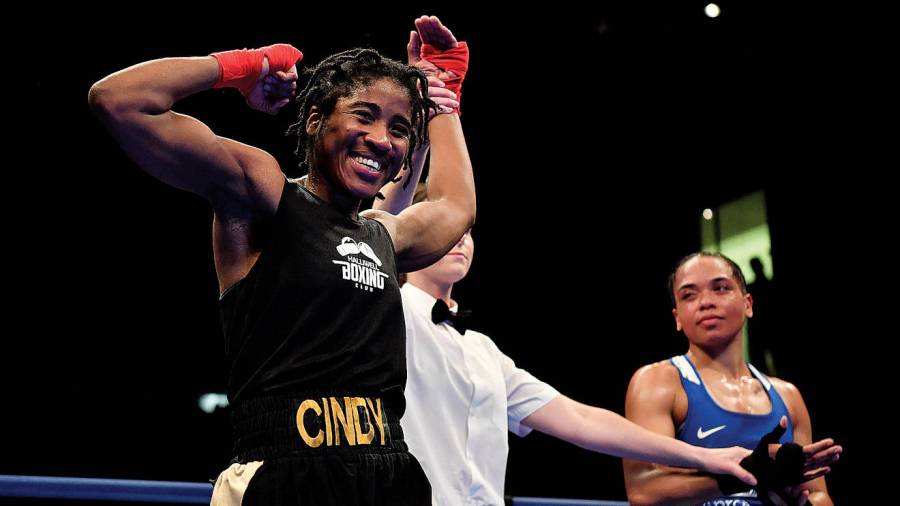 Cindy Ngamba is fighting for even more than medals, writes John Dennen

WINNING a medal at the World championships is important in itself. But for Cindy Ngamba it would have even more significance. She is in Istanbul at the World championships with the Fair Chance refugee team, supported and funded by IBA, the international governing body. She is hoping that securing a medal will help her case when it comes to resolving her citizenship status and ultimately boxing for Britain.

She trains on the GB programme and has been earmarked for the 2024 Olympic Games, if she can get her passport in time. “GB Boxing are in the process of trying to sort out my paperwork, they’re trying to find which direction is best to take that will not have any risks. They have managed to find two directions but then it’s to do with having to speak to a lawyer and seeing which out of the two. For the moment they’re bringing me down to train and get some sparring. I’ve got an opportunity to go to the Worlds with Fair Chance and IBA, which I’m grateful for. Still in the process of sorting it out. I don’t know how long it’s going to take,” Ngamba explained. “At the moment they [GB] are saying they want me for the 2024 Paris Olympics at 70kgs but it’s to do with how long it will take to sort out my papers. Me going to the Worlds and winning the gold will give them more opportunity to bring it forward or the Home Office will say okay, she went abroad, did not compete for us but she still won a gold medal, you know.”

In short she is determined to be victorious. “There’s no other way; I have to win,” Cindy stated. “It is what it is. I’ve trained hard for it. I want it. I always think if you want something then why would you feel pressure. I don’t feel pressure. I’ve trained hard for it, I knew this was coming and I’m ready for anything that comes for me. And I have my coaches with me, they’re there for me and support me and I believe in myself. Once I believe in myself I know I can do anything.”

Ngamba came from Cameroon, brought by her father to Bolton when she was just a child. She’s grown up in Britain. “I came to the UK when I was 11 years old, I’m 23 now,” she said. “In my country it’s illegal to be gay, so that’s how I managed to get the refugee status.”

“I see where they [the Home Office] are coming from to be honest, but at the same time I think they’re being too harsh, if you ask me,” she continued. “I got a letter from GB Boxing, I got a letter from England Boxing, still that did not work, to the point where I had to use something that was in the lawbook which is in my country. In the law in my country, you get killed, you get beaten up, you can get put in prison if you’re gay, so that’s why they allowed me to stay.”

“I’ve been coming here on GB ever since 2019 so I’ve seen Omarah, sparred her many, many times and I know how she moves, what she does and what she throws and what’s her weakness and what’s her strength. So I wasn’t really stressed about it really. Also I listened to my coach who watched her videos from before and then we just tried to analyse the things that she does, the bad habits and the good things that she does. I just knew that I had to use my speed and strength, just try to outbox her not just try to knock her out,” Ngamba said. “The hype for it, Jesus Christ! I watched the videos on BBC iPlayer, flipping hell the amount of people that were screaming… It was crazy, it was a good night, a memorable night for sure.”