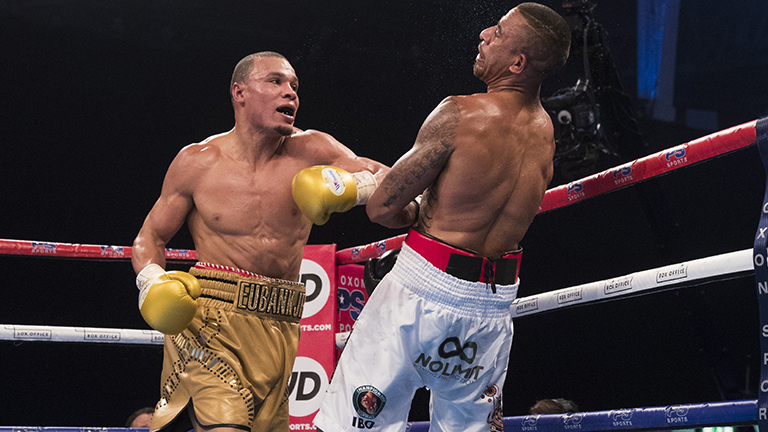 'We’ve got ITV and I’m the most exciting fighter in Britain,' says Chris Eubank Jr

“Eight months out of the ring so there was a bit of rust there but we got the job done. The guy was extremely tough. He didn’t come over here to give the belt up easily,” Eubank said. “This is my ticket to the big time.”

He was neutral as to whether he’d prefer to box at 160 or 168lbs. “It’s whoever steps up first,” he said. “I genuinely don’t have a preference, there’s so many great fights to be made in both divisions, I’m just willing to go with whatever comes my way first.”

But his father, Chris Eubank Snr, saying that Junior could fight as soon as April, added, “We are choosing James DeGale… If we can make this fight with James DeGale, that we shall do.

“We’ve been marinating him.”

“That’s a fight the public want to see,” Junior continued. “I know [Billy Joe] Saunders is starving at the moment as well. No fans. Fighting in Leisure centres in front of 300 people. He needs to fight and we all want that fight. Me more than anybody.”

Gennady Golovkin remains a topic of conversation though negotiations to make that fight fell through last year. Eubank Snr maintained, “We got swindled out of that fight.” Then promoter Eddie Hearn has previously said Eubank simply missed the deadline he needed to sign.

The Eubanks also reacted to Frank Warren’s BoxNation television channel deciding to broadcast their old fights to clash with Eubank-Quinlan on ITV Box Office. “They’re scared, they’re worried. We’re the new kids on the block. They don’t want us, they don’t want anybody taking a piece of their pie and now we’ve got a behemoth in ITV behind us,” Eubank Jnr said. “It was a desperate cry for help.

“We’ve got ITV and I’m the most exciting fighter in Britain.”