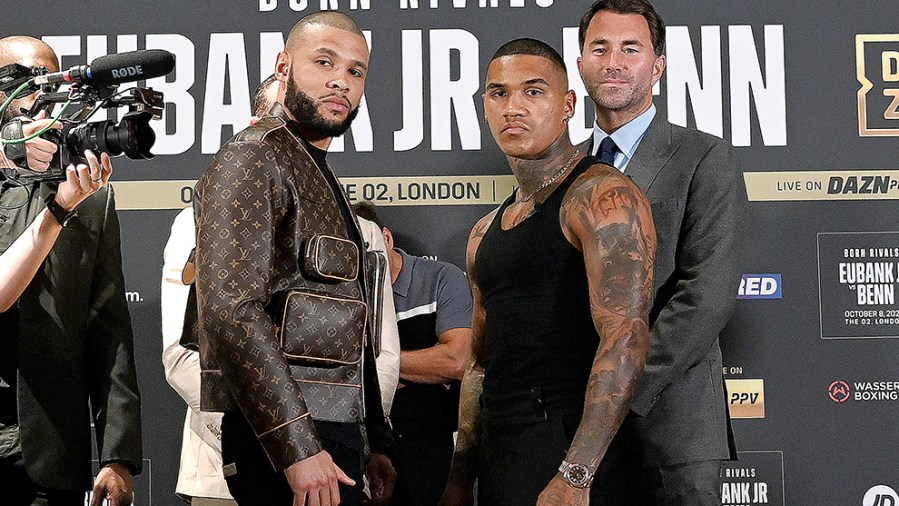 THE British Boxing Board of Control (BBB of C) have prohibited Saturday’s contest between Chris Eubank Jnr and Conor Benn from taking place after Benn tested positive for banned substance clomifene. The fight’s promoters, Matchroom Boxing and Wasserman Boxing, are contesting that ruling and still hope to stage the bout at the O2 Arena on Saturday night.

Trace elements of the substance were discovered by the Voluntary Anti-Doping Association (VADA) following a test that Boxing News understands took place in September. VADA were employed, on the instruction of both camps, to carry out additional testing to that of the United Kingdom Anti-Doping (UKAD), the official anti-doping agency recognised by the British Boxing Board of Control. All UKAD tests came back negative, including those carried out after VADA’s adverse finding.

Thus far, only the findings of VADA’s A-sample have been released. The B-sample has yet to be tested so any rule violation is yet to be confirmed. It is exceptionally rare that B-samples are any different to the A-sample because, simply, it is the same sample that has been split into two parts.

Clomifene is a selective estrogen receptor modulator most commonly used in female fertility treatments. According to the United States Ant-Doping Agency (USADA) the substance can alter testosterone levels in both male and female athletes and has also been used as a masking agent. It is on the World Anti-Doping Agency (WADA) Prohibited List and it also appears on UKAD’s Prohibited At All Times (in and out of competition list).

According to WADA, “Clomifene has also appeared as an undeclared ingredient in black market products sold on the internet for performance-enhancing use.”

Boxing News understands the results of the adverse test were shared by VADA to the relevant parties on September 23. The Daily Mail, courtesy of Riath Al-Samarrai, broke the story on Wednesday morning (October 5). The Board, Eddie Hearn (Matchroom Boxing) and Kalle Sauerland (Wasserman Boxing) were spoken to about the Mail’s findings on Tuesday.

At 2.06pm on Wednesday, the BBB of C, released the following statement: “On the evening of October 4, the Board of the British Boxing Board of Control Limited resolved that the contest between Chris Eubank Jnr and Conor Benn scheduled to take place on October 8 is prohibited as it is not in the interests of boxing. That was communicated to the boxers and the promoters involved on the morning of October 5.”

Before that statement was released, but after the BBB of C had informed them that the fight was prohibited, both Matchroom Boxing and Wasserman Boxing indicated that the fight would go ahead.

At 12.45pm, Sauerland told TalkSport that it is the wish of the boxers that the fight still goes ahead after the pair had engaged in a “personal discussion”. When pressed, Sauerland confirmed that “the fight is still on.”

While Sauerland was on air, Matchroom released a statement.

“We have been made aware that a random anti-doping test for Conor Benn conducted by the Voluntary Anti-Doping Association returned an adverse analytical finding for trace amounts of a fertility drug,” the statement read. “The B sample has yet to be tested, meaning that no rule violation has been confirmed. Indeed, Mr Benn has not been charged with any rule violation, he is not suspended, and he remains free to fight.”

Reacting to the Board’s statement, while at the public workouts for Saturday’s event, Eddie Hearn said: “The UKAD testing, which is the testing that the British Boxing Board of Control use, and are governed by, have all been clear and negative, there was an adverse finding on a VADA test previously. There has not been an official doping violation.

“There is a process that has to be gone through. Conor Benn is not suspended, ultimately he can’t be because he’s passed all the tests from UKAD, but clearly the Boxing Board of Control will take a position on it. We’ll deal with the lawyers on it. Both camps have been made aware, previously to the article coming out about the situation and both camps are prepared to progress with the fight. But ultimately conversations have to be had with the lawyers, and the teams and the British Boxing Board of Control.”

Why VADA were employed to carry out tests, if the results are to ultimately be ignored, was not discussed.

After his workout, Benn said: “I’ve not committed any violations. I’ve not been suspended. So, as far as I’m concerned, the fight is still going ahead. I’ve spoke to Chris [Eubank Jr] personally and we both want the fight to go ahead. We’ve both taken medical and legal advice and, as I said, we want the fight to happen for the fans.”

Eubank Jr denied there had been a phonecall when he was interviewed. It’s clear he is keen for the fight to go ahead, however. “It’s a shame, but the promoters, the Board, they’re going to sort it out. I’m ready, I’m clean, I’m 60 per cent… Of course there’s concerns [about the failed test] but, again, I‘m ready. I’ve cut the weight and I’m ready to go. This is all unfolding. All I’ve got to do is make sure I’m ready to go.”

Before today’s developments, Chris Eubank Sr had repeatedly stated he does not want the fight to take place due to the catchweight (157lbs), and the rehydration clause that stipulates neither fighter can weigh more than 10lbs over the catchweight at another weigh-in, scheduled to take place at 11am on the day of the contest.

Upon hearing news of Benn’s test, Senior told Boxing News: “What we can’t do, and what the British Boxing Board of Control can’t do, is allow something to happen that will bring the sport into disrepute.”