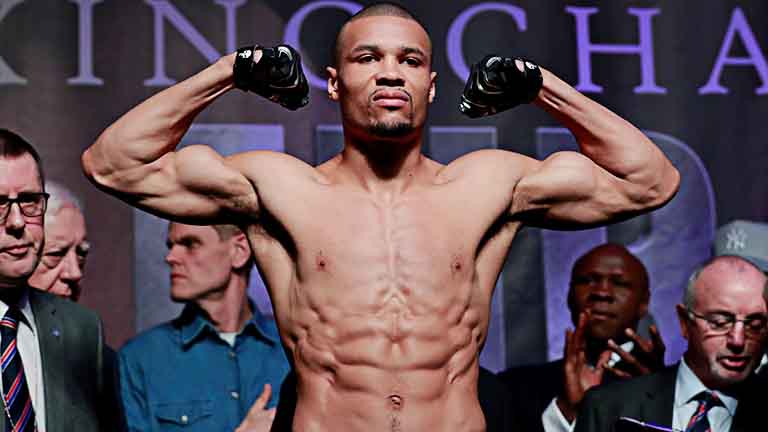 JAMES DEGALE has questioned the wisdom of Chris Eubank Jr hiring a new trainer to prepare him for Saturday’s grudge match at The O2 Arena.

The rival super-middleweights finally fight in London after years of ill-feeling between them, and the 29-year-old Eubank Jnr does so for the first time since recruiting the little-known Nate Vasquez.

DeGale has long proven himself the superior technician of the two fighters but at 33, towards the end of a tough career and after multiple injuries, is showing signs of a physical decline, providing his opponent with a potential advantage.

Eubank Jnr’s technical deficiencies 12 months ago contributed to a one-sided defeat by George Groves, ones he has sought to address by working with Vasquez, of the Mayweather Boxing Club.

DeGale believes that even if he proves willing to listen their relationship will not succeed.

If the younger fighter overlooks his physicality to attempt to out-box an Olympic gold medallist he is almost certain to fail, and DeGale says that with the conviction of a fighter who has remained loyal to Jim McDonnell, despite significant pressure for him to make a change.

“Is Eubank going to listen to his coach? Is he going to improve? He is what he is; he’ll fight the way he wants to fight,” he told Press Association Sport after weighing in at 166lbs, two pounds below the super-middleweight limit.

“After he’s done a couple of rounds he’ll just revert to the old Chris. You’ve just got to keep it basic with Eubank; a jab, a right hand, and use your feet a little bit. It’s the basics of boxing he struggles with.

“He’s been with him for the past six months, but Eubank ain’t going to listen. He’s going to get schooled, and that’s all you need to know.

“Me and Jim, he’s been there and done it, and our relationship’s been going for 10 years. He’s more than a coach. He’s my mentor, my motivator; he’s taught me a lot through the years and we’ve just got a fantastic bond. You can’t beat that.

“You can’t recreate that in one training camp. Getting a new trainer isn’t going to help him.

“If I did lose where else would I go? When he loses he’s in trouble.”

It was while training in Las Vegas that Eubank Jnr met Vasquez, and a year on from that damaging, high-profile defeat by Groves he insists it is his trainer’s influence that has given him further confidence he will end DeGale’s career.

“We’ve spent a lot of time together. Strategy, game plan, and boxing smarts (will be introduced),” said Eubank Jr, the surprisingly heavier fighter by 1lb.

“I’m not going in there and just winning off of pure heart and hustle. I’m going to be smart with my attacking, and defence. It’s going to be a masterclass.

“A lot of trainers, or these guys hanging around gyms, don’t really know what they’re doing. They may pretend or say they do, but they’re just hyping. I could see that Nate was the real deal.”