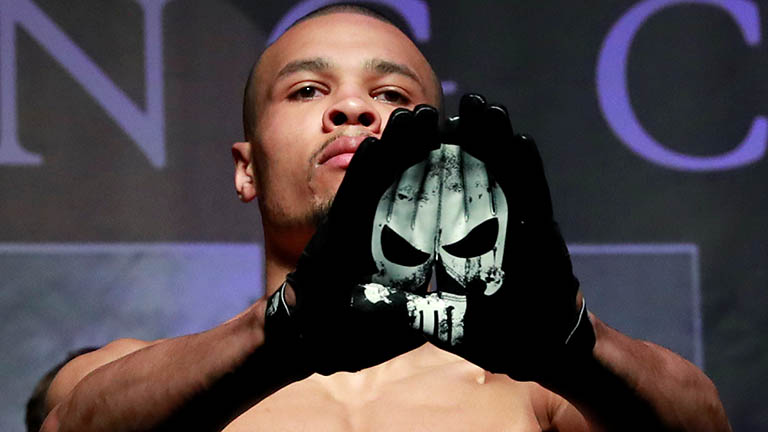 Meanwhile James DeGale looks to an old rival for inspiration on how to beat Chris Eubank Jr, writes John Dennen

CHRIS EUBANK SNR made an extraordinary public intervention during James DeGale and Chris Eubank Jr’s pre-fight press conference this week. Normally Senior is Junior’s most influential cheerleader. On this occasion Eubank Jr had to sit stony-faced as his father confessed that he saw his son’s contest with DeGale as a 50-50 fight and was ‘petrified’ when it came to the result.

“He said spiritually maybe James has a slight edge,” Eubank Jr said. “James is the one talking about retirement. Maybe that is fuelling him because he knows that this is it if he loses. This is not it for me, regardless of the outcome. People are talking about retirement but it hasn’t come into my mind. I can’t even comment on that type of thing. I can only go in there and believe, which is what I do. I’m very self confident and now we have a proper corner and team around me to help me. I’m very confident.

“I wouldn’t say he [Senior] is doubting me. He says it’s a 50-50 fight, I don’t believe it’s a 50-50 fight. You have to speak to him about that, I don’t know what he means exactly by the things he says. I have to do what I’ve been trained to do. He hasn’t been in the country for the last three months so he hasn’t seen the work I’ve been doing. Maybe that is where his confidence is lacking because he doesn’t know what I’m going to do, but I know what I’m going to do. That’s enough.”

“He is not talking about my fighting spirit that’s for sure,” Junior insisted. “He knows I have the warrior spirit. You can’t do what I have in the sport without having a warrior spirit.”

“The fire is always there, it’s always been there. Other people’s opinions on me and how I’m going to perform, I’ve never really noticed,” Eubank continued. “Positive or negative I don’t let it affect me. I don’t let it affect my mind set or emotion. Words don’t mean anything. All that matters is the work you put in, that is what holds the weight.”

Eubank did predict that he would stop DeGale inside the distance. “I do. I don’t think it’s going to go 12 rounds. Sometimes you get predictions wrong. Most of my predictions in my past 29 fights have been right. When I say I’m going to stop him, that’s what I believe,” Eubank said.

DeGale in contrast was not only adamant that he will finish this fight the victor but did not give to much credence to Eubank Sr’s intervention. “They’re playing mind games; they’re idiots. Let me tell you how this fight is going to go; it will be cagey for the first four or five rounds and then he’s going to get desperate. He’s going to know he’s down and he’s going to come. I will have some shaky moments in this fight but I will win and we will see the levels in this fight,” DeGale said. “He knows what’s going to happen, he might be confident in his ability but doubt does come into his mind. When I say about this being a retirement fight it puts him under all sorts of pressure.”

In a further surprise DeGale will take inspiration from the bitterest rival of his own career. George Groves beat Eubank a year ago in a high profile contest and DeGale considers that the template. “If you’re not switched on for 12 rounds [Eubank] is a difficult fight; let’s not write him off totally. He can be outboxed but he is as game as f***. All I do is watch him fight George Groves and I watch his feet and the jab, I’ve got to keep it simple and hurt him early on and let him feel it,” DeGale reflected. “I’ve watched it a couple of times, I’ll watch it again tonight just to get it in my head.”