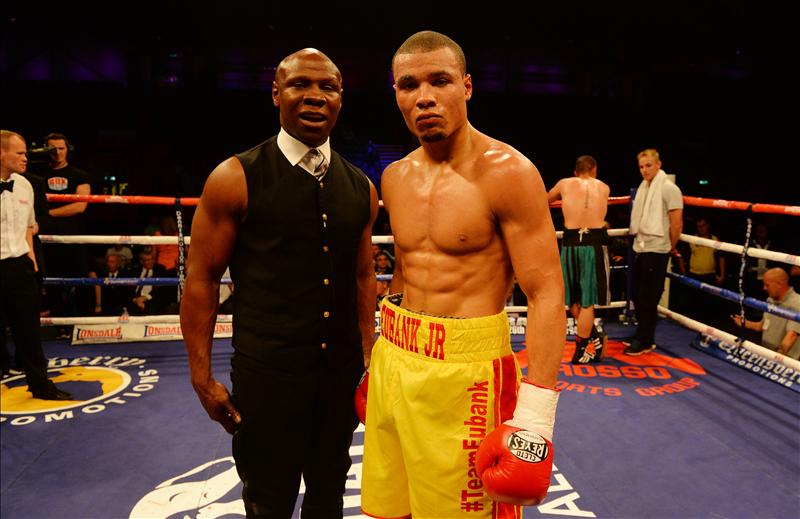 Perhaps more importantly, it was also confirmed that Hearn is already in talks with Gennady Golovkin’s promotional team about setting up a fight between the two at the end of the year.

That move from Hearn was made under strict instructions from Eubank Jr and his father, both of whom are hell-bent on luring the Kazakh menace into a British ring this year. Jr has made it quite clear that the man he wants is Golovkin.

The news comes straight off the back of Canelo Alvarez’s announcement that he vacated the WBC middleweight title in defiance of the sanctioning body’s ‘artificial’ deadline for a deal to be struck between the flame-haired Mexican and mandatory challenger Golovkin.

‘GGG’ immediately inherited the WBC strap, adding it to the WBA and IBF trinkets he won inside the ring. Alvarez, and his team, have made it fairly clear they are not so keen on Golovkin at the moment.

“It says a lot about the guy’s character. He has an opportunity to prove himself and he didn’t want to step up,” Eubank Jr said to Boxing News about Canelo dropping his title.

“The excuses about him being too light, not being big enough, it’s rubbish because he’s cutting so much weight before these fights. He is a natural middleweight, he walks around at super-middleweight I think. There’s no excuse.”

Canelo has spent the past few years fighting at a 155lb catchweight, while Golovkin is a fully-fledged 160lb wrecking ball who currently holds the highest knockout percentage in middleweight championship history – a fearsome 91 per cent.

Canelo – whose rockstar status in Mexico might take a hit after this latest development – rehydrates to well over 170lbs come fight night, and by all accounts looks more than capable of fighting at the 160 limit.

After he pole-axed Amir Khan in six rounds earlier this month, Canelo for the first time stated he would fight Golovkin at 160lbs, clearing that potential hurdle.

Eubank, the current British middleweight champion, has told Hearn to secure two defences of his title, and then set up a pay-per-view fight with Golovkin.

“We’ve got a couple of fights now, but I hope this goes on for a long time,” Hearn told Boxing News.

“I can’t ignore the instructions. The instructions are: we want two fights, and then a pay-per-view fight, and we want it to be Golovkin, go and sign that now.

“I’ve been talking to [Golovkin’s promoter] Tom Loeffler a lot over the past few days, it’s a big fight. I said to him, ‘you’ve got a lot of people saying they want to fight you, but here’s one who will and he will sign today.’ They’re interested in any fight that is credible and makes money. They know this makes money in the UK, on pay-per-view, a huge gate, it’s sellable. It’s a huge fight. I don’t think it’s pay-per-view in America, so it’s pay-per-view here therefore the only model that works is to bring him [Golovkin] over here.”

Eubank is doing something Canelo apparently will not – he is forcing his promotional team to actively make a fight with Golovkin, and he is prepared to sign on the dotted line now. Hearn admitted that were he in full control, he would not be aiming for a fight with Golovkin this year.

Indeed that does highlight a slight difference in the positions of Canelo and Eubank. While Alvarez has served under the Golden Boy Promotions banner for most of his career, Eubank Jr enjoys more autonomy and has walked out on a Matchroom contract in the past. But his reunion with Hearn has a clear aim – a fight with ‘GGG’.

There’s no doubt Canelo wants to fight Golovkin. He comes from a proud fighting country and has shown no fear of challenges in the past, taking on the likes of Floyd Mayweather, Miguel Cotto and Erislandy Lara. However he is Golden Boy’s cash cow and they don’t seem to want to throw him in with a man who has bludgeoned, flattened and mauled his way into the limelight quite yet.

Golovkin has been waiting for his deserved marquee fight for a while, swatting aside the likes of Dominic Wade. But his patience, along with that of the fans, has run out. The two sides each agreed to an interim bout, Golovkin battered Wade and Canelo crushed Khan. Now, Gennady’s side are demanding the fight happen in September, when Canelo is next slated to be out.

All signs point towards there being further delays. Canelo canning the WBC’s belt means there is no deadline on negotiations, and Canelo-Golovkin is quickly becoming a sickening sequel to the Mayweather-Manny Pacquiao fiasco.

But Eubank has made his feelings clear, he wants to share a ring with one of the most dangerous fighters on the planet. He makes the first defence of his British title against Tom Doran on June 25, though has already mapped out his route to ‘GGG’.

Conversely, Canelo would barely mention Golovkin’s name before his fight with Khan.

His trainer, Ronnie Davies, fully agrees and while he knows little of Doran, he has seen plenty of Golovkin and remains convinced his charge is the only fighter in the world with a style which could beat the middleweight king.

While Golovkin has looked imperious every time he’s stepped through the strands, he has not yet fought a top-drawer foe. Eubank feels those who have wilted under Gennady’s mitts had lost before they’d even entered the ring.

“We have to trust in Eddie and leave the negotiations side of it to him. As far as will he take the fight, who knows? Financially it would be a great opportunity for him, so I don’t see why he wouldn’t.”

Eubank Snr doesn’t think Team Golovkin will take the fight, and he warned them against it. Hearn is aware that Golovkin has other options besides Eubank, the most prominent obviously being Canelo, as those negotiations are still ongoing.

Former Eubank conqueror Billy Joe Saunders holds the only other middleweight title Golovkin doesn’t own, the WBO strap, and has said he would fight ‘GGG’ this summer. If the Canelo fight falls through for this year, Saunders and Eubank could be the most attractive options for him. Saunders offers the final piece of the 160lb championship puzzle while a fight with Eubank generates serious pay-per-view revenue in the UK.

However the WBA have said they will order him to fight Danny Jacobs should it become clear he can’t face Canelo, which could scupper the Brits’ plans. Hearn has also conceded that the remaining Sky Sports Box Office dates for this year are taken up by Kell Brook at the end of August and Anthony Joshua in another fight toward the end of the year.

Regardless, Eubank should be commended for being so upfront about his intentions to take on Golovkin, who is seen by many as the best fighter in the division. Admittedly, Eubank has far less to lose than Canelo at this stage – and Gennady would be a colossal step up in class for him – but he is still making a genuine effort to try and prove himself against the elite. Alvarez should do the same.