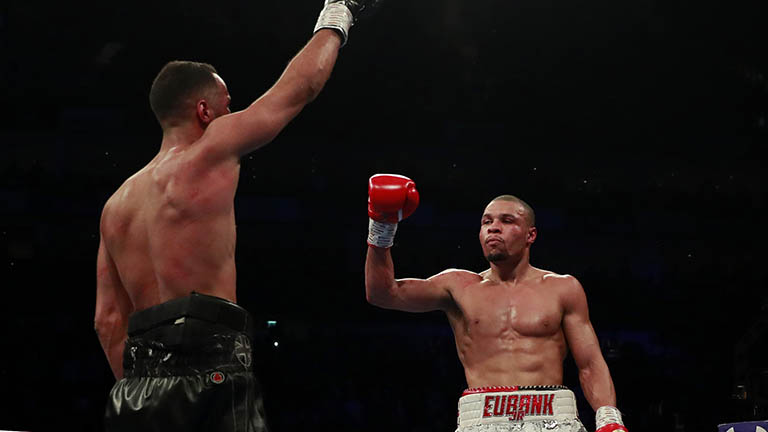 'This was a career-defining fight for me, this was make or break, do or die,' says Chris Eubank Jr

CHRIS EUBANK JR is to explore returning to middleweight after reviving his career with a victory that leaves James DeGale facing retirement.

The 29-year-old dominated their grudge super-middleweight match-up at London’s O2 Arena, knocking DeGale down twice to secure the finest win of his career and put himself back into contention for a world title challenge.

He has been fighting at 168lbs since February 2017, yet continued to appear a natural middleweight. He had long suggested a return there would give him his greatest chance of success.

A lucrative offer to compete in the World Boxing Super Series and then his rivalry with DeGale ensured he remained there, but his father and manager Chris Eubank Sr, who excelled in both divisions before retiring after successive defeats at cruiserweight, is encouraging him to return.

Saturday’s victory was also Eubank Jr’s first under his new trainer Nate Vasquez, and came as he demonstrated significant signs of improvement, ultimately ensuring that they will continue to work together.

“This was a career-defining fight for me, this was make or break, do or die,” he said. “I had to win, I had to make a statement, and I believe that’s exactly what I did.

“I want to challenge for world titles, I want to fight big names, the best in the middleweight or super-middleweight division. I can make both weights; whatever’s put in front of me, whatever the best route is, I will take.

“It’s extremely satisfying. (DeGale) saying that I can’t mix it at world-level, I can’t beat the top guys, I needed to prove that wrong. He managed to get a lot of people to believe that. So now hopefully I’ve turned some of the doubters, haters, into believers.

“I didn’t think he had it in him to get up after two heavy knockdowns like that, to keep going, and take those big shots. Respect to him for that.”

DeGale confirmed post-fight that he is likely to retire, and when asked about Vasquez’s influence and a potential rematch with Billy Joe Saunders, Eubank Jnr said: “Nate brought focus to the preparation. He brought a tailored, focused training camp, which I’ve never really had before.

“I had the right sparring, was working on the right things, for James DeGale. For all my previous fights, all my biggest fights it was just get fit, spar whoever’s in the gym, and fight.

“For this we studied, had a strategy, and that’s what we’ll continue to do for my future fights.

(Me and Saunders have) got a lot of history. I look at that and the rivalry we have; it’s tough not to want that fight.”

The 52-year-old Eubank Snr added: “He fought at 12 stones. He’s a middleweight, and that’s what we’re going to discuss, and look forward to competing at again.

“It may be time to come back down, but it’s something we will discuss as a team. He’s a true middleweight.”