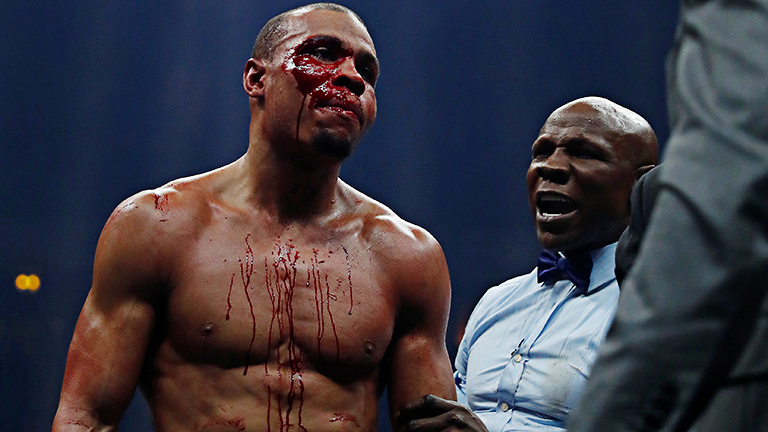 CHRIS EUBANK JR can this week be seen on the front cover of Boxing News for the thirteenth time in his career. That seems an awful lot for a fighter who is yet to win a world title doesn’t it?

Of course, we hold our hands up for that. No one forced us to give him such exposure. While it annoyed some of you along the way, a portion of the blame must also lie with you. Because if nobody was talking about him, we would not have put him on the cover in the first place, nor would we have kept doing so if sales figures had suggested it was bad for business. For a time, Eubank Jr was atop one of the biggest waves of interest in the whole of British boxing, sitting behind only Anthony Joshua as the most talked about British boxer on our digital channels.

And though his cocksure personality and fighting style continues to surf that wave of publicity, it was his father who created it. Not just by spawning him in the first place but with the incessant prophecies of fistic grandeur for ‘Christopher’ and unthinkable disaster for his opponents. For the irresistible soundbites and brain-scrambling predictions; the formidable head of Gennady Golovkin, don’t forget, was supposedly there for the taking not so long ago.

There is fatherly pride and then there’s blind faith. Yet it was so passionate, so unrelenting, it was easy to wonder if the Eubanks were on to something. Even now, after a comprehensive points loss to George Groves one year ago that followed a more competitive defeat to Billy Joe Saunders in 2014, there’s enough unanswered questions about the granite-tough fighter to retain exceptional interest in what happens next. Enough, in fact, to lead plenty to conclude that the 29-year-old will have too much for the supposedly fading James DeGale this weekend.

But Senior’s boasts – even by boxing’s standards – were out of the ordinary; father and son relationships anchored in this brutal game are rarely anything less. Yet, even now, I do not believe for one second that Eubank doubted anything he was predicting. Indeed, watching Junior in the gym over the years, and against the right opponent under the lights, it has certainly been easy to recognise the potential. His 2017 thrashing of Avni Yildirim, who fights for the WBC super-middleweight title this weekend in America, drew widespread applause. The victories over Spike O’Sullivan, Nick Blackwell and Arthur Abraham were also worthy of praise.

VICIOUS: Eubank Jr tears into Yildirim on his way to a brutal third round victory

While many scoffed at those who got behind Eubank Jr, they only did so with significant volume after his defeats. Before he was exposed, plenty of naysayers were wondering if he might turn out to be all that his father expected of him; even DeGale – who famously sparred Eubank Jr in 2012 – will admit to getting swept along with the hype prior to last year’s loss to Groves.

But something changed the night Eubank Jr, careless and ragged and unable to change tack, was beaten over 12 rounds by Groves. Afterwards, Senior admitted Junior was poor and did not deserve to win. Beforehand, Senior was telling referees to be mindful of his destructive son, to not allow Groves to take too much punishment. He told Boxing News that the spars with Groves and DeGale were designed to give his son the upper hand should they ever meet in the ring.

“When I engineered his sparring with James DeGale, for instance, I said to Junior, ‘I’m very surprised they’re allowing this to happen, but they don’t know what I know. Do not think you will get a second chance so make sure you beat him, and make sure he knows that you have beaten him. You will not get a second chance.’ And that’s exactly what happened,” Senior told me 12 months ago.

“It is a profound thing when you spar a man or fight a man. You are very close to them, you know about their strengths, if they wince, if they will be intimidated when you jab, if you feint and attack. You see this. You feel this. What these trainers are missing is this: They’re looking at the physical aspect, and at gameplays. No. I’m not looking at any of that. I’m looking at one thing, and one thing only. Spirit. And that’s what separates Junior from the rest of them.”

This time there was no mention of those spars. Instead, he calls his son’s contest with 33-year-old DeGale, ‘a 50-50 fight’ and even goes so far as to say he is ‘petrified’ of the outcome. Such observations are far more interesting, and perhaps in time revealing, than if Senior was telling us all – again and again and again – that his son was about to conquer the world.

We can form our own conclusions on why Senior is not showing the support of before. Some will say it’s simply more mind games, some reverse propaganda designed to lull DeGale into a false sense of security. Others, like those with a dim view of the Brightonian’s chances of beating DeGale, might suggest Eubank is tired of getting egg on his face. That his pride nor reputation, born from an exceptional career thick with guts and intelligence, can afford to take another battering. That after being made to look like he does not know what he’s talking about due to his son’s inability to follow instructions, Senior – without question a wise man – is now looking after number one.

But it’s nothing new for Senior to claim that his son is his own man.

“Two years ago I told him, ‘You take the lead now’,” Senior said last year. “‘Do not go by what I’m telling you, you have to become creative now,’ which is why we can’t control him. When you can’t control a fighter who is in the gym every day, in that he will not do what you tell him to do, that’s the type of fighter you want. Not the type of fighter who follows instruction. They’re good! Like Joseph Parker, he follows instruction and he does just that, and I think he’s good. But that doesn’t get great. That. Does. Not. Get. Great. That does not get Usain Bolt. That does not get Mike Tyson. Ray Leonard. Sugar Ray Robinson. Jack Johnson. That does not get Joe Louis. Muhammad Ali. No. Something that you can contain… isn’t magic. The magic is the things you can’t contain and that is what I wanted for Junior, which is why I said, ‘Take the lead’.”

But failing to contain Junior only meant his opponent could. Senior feared as such midway through the Groves fight when his son was swinging desperately, unable to get close. For one of the most complex characters in boxing history, it would have been a sobering realisation.

Behind the scenes, one suspects, Senior thinks long and hard about almost everything. It will certainly not have escaped him that Junior’s decision to bring in trainer Nate Vasquez for this fight, against his wishes, was one of the biggest insults he’s ever received. Because the unproven Vasquez’s place in Team Eubank was not only a boxer spurning a trainer but a son turning his back on the advice of his father.

It must have hurt. Yet Senior, who like Ronnie Davies has done so much more to support and nurture Eubank Jr than Vasquez ever could, likely knows that something had to change for his old prophecies to come true. It was the moment when Senior, somewhat begrudgingly, was forced to let his son truly go and fend for himself. Whatever he thinks of Vasquez, he knew it was a moment that had to come. His days of predicting the downfall of his son’s opponents are over. Now he must stand back and see what happens, and hope beyond hope that Junior can fulfil what he always believed he would.

Next week you can expect to see Chris Eubank Jr on the cover of Boxing News for the fourteenth time, but it will be the first time he has got there without significant help from his father. And whether its in victory or defeat, there will be no prouder man than the one who built him from the start.