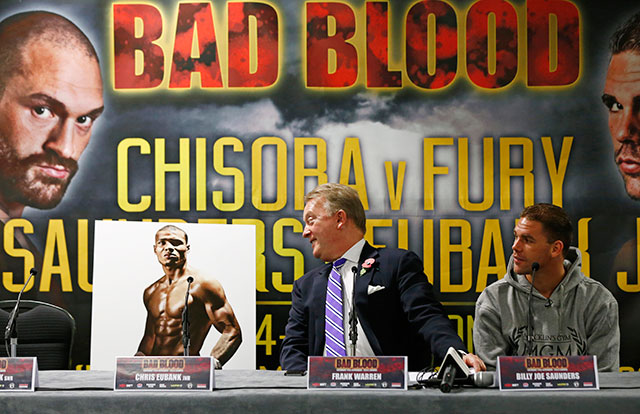 "It's detrimental to Brititsh boxing," Warren fumes as Billy Joe Saunders flies back from Marbella to be there, writes Matt Christie

CHRIS EUBANK JNR failed to show up for Monday’s press conference at the London ExCel, again leaving Billy Joe Saunders to promote their domestic November 29 grudge match by himself.

“Mr Eubank has decided he doesn’t want to show up. I can’t tell you how angry I am. I don’t think it’s the son, in fact I’m certain it’s not the son,” Warren said referring Chris Eubank Snr. “He’s the most awkward person to deal with.”

This is the third time Eubank Jnr has failed to show up. Warren insists this is a breach of contract and has contacted the British Board of Control. There are two remaining press conferences scheduled, in the week of the fight, and Warren promised Eubank would be present.

It is understood that the official reasoning for the no-show was due to Saunders’ recent comments on video that he wanted to slap Eubank. Warren responded by insisting security would be high, and even offered to install a barrier between the fighters. The withdrawal came after Eubank Jnr and his team had agreed – on Friday – to attend.

Saunders travelled back from his Marbella training camp with coach Jimmy Tibbs to attend, but was calmer than his promoter.

“Look, I’ll be honest,” he said. “Jimmy [Tibbs] had to come back anyway. It’s my rest day, and after this I get to spend a couple of hours with my sons so it’s no skin off my nose. I feel sorry for you guys [media] who are here for a story. I’ve never once slapped anyone. Why would I slap him now when I’ve got the whole fight to punch him? There’s no mind games, I’m in the shape of my life. I could fight tonight.”

Warren does not believe the middleweight showdown is in danger.

“I do think the fight will go on,” he said. “I just cannot believe it’s got to this. He’s [Eubank Snr] doing his son a great disservice. This is detrimental to British boxing. But Eubank just sees it as his moment of glory, a chance to get back into the limelight. But it’s not about him. It’s about Eubank Jnr and Bill.”