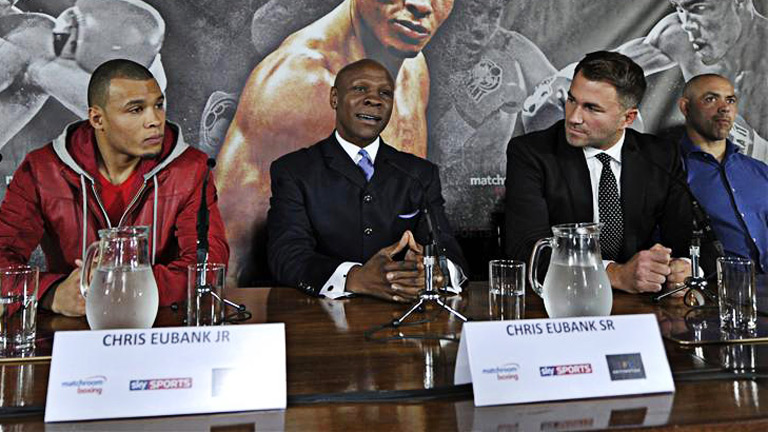 Having just signed with Matchroom Boxing, and with respected trainer Adam Booth now in his corner, Chris Eubank Jnr has his sights set on pay-per-view stardom.

The 26-year-old was previously with Frank Warren, but will now fight out of Eddie Hearn’s stable and will box on October 24 in Sheffield and December 12 in London.

The middleweight contender is looking forward to showcasing himself on Sky Sports, and is hunting down the 160lb titlists.

“The plan is most definitely to become a pay-per-view fighter. Sky Sports is one of the biggest platforms for boxing in the world,” he told Boxing News.

“Whoever’s holding the world middleweight title belts is who I want to fight within the next year. Gennady Golovkin is the number one guy in the middleweight division, some say in the world but I don’t think so.

“The end goal is to beat the best.”

Eubank Jnr also revealed his desire to move between middle and super-middleweight.

Booth, who has experience of dealing with pay-per-view events given his involvement with David Haye, will work alongside Eubank Jnr’s trainer Ronnie Davies.

“Chris is almost a pay-per-view fighter now, he’s got the name, the image and he’s got the style. If you put him in a good fight, you know he’ll put on an entertaining performance,” Booth told us.

“As a coach you want to work with good fighters who have the desire and the ability to be the best. He can go all the way, I wouldn’t be involved if I didn’t think that. I’m not interested in working with fighters that aren’t going to be world champions, who don’t have the belief. I’m fortunate enough that I can make those choices.”

“Being on Sky gives him the platform he deserves and wants, it will allow him to go on to pay-per-view.”

Booth also trains current WBO world middleweight champion Andy Lee, who is set to defend his strap against Eubank conqueror Billy Joe Saunders, but confirmed that a clash between Chris and Andy will not take place.