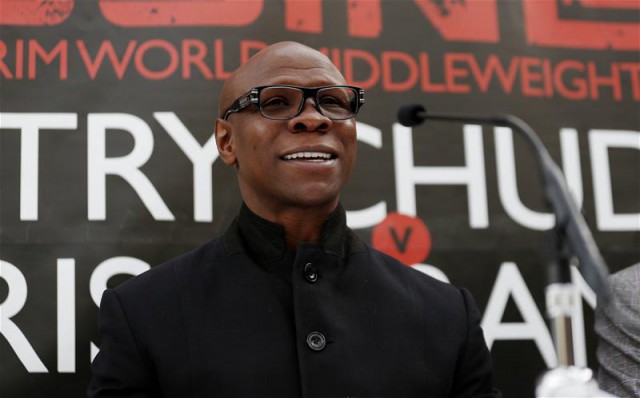 Take a surreal journey through the mind of Chris Eubank, writes John Dennen

“ILLUMINATE. Beacon. Big. Boxing.” Speaking to the assembled media throng, Chris Eubank shrugs off the shackles of complete sentences as he sums up his philosophy of the sport and the path his son, Chris Eubank Jnr has followed. “This is not hide and seek. We should speak proudly for what we do, how we think and how we see things,” Eubank Senior declared.
He harbours no regrets after moving Eubank Jnr straight into a clash with Billy Joe Saunders in November for his first title fight, which his son lost by split decision. “Pressure is what this game is about. It’s all about pressure,” Chris Snr contends. “Why do you think I’ve become notable? It isn’t just because I had the ability to fight. I had the ability to actually dare. This is all pressure. I want him to get used to that.”
Eubank Snr is relaxed about adding to that pressure and his faith in his son remains undimmed. “Do I think he can beat [leading middleweight, Gennady] Golovkin?” he asked. “If he uses his jab and he uses his radar…” He paused before answering his own question. “Absolutely,” he breathed. “And I’m going to keep on pushing him.”
Eubank Jnr will go straight into a WBA Interim title fight with Dmitry Chudinov at the O2 in London on February 28. “I think I’m going to be too much for him. I’m on the war path. No messing about,” Chris Jnr promised. “This guy is not Billy Joe Saunders. He’s not a slick southpaw you have to figure out. I know what he brings to the table. It’s one of those things where if he does come to fight, which Saunders was not prepared to do, he wasn’t prepared to stand toe-to-toe with me, he wanted to negotiate, pick points and get away, I don’t think this guy is going to be like that. Anyone who does try to stand toe-to-toe with me is not going to last. It’s going to be an exciting fight.”
There is still no love lost between Saunders and Eubank. “Anyone that steps in the ring deserves respect as a fighter. As a person, no, there’s no respect there,” Chris Jnr said. “I’d love the rematch, there’s nothing more I would love than to avenge my defeat, even though I don’t see it as a defeat. I feel like I outperformed him.
“I’ve got the loss on my record. I’ve got a lot of pride and I’d love to put that straight. Will he take the rematch? I don’t actually believe he will. I believe that was the hardest fight of his career and he walked out of the ring that night with a lot of question marks. For me, I walked out of the ring thinking, ‘I’m here.’”
Just like his father’s faith in him, Eubank Jnr’s confidence in himself is undiminished. “There have been many, many great fighters who’ve had losses early in their career or at the stage I’m in in my career, some of those losses have be devastating,” Chris Jnr said. “It’s a minor setback for me and the comeback is on February 28.”