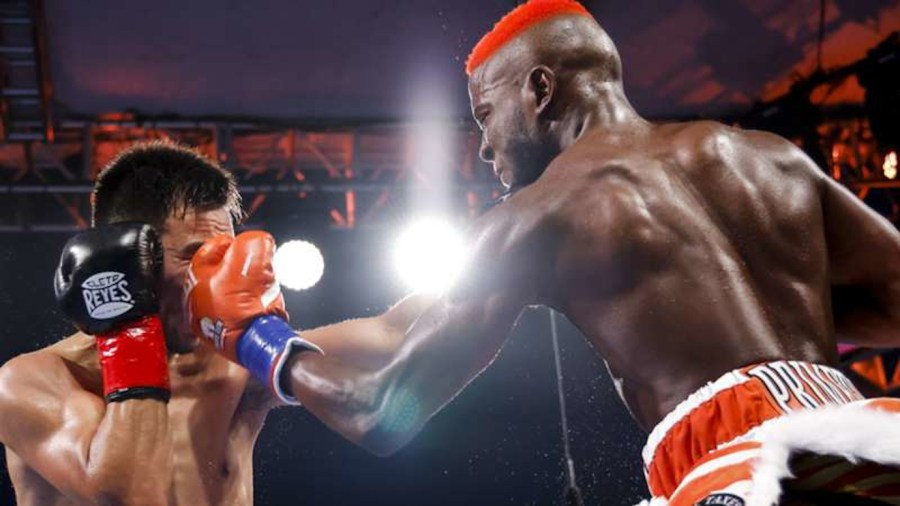 IF you had never heard of Chris Colbert before you would think he was the latest garishly-styled frontrunner in boxing à la, say, Adrien Broner, the posterboy for perpetual underachievement.

Colbert, after all, shows all the hallmark signs of the all-sizzle-and-no-steak prizefighter. He’s lippy, profane, wears gladiator trunks, employs the shoulder roll, sticks his tongue out at his opponents, and dyes his hair more frequently than Dennis Rodman did in his prime. (At this rate, he is going to run out of colours).

But on the last point, we might add that Colbert changes the colour of his locks in solidarity with a particular cause. Pink stands for breast cancer, purple for epilepsy, and, in his latest outing, he was seen sporting atop his head a coif of bright carrot orange – orange is in honour of those suffering from multiple sclerosis. (He says blue, which represents autism awareness, could be an option in the future).

No one, to be sure, is going to be in a rush to describe Chris Colbert, the rising Brooklyn-based super-featherweight, as humble or modest anytime soon. Yet it would be a mistake to assume, on the basis of his brash personality, that his boxing ability is something dubious.

It turns out the greenhorn can fight a bit, that there is more substance to his craft despite whatever his cocky public persona may suggest – just as his preference for dyeing his hair stems from a more profound place than would seem to be the case.

On Saturday night the 24-year-old Colbert controlled nearly every moment of his 12-round bout against a game, but undersized, Mongolian Tugstsogt Nyambayar en route to a clear unanimous decision at the Dignity Health Sports Park.

The scores were 117-111 (Zachary Young) and 118-110 twice (Carla Caiz, Fernando Villarreal) all for Colbert, who owns a minor version of the WBA 130-pound belt and may soon be in line to land a title shot.

Nyambayar, a career 126-pounder, took the fight on two weeks’ notice after the original opponent, Cuban gatekeeper Yuriorkis Gamboa, had to pull out due to an injury.

The Brooklynite controlled the fight in the early going with a quicksilver jab that landed with surprising regularity. Nyambayar had his moments, though, connecting on a few counter right hands here and there whenever Colbert lunged in. But the Mongolian was clearly a step behind all night and could never quite figure out his clever adversary.

By the seventh round, Colbert had found his groove. He was walking Nyamabar down and uncorking one combination after another. His ability to dart in and out of range had Nyamabar struggling to mount a proper offense. Nyamabar, to his credit, was never visibly hurt, although, to be sure, he had no answers either.

Colbert was in a complimentary mood afterward.

“For a 126 pounder, [Nyambayar] carried power,” he said postfight. “But the name of the game is boxing, using Muhammad Ali tactics. ‘Float like a butterfly, sting like a bee’.”

Rising 23-year-old Dominican prospect Michel Rivera recovered from a knockdown to land the most impressive punch of his career when he knocked out durable Spaniard Jon Fernández with a straight right hand in the eighth round. Fernández went down, face-forward, practically in slow motion, before turning over on his backside. He was counted out by referee Jack Reiss at 0-44 of the eighth.

Up until that point, it had been a competitive affair, with the veteran Fernández arguably winning. The Spaniard outworked the Dominican in the early going, courtesy of a busy jab and timely left hooks. Rivera responded with hard right hand leads in the fourth and fifth rounds, but went down from a counter right midway through the sixth round. It was the first knockdown Rivera suffered in his career.

Not to be outdone, super-featherweight prospect Daniel Garcia of Colorado remained undefeated with a violent stoppage over Gabe Sandoval of New Mexico.

About a minute into the second round, Garcia, 19, connected on a searing left hook that sent Sandoval tumbling to the canvas. Although he beat the eight count, Sandoval was on shaky legs, as Garcia swarmed him on the ropes with combinations, forcing the referee to halt the bout. The official time was 1-21.