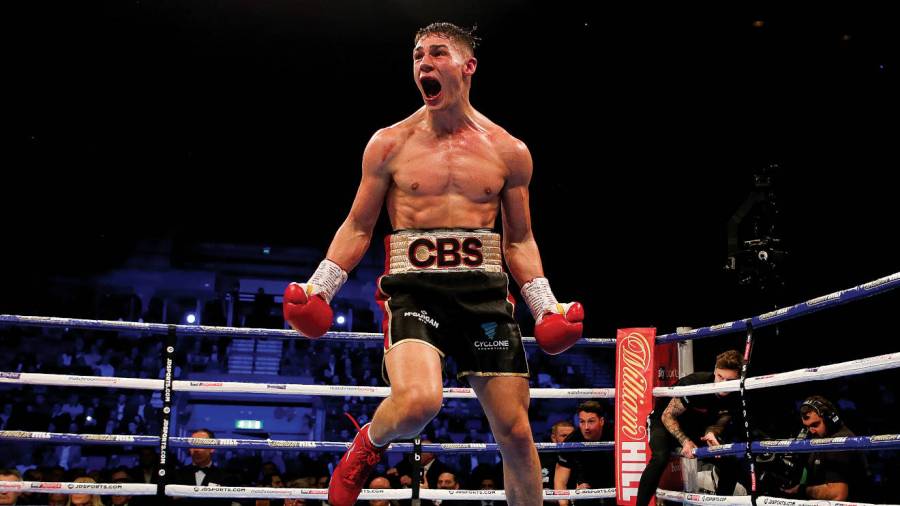 BOURNEMOUTH cruiserweight Chris Billam-Smith never has to search too hard for either inspiration or a blueprint, at least not when training alongside Lawrence Okolie, one of the best cruiserweights in the world, on a daily basis. The two leading British cruiserweights, both coached by Shane McGuigan, are at slightly different stages in their respective careers but are close enough, in terms of skill and experience, to act as perfect foils for one another.

“The sparring I’ve done with Lawrence over the last few years has been brilliant,” Billam-Smith, known as “The Gentleman”, told Boxing News. “It has really brought me on as a fighter.

“I’m very fortunate to not only be in the gym I’m in but also be surrounded by high-level fighters. I’ve trained alongside multiple world champions and now I’m training alongside a world [WBO] champion in my weight division. It’s hugely beneficial for me and is only going to help my career.”

Such is Billam-Smith’s growing reputation, he’s also wanted elsewhere. Last year, the current European champion spent weeks training alongside the world champion in his weight class: Latvia’s Mairis Briedis. This, as well as offering Billam-Smith some priceless experience, allowed him to imagine what might happen when Briedis and Okolie inevitably cross paths at some point. “Briedis is always exciting and Lawrence is always punching hard,” said Billam-Smith. “He’s dealt with a lot of different styles, Lawrence. People might try to put the pressure on him but he knows how to deal with that. He obviously dealt with [Krzysztof] Głowacki fine. He [Głowacki] may have been towards the end of his career but nobody had dealt with him that easily. Out of everyone who has beaten Głowacki, Lawrence definitely did the best job.

“It’s a great fight [Briedis vs Okolie], but Lawrence would be my favourite. He hasn’t looked in trouble at any point in his career. He looked ugly early on but he has never looked in trouble or like anyone is going to beat him. Briedis hasn’t been in too much trouble, either, but he does get hit and he does like to trade. Lawrence isn’t someone you want to be trading punches with because he hits so hard.”

As for Billam-Smith’s own progress, the trajectory remains an upward one. So far this year he has fought twice, outpointing Vasil Ducár over 10 rounds and then Tommy McCarthy over 12, and has successfully lassoed the British, Commonwealth and European cruiserweight titles within just 14 pro fights.

“I guess it [the European title] has come earlier than I thought it would in terms of fights,” said Billam-Smith. “I won the belt in my 14th fight and that’s quite early. But I know how the game works and how the business works. You can never plot your route in boxing because there are always different champions and they’re changing all the time. You just don’t know when you’re going to get your opportunity.

“We never thought I’d box [Richard] Riakporhe as early as I did [Billam-Smith’s 10th fight, back in 2019]. There were other opponents I’d offered to fight but they weren’t having it. I had no problem saying ‘yes’ to Riakporhe.

“Although I didn’t get the decision on the night [Billam-Smith lost via split-decision], I still think it was the best thing for my career. It put me on TV and people got to see what I’m all about.”

Next for Billam-Smith, 13-1 (10), is a first defence of his European crown on Saturday (November 13) against unheralded Frenchman Dylan Bregeon, whose biggest danger lies in the fact nobody knows much about him. The 27-year-old, defeated once in 13 pro fights, turned pro the same year as Billam-Smith (2017) but, unlike Billam-Smith, has yet to secure a single win of note.

“No one knew his name and I didn’t until it was said to me,” said the 31-year-old champion. “I looked him up and watched the (Fabio) Turchi fight, which is his only loss, and that was a close fight. If you’re losing by two rounds in Italy against a guy who’s headlining shows there, you might have won the fight.

“I’m well aware of the danger he possesses. He doesn’t look like a massive puncher but he definitely has heavier hands than his record suggests. He also looks like a tough bloke. His only loss was a close decision.

“I’m in a no-win situation really. Everyone is going to expect me to flatten him in however many rounds. But we know the danger he poses and I’ve got to be on it. If it’s not a good performance he could look half decent and nick a few rounds here and there.”

In many ways, Billam-Smith’s first defence against Bregeon feels like your typical homecoming fight, the only difference being it takes place in Sheffield rather than Bournemouth, the place Billam-Smith considers home. Deal with Bregeon, though, and there is every chance Billam-Smith takes his European title back to Bournemouth for a proper homecoming in 2022.

“I’ve had a good chat with Eddie [Hearn, promoter] and he’s said I’ll probably fight in Bournemouth in February or March next year,” he said. “That’s my dream, to bring a big fight to Bournemouth, and the long-term dream is to fight at the football stadium. Hopefully, if I keep working hard, and keep winning, I can make that happen.”