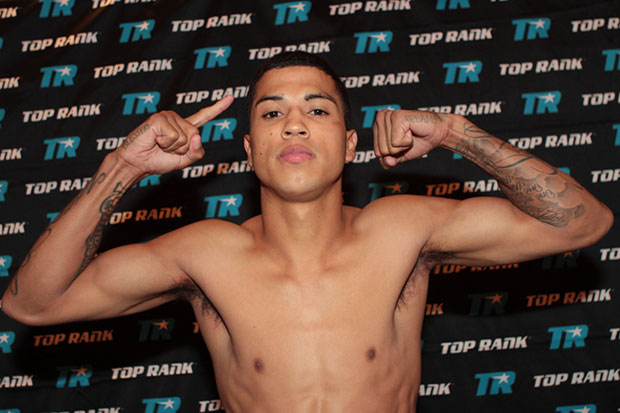 WHEN Carl Frampton and Kiko Martinez clash for the Spaniard’s portion of world honours next week there will be one interested spectator across the pond tuning in to see who prevails in the big Belfast blockbuster. California’s Chris Avalos, a 24-year-old with a 24-2 (18) record, sits as IBF super-bantamweight No.1 and will be patiently waiting in line for the winner.

“The IBF have said for whoever wins it’s mandatory that within 90 days we have to put a fight together so of course I’ll be watching this bout,” said Avalos who is reluctant to make a definitive call on who he believes will emerge victorious.

“I don’t really want to predict who is going to win or lose this fight because there’s a lot at stake. I heard that before the first fight Martinez was going through a lot of issues and problems with his personal life and things. I personally don’t want to call anybody out but it could go to a draw maybe.”

Chris insists that he should be the one taking aim at champion Kiko, either on September 6 or whenever manager Mike Criscio negotiated had the American’s title shot been secured. Avalos, however, has taken solace in the response of the IBF after the governing body stipulated that the winner is automatically required to defend against him within the next three months.

“Yes, me and Martinez were supposed to fight,” he continued. “This Frampton fight that’s going on was a secret fight. No one knew that it was happening and the only people that knew were in Belfast and some over here [in the United States] so the fight was secretly made. I was supposed to be fighting on a card against Martinez but Frampton paid to get the fight because they put up the money. Myself and Frampton were supposed to box in an elimination for Martinez but we didn’t because he pulled out.”

When asked if he would be willing to travel across the water to fight Frampton in Belfast -should the Northern Irishman prevail- Avalos’s response was emphatic. He cited that in his last contest he travelled to Macao, China to box Japan’s Yasutaka Ishimoto on the Donaire-Vetyeka undercard in a bout that served as an IBF eliminator. The corner of 32-year-old Ishimoto pulled their man out after a sustained beating and Avalos returned home with an eighth-round knockout victory on his record.

“I wouldn’t mind going to Belfast but I’ll go anywhere. I would be willing to travel to China to fight him and in fact I actually went to fight in China. I just asked where the next fight was and they said China and I didn’t care, wherever it’s going to be at is OK. It doesn’t matter where it happens, the only thing that’s going to change is that you are going to have a loss on your record because whoever wants to get in the ring with me I’m going to whoop their ass! Martinez or Frampton, it doesn’t matter if we fight two miles away or whatever. The only thing that matters is who they put in front of me and what it’s for. I don’t care if it’s in their backyard or their kitchen, we can fight.”

That was a rare moment of frustration slipping through as for the most part Chris Avalos was still as polite and considered as the undefeated prospect, then just 19, that I first spoke to back in 2009. Times have changed and regardless of the two losses he has since suffered the Lancaster resident appears to be a more mature product both in and out of the ring. “The Hitman” holds a strong belief that the lengthy wait for a world title will only be sweeter when his big chance finally arrives.

“For Frampton and Martinez I just say good luck for the fight and good luck because when you step into the ring with me I will win,” he affirmed.