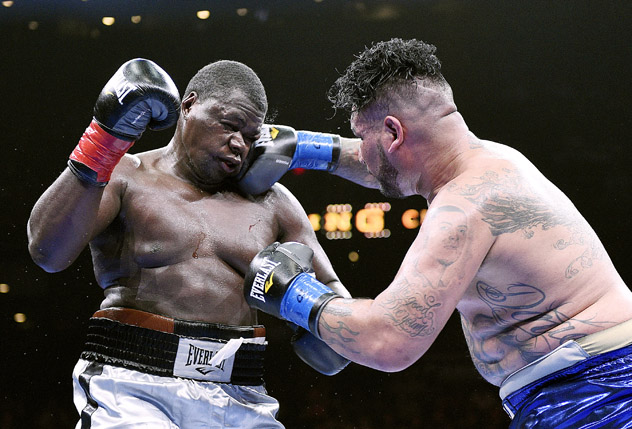 MEXICAN/American heavyweight fan-favourite Chris Arreola will box on the Carl Frampton-Alejandro Gonzalez Junior card in El Paso on July 18th. The 34-year-old will take on “Big” Fred Kassi, 18-3(10) and “The Nightmare,” as Arreola is known, knows he has a potential shot at WBC heavyweight king Deontay Wilder on the line.

Arreola, 36-4(31) wants that date with Wilder but he is not looking past the dangerous Kassi – as the man from Riverside explains here to Boxing News:

Q: First of all, Chris, how much do you know about Fred Kassi?

Chris Arreola: “What I do know is, he’s a boxer; he’ll try to box me. He’s a good mover, with good lateral movement. And he switches [stance] a lot. He can be on the ropes, and he’ll switch to lefty. I have to be very wary of that.”

Q: He was brutally KO’d by Amir Mansour in his last fight, but that fight was pretty even until Kassi got caught.

C.A: “Yeah, exactly. That fight was very even until he got caught. That’s why I said you have to be very careful against him, he can steal rounds off you. I know I can’t let him do that.”

Q: Are you sparring guys to match his stocky build and his switching style?

C.A: “I have a very good sparring partner, who is another one of Henry’s [Ramirez] fighters, he moves real good and he switches. He shows me everything. I actually think he’s slicker [than Kassi].”

Q: You have said you were disappointed with your last performance, when you out-pointed Curtis Harper in March. That was a great action fight though, the fight of the night!

C.A: “It was the fight of the night, hands down; probably the best fight of the first quarter of the year. But the problem is, I don’t want to be in those kind of fights. You don’t wanna be in wars like that. It’s great that you get fan appreciation but, really, that fight should not have lasted two or three-rounds at the most. But all credit to Curtis Harper, I can’t take anything away from him. He made the fight. I hit him flush on the chin with a right and he got up. I hit Eric Molina with a right to the side of the cheek and he didn’t get up.”

Q: You told me before the Harper fight that you wanted a KO. You want one on July 18 of course?

C.A: “Absolutely, man. Like I say, they don’t pay me for overtime. I get the same pay no matter how long the fight goes. So why not end it early? There is never any reason to keep someone in the ring longer than necessary if you have no reason. Personally, that’s why I think [Deontay] Wilder had such a long fight against Molina: he carried him into the later rounds. I don’t think Wilder showed his real stuff until the later rounds. And that can be dangerous, Molina could have got lucky.”

Q: You believe Wilder wanted rounds for whatever reason?

C.A: “I believe so. I think he wanted rounds, to polish up whatever he felt he needed to. I mean, he’s [Molina] a walking v*****! He hasn’t got any balls. I don’t think he has any balls at all. Harper has way more balls. I hit him [Harper] solid and he got up. I didn’t hit Molina that hard. But Wilder, he did impress me with the [Bermane] Stiverne fight. That was a great performance. But I don’t think Stiverne was in as good a shape as he was when he fought me. Look at his body, he may have weighed the same, but he didn’t look the same.”

Q: It’s no secret of course, how Wilder is set to box again in September and you are the favourite to get the fight. You would no doubt love that?

C.A: “Absolutely! I’ve wanted to fight Wilder for some time and now that he has a title I want to fight him even more. I think styles make fights, and my style is perfect for Wilder. I don’t think we’ve really seen him severely tested yet. Not even in the Stiverne fight because I don’t think he [Stiverne] was at his best.”

Q: If the worst came to the worst and Wilder fought someone else, what would you do – just keep busy?

C.A: “Absolutely, man. If I don’t get that fight, it’s okay. I’ll just make sure I earn my shot. I’ll kick that door in. I don’t mind having to do that one bit.”

Q: As you know, Tyson Fury will fight Wladimir Klitschko in October. Do you give Fury a shot? Some people say Klitschko didn’t look that great against Bryant Jennings last time out.

C.A: “The reason Jennings looked so good, well, not good, but better than he would have, is because the referee would not allow Klitschko to hold all the time. I’m sorry, but whenever he [Klitschko] fights over there [in Germany] I don’t want to watch, because it’s a boring fight. I just hope they’ve got a good referee [for the Fury fight], who won’t allow all the holding. Because I think that could be an awesome fight, a great fight. Fury’s a ballsy fighter and I’m sure he wants to get down and fight. I’d love to see that [kind of] fight.”

Q: Getting back to your fight against Kassi. How will you approach him?

CARL FRAMPTON IS THE MAIN EVENT JULY 18. READ AN EXCLUSIVE INTERVIEW WITH HIM HERE