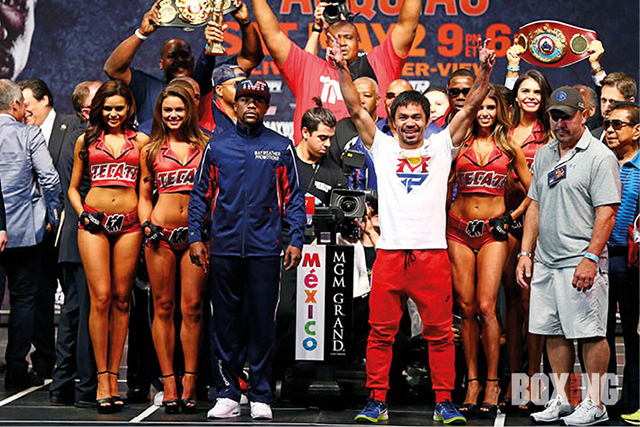 The last man to fight Manny before Mayweather thought Pacquiao was strangely animated before the big fight, writes John Dennen

‘SHOULDER-GATE’ became a significant talking point after Manny Pacquiao‘s loss to Floyd Mayweather, when the beaten man cited an injury to his shoulder in the fight’s aftermatch. Chris Algieri, the last man before Mayweather to box Pacquiao, couldn’t detect any problems hampering Manny during the fight, though he was surprised by the Filipino’s cheery demeanour beforehand. “I didn’t really see anything physically. I saw a little more mental. He seemed more focused from my fight, to tell you the truth. Even at the weigh-in, he was bubbly and smiley. He wasn’t that way with myself when we were in China. That’s neither here nor there. You don’t know whether that could be anything,” Algieri said.

After enduring a torrid night against “Pacman” in Macau last November, when he was floored six times, the New Yorker has another demanding assignment coming up next. He’ll box Amir Khan on May 29, though at least Algieri will have home advantage at the Barclays Center in Brooklyn. “You know, I’ve never been that guy, to take an easy route or an easy fight. I’ve come up very fast in both of the sports I’ve come up in. Even at a young age when I was kickboxing, I took on big fights. In my young boxing career, it’s been a constant step-up my entire career,” Chris said. “I have not been one of those guys who has moved along gingerly. I’ve been excited to tackle big opponents and big fights on big stages. This is par for the course for my career.

“We’re all competitors. We’re all out there to win. There’s a reason we do this at the elite level. You have to have a burning desire to be a winner.

“That’s one of the great things about this sport: when you keep winning, good things happen. Of course, we’re all very hungry to get this victory and move on with our careers. I’m in exactly the same place. This is a huge fight, a huge opportunity. As with any other fight, I want to win.”

To that end he has linked up with new trainer John David Jackson. “It’s been a great training camp. We’ve been learning quite a bit. John has been bringing out a lot of aspects of my style, things I can do in the ring that I haven’t had an opportunity to show just yet,” said Chris. “We’re both very excited about this fight, excited about what we’re going to be able to do on fight night the 29th. Learning new aspects in a sport I love has been an eye-opening experience and enjoyable one as well.

“I’m just a very hungry fighter at this point. I’m coming off my first loss as a professional, and watching Pacquiao and Mayweather fight has spurred me on this much more, made me that much more of a hungry fighter.”