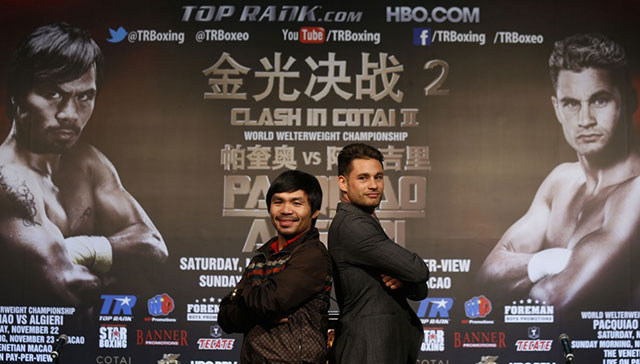 Algieri is loving life as Pacquiao's next challenger

CHRIS ALGIERI is enjoying life in the spotlight as the countdown begins for his November 22 showdown with Manny Pacquiao in Macao, China.

Algieri has enjoyed every minute of the ride leading up to his big fight. “I got mobbed in Shanghai,” he said during the rival’s 27,000-mile international media tour. “They had security to move us through. Similar things happened in Vegas. It’s exciting!”

Now it is time for the training camp and he knows what he has to do: “He (Pacquiao) knows how to fight,” said Algieri. “It’s going to be my job to break his focus and break his will, like I did with Ruslan (Provodnikov).”

The 5ft 10ins Algieri appreciates that he has a significant height advantage over the  5ft 6ins Pacquiao, but he realises that Pacman has fought a lot of taller opponents. However, he points out that none of them were like him. “I’m a different guy than the other tall guys that he’s fought. It’s an interesting style matchup.”

“I always use my reach and my jab. I was actually surprised at how much taller I am than Manny. I was told he was small, shorter than I am, but he’s a lot shorter than I expected. That plays a big factor in the speed. Speed is how much distance you travel. He’s got more distance to travel; it’s going to affect his speed.

“Manny is a master at changing range and positions and changing angles. He’s a combination puncher and he punches at every angle you can think of, but I’m a pretty good angle fighter as well. I’m not a straight in guy, so it’s going to be interesting to see how our styles mesh and clash. It’s going to be a very, very fast chess match out there.”

“My mental preparedness, my mental mind state going into the fight. By the end of training camp I’m going to be even more confident than I am now and as you know I’m already a confident person. I bring to the table many things that Manny hasn’t seen: Ever! He’s got a big athletic guy (in front of him) with a big desire to win. I’ve never lost. This is a huge opportunity and it’s perfect timing.”