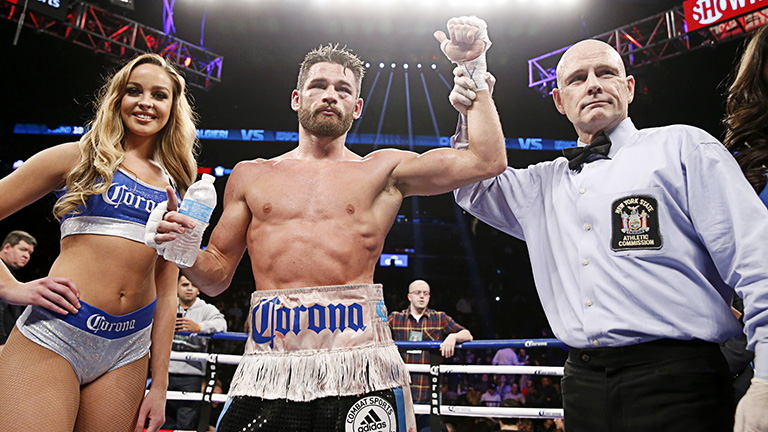 ON April 16 at The Barclays Center in Brooklyn, Chris Algieri takes on Errol Spence. Algieri can win, but Spence is expected to. A loss would not hurt Algieri’s career badly, but would be devastating for Spence. The Texan is being groomed as a future superstar something that would go by the wayside if he should come unglued against Algieri.

It is Spence’s coming out party. He has fought on national television before but against largely unrecognizable names. Algieri will be his first opponent that the mainstream boxing public is familiar with. For the first time in Spence’s career his performance will be compared to that of some of Algieri’s other opponents notably Ruslan Provodnikov, Manny Pacquiao, and Amir Khan. None were able to stop the Long Islander. If Spence does he can put on a cap and gown for he would have graduated to the world class level where no opponent would be considered off limits.

Algieri hates the term as it’s referenced to him, but there can be no denying that he is regarded as a gatekeeper at this point in his career. In boxing that is defined as an opponent who is the standard by which elite fighters are measured. Algieri is the line in the sand that Spence must pass through. Chris is trying to prove he is still relevant.

Spence’s talent is greater, but other factors often determine a fights outcome. Algieri’s confidence is high. His self-belief has never wavered. Few gave him a chance of defeating Khan, yet he nearly pulled it off. Algieri has never complained about the decision but says he believes he won the fight. Certainly Khan was impressed, saying afterward that had Algieri fought as well against Pacquiao he would have won.

In the Khan fight Algieri tried to will himself to victory by putting on relentless pressure. That strategy was one Khan hadn’t expected. Against Provodnikov and Pacquiao, Algieri was not nearly as aggressive. A lesser fighter than Khan might have folded. If the same Algieri shows up how will Spence respond? And that is the essence of this match up. This is looked at as less of a fight and more of a test of how well Spence performs, something the Long Islander is none too happy about.

This past March 9 at Gallagher’s Steak House in New York City, I sat at a round table with Algieri following the press conference to announce the match with Spence. Round tables are traditionally fun for writers. There is not much competition in asking questions and the few of us at the table have the boxer all to ourselves in what normally is a relaxed setting. But on this afternoon my question about being perceived as a gatekeeper got a cold response from the normally unflappable Algieri. “What other people think of me makes no difference,” he responded coldly. “I’m looked at as the veteran here,” says the 32 year old, “but calling me a gatekeeper is completely unwarranted.

“This win against Errol Spence will propel me back against the big names. I’m looked at as the veteran here, but Errol Spence has not fought anyone of note. Technically the kid is sound, but he hasn’t fought guys who were in there to win. I know how it feels walking into the ring for a big fight. He hasn’t experienced that. The doubt will be there.”

The food comes, and Algieri starts eating his steak. He is asked about Khan’s upcoming fight with Canelo Alvarez. A victory by Khan will boost Algieri’s stock a bit, but he dismisses the thought. “Khan will make it interesting for a while with his speed, but it’s just a matter of time before Canelo catches up to him” he says. “Amir’s not stupid, he probably thinks he’ll win, but his team probably took the fight for dollars.” Some might say that is why Algieri’s people took the fight with Spence.

“It’s just another day at the office,” surmises Algieri. “I never pick who I want to be in the ring with.” Gatekeepers never do.