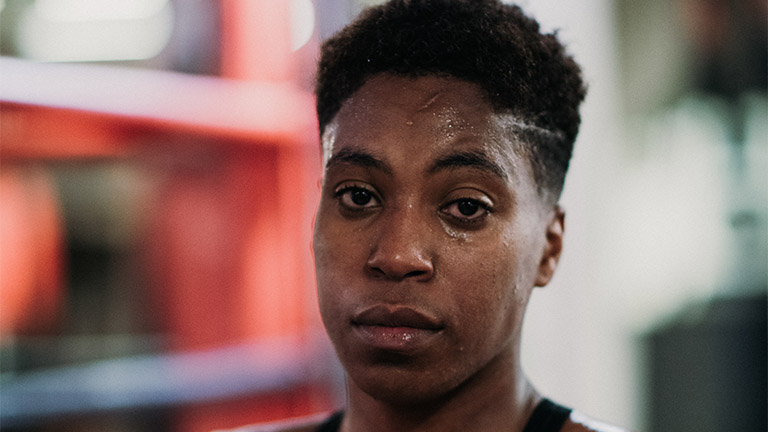 WE know how hard it is for boxers on the small hall circuit. It’s a long road to reach title fights and further still to draw in good paydays. But it is even harder for a female boxer.

“People may still not know who I am,” Cherrelle Brown, who speaks quietly and smiles broadly, tells Boxing News. “But the person who doesn’t have what you have, they want it the most. The person who’s gone through the harder route, they want it the most. So if you’re going to place a bet, put your money on me. Because I’m not just fighting for me, I’m fighting for a whole lot more. And that’s why I’m going to win.”

Brown has amassed a 6-0 record boxing at York Hall in Bethnal Green as a professional. Her most recent contest was a unanimous decision win over Kirstie Bavington to win a WBC International super-lightweight title. Those sort of belts might not command much respect in the wider boxing world, but for Brown it will prove vital. She needs it and she needs the ranking that comes with it to secure more meaningful fights.

“Winning that was amazing because it’s taken a long time to get to that point where opponents want to fight me. So honestly, I’ll take my hat off to Kirstie,” Cherrelle said. “She came to fight and you have to admire someone who’s willing to take that risk.”

She is a professional boxer but her bouts have been barely covering her costs. “When you’re with a smaller promoter, it’s a lot harder. Firstly to get your name out there and kind of find people to fight you. We’ve approached the European champion and they didn’t want to take that fight,” she explained. “I think a lot of people don’t realise if you are not on a certain platform, you practically have to buy your belts [because] you have to pay for the sanctioning fees, through ticket sales, the referees, the belt and the opponent, so it is really difficult. It takes a much longer time to get there.”

Other female boxers might be benefiting from appearances on high profile shows but Brown insists she feels no bitterness. “I’ve done everything I can, I have worked my socks off and I’m not getting the same opportunities. But that’s their journey. And I really have seen it in the amateurs where you work hard in a sport and eventually people will know who you are. Sometimes you just get one opportunity and that’s all you need. And I really believe that will come and if it doesn’t, it means it’s not meant to be and I get to live a life that I love,” Cherrelle said.

Brown was a very good amateur. She won everything she could, three times over. Three England Boxing Elite titles but as a light-welterweight, a division that is not in the Olympics. Therefore she could not join the GB squad. Remarkably, she achieved high level amateur accolades while struggling without a place to live and no employment. Her club was even letting her sleep in the gym. “I had no job, was signing on, I was battling with the job centre, please let me go and do my assessments [with GB]. Please let me go, this is what I want to do. I was lucky enough to have the right advisor, who was okay [and said] I’m going to let you go on the Friday. That didn’t happen. And I was like, ‘What am I going do?’” she remembered. “A lot of people don’t realise when I was boxing I barely could eat… I was living on the bare minimum but I just had a dream that if I kept going and kept going and kept going at some point it was going to happen. Like you hit points in depression where you just feel not so great. But I think having boxing literally saved my life, having something to focus on. It made it worth it.

“When I first started [boxing] I was the most angry 25 year old, you could ever know. I couldn’t hold my temper in the ring and I’d end up getting beaten up, a lot. I couldn’t deal with my emotions, I didn’t understand why me? Why me? Why did I have to go through life this way? Why didn’t I have a family that loved me? I went through that. [But] as time goes on it changes, you change as a person, you grow. So boxing becomes about being successful.

“The boxing made me feel like whatever I put my mind to and practise and try my best at, I can get to where I need to get to. I just have to be willing to sacrifice. I think because I had that, I had the boxing family around me, that kept me almost sane.”

Her outlook on life has changed along the way. She got a qualification as a fitness instructor and now works as personal trainer in two good gyms in tandem with her boxing career. Considering where she’s had to come from that is a substantial achievement. “Losing my best friend to breast cancer last year, it’s like a big reality check. We kind of walk around complacent and we’re not grateful for the little things and I think I need to start with being grateful with what I have and go from there,” she said.

She is grateful to her coach Sab Leo and the many others who have helped her. Cherrelle says, “I don’t know what the future holds. But if I just try my best and do as much as I can for the people I love, then I can live with that.”

But her final message: “Anyone who has a belt at world level, I want your belt. Please fight me, if you believe you’re a champion, then prove it.”