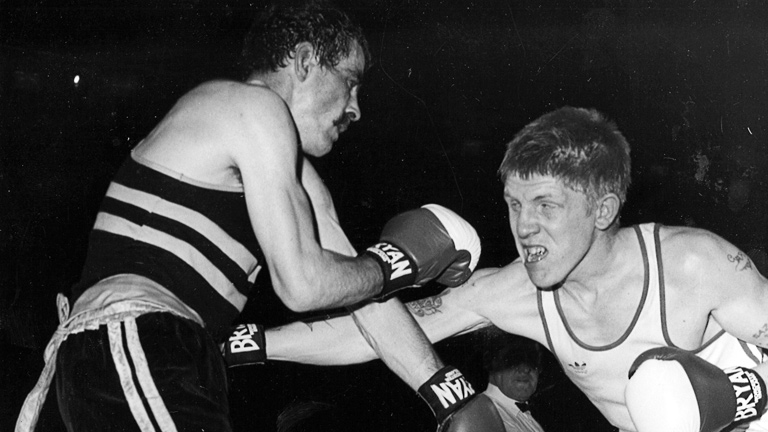 Tony Connolly on the days when he was sandwiched between two fighters he can never forget. This is his haunting tribute to one of them, recently deceased. It does not make pleasant reading

WAR heroes are no good in peace time, wrote Brian Keenan in An Evil Cradling, about his years held hostage with John McCarthy in Beirut.

They were lucky. They had each other. The big man Terry Waite had no one.

Gary Rogers reached an ABA final in 1983 when he pushed Kenny Willis, brother of Tony, all the way at Wembley. I screamed for him watching on the Beeb. He lived down the road from where I lived in Stafford. I had shared a dressing room with him. Even an opponent.

In four fights I had beaten Clinton Campbell through sheer agony. All points.

When Rogers met Clint, he stopped him after two rounds in the ABAs. He battered him. Campbell said he swamped him, wouldn’t let him work, stuck to him like glue.

I wish so much I had watched it because I was there. I was in the dressing room feeling sorry for myself as usual while I heard the grunts outside. It was 1982 ABA Championships, Staffordshires, Bloxwich Nightclub in the middle of the day. Ugly.

What was I doing there? The first round of a road that I never wanted to walk. The ABA championships.

Ginger-haired, wiry, bottom of the class type of guy, we all recall one at school, never to be messed with but no bully, Gary Rogers was clearly finished when his career ended. Now he is dead.

All Gary had was boxing. His family once ruled Stoke boxing in the West Midlands, at least the Potteries. They lit up the dressing toom because they loved the game. There was a magazine that came out briefly strictly for amateurs, I think put together by former BN contributor Ivan Berenyi, and I had it.

He borrowed it to peruse the ratings in some venue in Coventry which was like the living dead as far as I was concerned. Bob Mee was there covering it. What a worker. Errol Christie was there and he had made the world ratings in the magazine, Light-middle.

The next round of the ABAs came a fortnight later. I had a bye, unbelievable luck, while Rogers fought some guy who looked like Barry McGuigan and fought like him too. Two or three times Gary’s head was knocked clean over the top rope by ferocious single shots but he kept his own shots coming and took the decision deservedly, at featherweight.

It was a savage fight. And I had a bye the weight below, bantam. The weight below that flyweight Gary Rocky Roberts had almost killed some kid with West Ham colours on his shorts which now I realise were Aston Villa’s.

I will never forget Roberts’ excitement as the referee gave the instructions. He was a 30-year-old flyweight who could never get a bout apart from the ABAs, once every long year. He was jumping for joy, finally getting a fight, a sort of white Naz. The bell went and his uppercuts and hooks smashed in.

The Villa opponent was clearly talented but couldn’t survive a round. It was sickening.

I didn’t just feel like an imposter. I was an imposter. It was ridiculous. I went through to the Midland final by default while these guys were producing boxing from another planet (and two were losing – please let’s have draws in amateur boxing where possible).

One paragraph in the daily Staffordshire Sentinel, put in belatedly, said Gary Rogers had died at 47. At least they did put it in, and that one par said more to me than a thousand words on a footballer from Stoke City.

Yeah, I know, we have only each other in this world – no one else will help you but yourself. Those who are successful will mock this piece. Those not, may empathise.

What do we do about it? John Donnelly is Mr Stoke. He runs the whole the show with a lot of class and his family keep the game alive there just as the Rogers’ family once kept the actual fighting going with their steely wit.

Maybe John has an answer, but he is kept so busy with the current lot. But what a waste.

Gary Rogers is dead, and when I won the Midland final two weeks later, against a novice from Belgrave in Leicester I had once floored twice in sparring, I felt a fist against my belly as I left the ring in a state of relief and also terror that I was still in these damn championships of hell.

It was a tap of salute from Gary Rogers, who was climbing into the ring to somehow lose to Les Remekie from the same Leicester gym in the next bout. How proud am I of that.

And before I had climbed through the ropes that night I had just seen the aforementioned Rocky Roberts lose a fight against former Commonwealth Games competitor Joey Dawson which I can describe only as unbelievable.

Roberts came out of the ring with half his top lip missing. Three rounds of flyweight brutally, Dawson the winner on points. He usually stopped them with body shots which had once nearly sunk Duke McKenzie.

So I was Midland champion and they were not, the two Garys, Rogers and Roberts, the two war heroes born in the wrong time. It goes to prove one thing. When you love and want something so much, it often evades you.

FOOTNOTE: There is a new book out called Chasing the Scream about how they put a rat in a  cage all alone bar a water bottle and a morphine bottle and a little food. The rat sucked on the morphone bottle all day because it was so lonely and bored, had no purpose, just wanted to get out of it.

After a while they put the same rat in a cage with other rats of both sexes for company, constructive toys and also a water bottle and morphine bottle. It never once touched the morphine bottle because it had friends and purpose.

Without boxing, did Gary Rogers have a purpose?