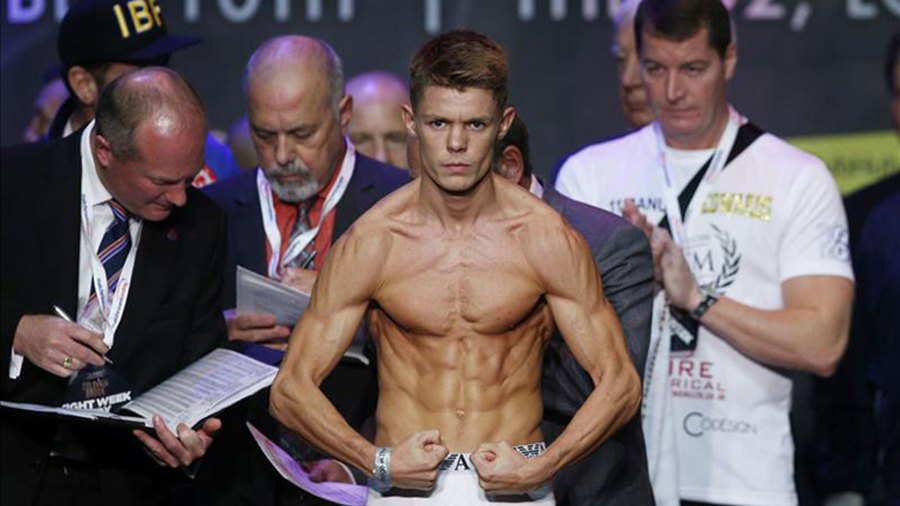 CHARLIE EDWARDS has had only eight fights in his professional career. In his ninth, on September 10 at the O2 Arena on the Gennady Golovkin-Kell Brook undercard, he’ll challenge John Riel Casimero for the IBF flyweight world championship.

Casimero, 22-3 (14), knocked out Amnat Ruenroeng in May to win the title. For Edwards, who picked up the English belt last year, it’s an astonishing rise to world level.

Charlie was an accomplished amateur, winning a European bronze medal and two ABA national championships. He won a place on the GB squad and came close to qualifying for the 2012 Olympics when he was only a teenager. He suffered further heartbreak when he claimed the England flyweight spot at the 2014 Commonwealth Games but lost to Scotland’s inspired Reece McFadden. But he is convinced, despite his limited professional experience, he will come into his own when he faces Casimero in September.

What did you think when you were offered the chance to fight John Riel Casimero?

Get me him now! I looked at what he’s done. Obviously he’s a great fighter but there’s something about his style that I know – I just know he’s made for me. I just knew it as soon as I saw him, just little clips, and this is when he knocked out that Amnat. I thought no, I want him. He’s well beatable, especially for a world title shot so early on in my career.

What do you think beating him would mean, given you’ve had so few professional fights?

It would be massive. He’s a two-weight world champion, a legit champion. He’s no paper champion, do you know what I mean? He’s just knocked out Amnat. In my opinion Amnat beat him in the fight before and I think he beat him quite widely on the scorecards. Amnat going into that last fight, I don’t think he would have been training as hard. Not only that he’s just qualified for the Olympics at 60 kilos, so that sums up to me there was some issue with weight there. That’s 10 kilos near enough difference. So there must have been some issues where he got knocked out and it was a bit of a phantom punch out of nowhere. So this opportunity, so early in my career, I jumped at it. I’m in a no-lose situation. If I go out there and I’m out of my depth, it’s just too early for me and I’ll hold my hands up. But I really fancy my chances. I’m really going to give it my everything. I can’t see anything else but me taking that title from him that night.

I’m going to be in unreal condition. And I’ve heard that in his camp the talks were it was going to be on September 24 on the [Anthony] Crolla card. They put a statement out, his camp, and he was just only getting back into light training [in July when the fight was confirmed]. So I don’t think he’s been in the gym. So he’s got to start from the start and he’s got to rush it now until September 10. He’s got to put it in and get his weight down and come from scratch, where I’m just going to turn it up a gear.

Golovkin-Brook was such a surprise, it’s been such massive news – how good is it being on that show?

It feels great. I’m the second fight announced on that show. The exposure’s been absolutely unreal for me, getting put out on Sky Sports, my Twitter’s been on fire, I’ve got so much support from the public, which I’m really over the moon about taking this fight. Yes, some people think it’s too early for me, but all they can do is respect it. They’ve been giving me a bit of agg about not doing the Andrew Selby fight but all that time I was releasing “I’ve got a big fight lined up” and
I knew it was something like this.

Have you had a chance to study him closely and look at his style since taking the fight?

We have sat down and watched him. He is slow-footed, which I was very shocked at. When I got told about him, a Filipino, I thought he’d be quick, rapid like Manny Pacquiao. But he is very slow-footed. He can punch with both hands but I think what is going to beat him is my awkwardness, my movement. And he’s very one-paced. He doesn’t really have a lot of gears. I don’t know, I look at him and I just think “I’ve got every attribute to beat you”. That’s why, going into this fight, whatever he’s got, I will do better.

And I know you’re a hard trainer, so whatever happens it’s not going to be through lack of trying.

The only way I’m going to get beat on that night is if he catches me and knocks me out. He’s not taking it off me any other way. I’m going to make it awkward and horrible in there for him. He’s going to have looked at me and think eight fights, it’s going to be an easy night here. It’s a hype job from England. But when he steps in that ring he’s going to know it’s real.

Have you ever been dropped or stopped, even in your whole amateur career?

We’re really taking this seriously and I think I can become world champion after my ninth fight, so quickly and out of nowhere. I’m just so buzzing with it.

One of your GB team-mates, Anthony Joshua, won a world title in 16 fights. Do you want to do it even quicker than him?

Exactly. It makes me laugh. It’s written in the stars. I remember when you put the picture of little and large in the Boxing News Annual [in 2010] and he’s gone on to win the IBF and now I’m following him, the same title. I feel so privileged to get the opportunity, thanks to Eddie and Barry [Hearn] and my management team for making it happen. They believe in me and they believe I’m going to take the title and I know, I know I’m going to.

Was there a temptation not to take the tune-up in July?

It’s to get my nose back in there, get a bit of confidence and get a load of hype behind me. I had to take it and be 100 percent focused and I wouldn’t underestimate any of my opponents ever in a million years.

I’d been out since February 27, so I’ve had quite a lot of time out because of injuries, because of my hand. But it’s fully recovered now. Sharpen the tools. He [Casimero] hasn’t fought since he won the title. He’s had a lot of time out. He might have some ringrust. I’m looking to push on and go full throttle.

What’s your trainer been saying about the fight?

As soon as we knew we could have the fight, I ran it past Danny [Vaughan]. Danny looked at me and said “You’re going to be the IBF champion that night”. He said “You will beat him, I’m telling you now. You’ve got every attribute to beat him. He’s quite solid with both hands but the way you box, if you box to orders, we will put in a performance and shock the world that night.”

This article was originally published in Boxing News magazine. Subscribe and don’t miss an issue!