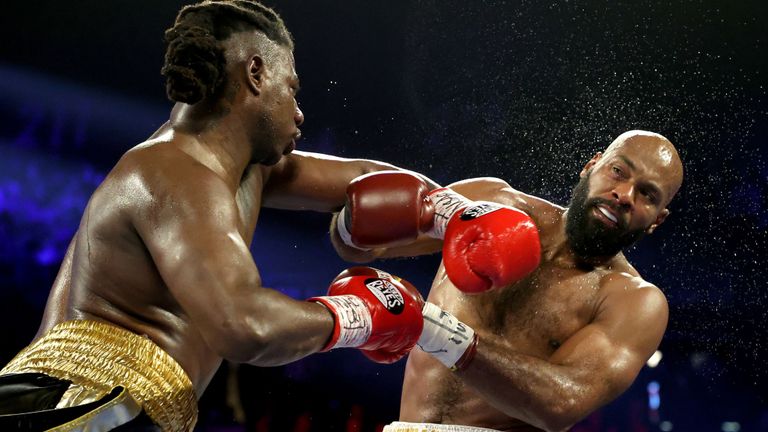 Charles Martin wins an eliminator but doesn't really deserve a title shot. All the news from the Fury-Wilder undercard

CHARLES MARTIN is chasing a rematch with Anthony Joshua. Sounds insane but he moved a step closer when he flattened Gerald Washington in six rounds of their IBF heavyweight eliminator.

Washington seemed to wobble Martin with a right hand as the first round came to an end. He tried to follow with another right, but it was telegraphed and Martin sweeped inside and stung him with a right and a left. After two minutes and 50 seconds of tedious action, there was something to get excited about.

The rest of the fight followed a similar pattern as Martin clumped Washington with his left hand occasionally, before really loading up on one in the sixth that ended the fight at 1-57.

This fight exhibited two things. One, neither fighter really had any business being involved in a ‘world title eliminator’ despite the IBF classifying this as such and, two, though the heavyweight division is in fine fettle at the very top the talent pool doesn’t run that deep.

Mexico’s excellent Emanuel Navarrete retained his WBO super-bantamweight title for the fifth time when he rendered plucky Filipino Jeo Santisima out of action at 2-20 of the 11th round. A wicked left hook to the body dropped his rival’s guard and the champion attacked the head. Under serious pressure and looking hurt, Santisima’s corner threw the towel as referee, Russell Mora, dived in.

The destruction was excellently done and had been in the making since the opening bell.

Navarrete probed early, looking for clues and openings. A left hook downstairs in the second found the target. The champion, one of the sport’s most underrated fighters, ramped up the pressure in the third, firing blows into his rival’s body and head. Santisima responded well in the fourth when a looping overhand right sent Navarrete into the ropes.

The Mexican seemed to go for the finish in the fifth as he raided Santisima with chopping punches, before wisely taking a breather in the next. Though quite as quick or destructive, watching Navarrete in full flow, as he pummels the resistance out of his rivals brings a young Manny Pacquiao to mind.

Standing at just under 6ft 6ins but weighing barely 154lbs, Sebastian Fendura is a sight to behold. One journalist said a few days before he took on Aussie Daniel Thomas, “Surely, before long, someone is going to catch him on the chin and knock him into next week.”

Thomas, though he tried, couldn’t even knock Fendura into the ropes. The spidery southpaw, of Coachella in California, invites punches because of his size. His long arms are not fast, they take a long time to get back to guard after he’s thrown a shot and thus leave gaping holes. Thomas regularly clipped his opponent with counters but Fendura – who makes a peak Tommy Hearns look blubbery – picked the better shots. The left uppercut in particular was an impressive and accurate blow.

After only previously venturing as far as the sixth, Fendura showed good stamina. In the 10th and final round he was on his toes and scoring with his jab. The scores in his favour were 97-93, 98-92, 99-91 and the referee was Robert Byrd.

Russian Petros Ananyan notched a minor upset when he rallied down the stretch to overtake Subriel Matias, taking a deserved unanimous 10-round decision. There were two scores of 95-94 and one of 96-93.

Matias started sharply, his fast hands crafted combinations that scored frequently. Yet his rival was unperturbed by the shots coming his way and, by the halfway mark, he looked like the stronger fighter.

A huge right, bowled over his shoulder, thudded into the Puerto Rican in round seven. The prospect, who came into this bout on a wave of 15 stoppage wins from 15 fights, drooped into the ropes and could do nothing to avoid a replica right hand moments later. Three more rights came, each one on target, before a left sent Matias reeling across the ring. With the ropes catching him, referee Byrd administered a standing eight count.

In a bizarre bout, Morecambe’s Isaac Lowe retained his unbeaten record when he scored a lopsided points win over the experienced Alberto Guevara at featherweight. The Mexican lost six points in total for pretty much every foul in the book and went down on the cards by the unusual scores of 96-87 (twice) and 95-88.

The robust Guevara, who was stopped by Shakur Stevenson in three rounds last year, was decked in the eighth round from a right hand but looked more likely to get disqualified by referee Vic Drakulich than knocked out. Lowe has now won four of his last five away from home. In a competitive super-lightweight crossroads bout – curiously only scheduled for eight rounds – Norwalk, California’s Javier Molina was too busy for the slick Amir Ahmed Imam of Charlotte, North Carolina. Molina found space beneath his rival’s longer arms to punish the body but the scores, 79-73 and two of 78-74, didn’t really tell the right story of a close bout. Jay Nady refereed.