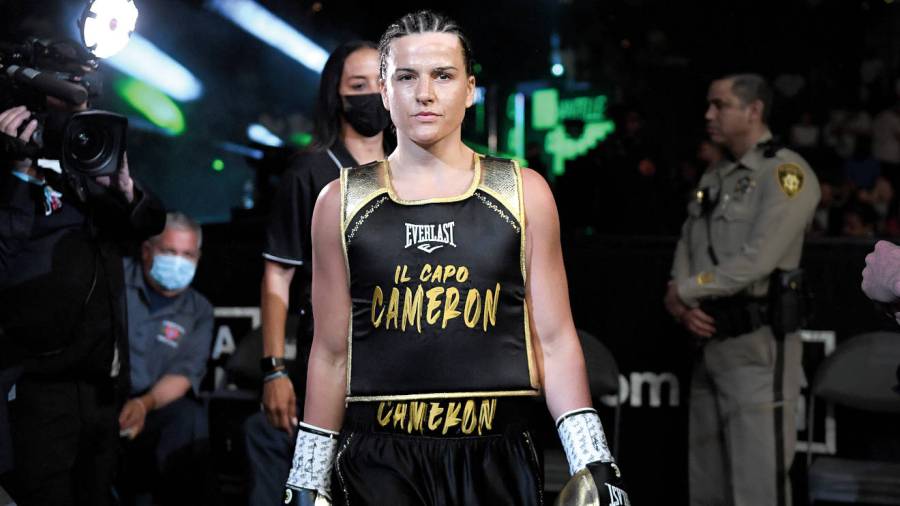 Chantelle Cameron is relishing her progress. She speaks to Elliot Worsel

THE disappointment felt by Otto Wallin last week, when learning of opponent Dillian Whyte’s injury and the cancellation of their October 30 fight, was days later countered by the excitement felt by Chantelle Cameron, who learned that as a consequence she would now be headlining at the O2 Arena.

The announcement marked a whirlwind 24 hours for Cameron, the WBC female super-lightweight belt-holder, during which she went from assuming her fight against Mary McGee would also be cancelled to coming to terms with her newfound prominence on the card.

“I really did think the show was going to be cancelled,” Cameron told Boxing News. “I thought if they couldn’t get a headliner there was no chance it would be going ahead. I was actually doing a media day when I found out the news [of Whyte’s injury] and my head was gone a bit. I just assumed I wouldn’t be fighting.

“Then I woke up the next day to the news that the show would still be going ahead and I would be headlining. I’m just so grateful that they’ve given me the opportunity and the show hasn’t been cancelled. I’ve put so much work into this fight, and I’m sure Mary has as well, and to think that could have all gone to waste if the show had been postponed would have been so disappointing for us both. I’m pleased we’ve been given the chance to fight. It says a lot for the progress of women’s boxing, I think. It’s brilliant.”

The McGee fight marks Cameron’s second of the year and the second defence of her super-lightweight title. Last time out, in May, she made her American debut when stopping Puerto Rican Melissa Hernández inside five rounds in Paradise, Nevada.

“It was an early stoppage and I think the referee jumped in quite prematurely,” Cameron recalled. “I thought I performed well, though. I stuck to the instructions and it was a great experience. Boxing in America was great. We had a fantastic week.”

Fighting in America, and feeling like the away fighter, represented a couple of ticked boxes for Cameron on her journey towards dominating her weight class. The next box, as headliner in front of a presumably decent-sized O2 Arena crowd, will be ticked this coming Saturday. It’s a challenge and occasion Cameron is relishing.

“I’ve just got to win. That’s it. It wouldn’t matter whether I was first on the show or last on the show, it’s just me against Mary in the ring when the bell rings. The job remains the same. As much as it’s great to be headlining, I’m not really looking at it too much. It’s still a fight I’ve got to win.”

Key to settling Cameron on the night and ensuring she fulfills her undoubted potential when the first bell sounds is Jamie Moore, the former European light-middleweight champion who now has the reins to Cameron’s career. Moore, who had never coached a female fighter before Cameron came along, has already made quite the impression on the 30-year-old, both inside and outside the ring.

“Jamie has been massive,” Cameron said. “He’s not just made me a better boxer, he’s given me confidence as well. He’s shaped me as a human being. He’s made me more confident, he’s made me better at speaking, and he has made me happy. I’m enjoying boxing again and that is paying off when you look at my performances. They’re just great people to be around [Moore and his team]. Their enthusiasm rubs off on you and they make you feel good about yourself.”

Momentum helps, too, in that respect and Cameron, at 14-0 (8), has a fair amount of it right now. She has developed a habit of picking up titles, some more meaningful than others, and stands to collect another one should she conquer McGee, the current IBF belt-holder in her weight class, this weekend.

“It’s 100% my toughest test,” Cameron conceded. “She’s a champion, she’s got a lot of experience, and she’s a really good opponent. It’s going to be a massive test but it’s the kind of test I’ve been looking for and asking for. I think she’ll bring the best out of me. I’ve got the tactics, and know what I’m preparing for, but I think it’s a fight made for me really. I think this will be the fight where I show people how good I really am.

“We’re both going to trade and will both be looking for a stoppage. Because of that, I think it’s going to be a bit of a war. She’s strong, she’s tough, and she can take a shot. I expect her to be quite aggressive and try taking the fight to me. But I think she’s underestimating my power and I think, on the night, I will be better than her in every department. Whether she stands and wants a fight, or whether she goes on the back foot, I think I’ve got an answer for whatever she tries to do.”