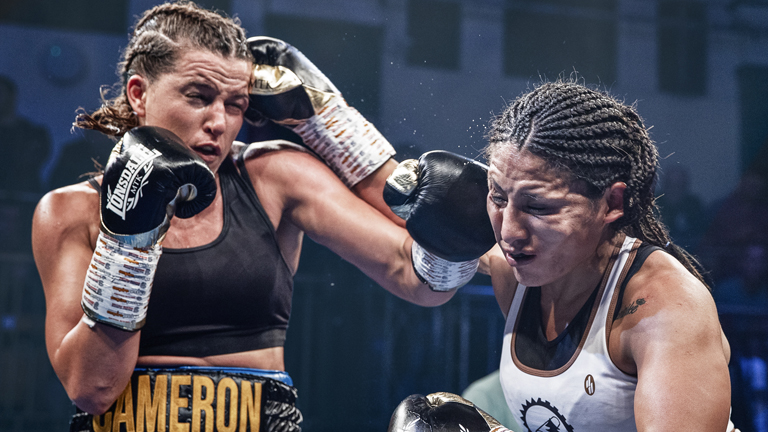 Sanchez, a former two-weight world titlist, came to fight, and her aggressive start had Cameron holding in the opener. But in the second Cameron started putting shots together, and by the end of the third her extra power was telling. Sanchez rallied, hit back when she could, and tried to take the initiative in the eighth, but Cameron moved and countered, then regained control to have Sanchez under pressure. In the ninth, Cameron was beating her rival to the punch, and a right dropped Sanchez by the ropes.

The visitor came out aggressively for the last, and there were some good exchanges, but Sanchez finished with a swelling below the right eye. Cameron now looks to challenge McCaskill – and if she wins, a showdown with Ireland’s WBO champion Katie Taylor would be a natural.

In the official top-liner on this MTK show, middleweight Danny Dignum (Essex) stopped Coalisland’s Conrad Cummings in the fifth of a scheduled 10-rounder. It was a sudden, dramatic finish – Dignum crashed in a left hook to the head, and referee Howard Foster promptly called a halt after 31 seconds. “Excellent stoppage,” one of the other referees commented. “One more punch and [Cummings] would have been knocked out.”

It was rather messy and bad-tempered while it lasted, with Cummings being wrestled down in the first and losing a point in the second for using the elbow. The Northern Irishman picked up a further severe warning in the fourth, and both were spoken to in the third. The cleaner work came from Dignum, who was catching his man as he came in, and by the end of the second there was a smear from Cummings’ nose. Cummings was cut in the corner of the right eye in the fourth, and caught by a left hook on the bell.

Fight of the night was the 10-round war between Chessington’s Daniel Egbunike and Egham’s Billy Allington, which saw the former take referee Cook’s 97-93 verdict and the vacant Southern Area super-lightweight title. As so often, the wide margin didn’t reflect the loser’s contribution. Allington pressed forward constantly but Egbunike stayed cool, picked his punches and countered accurately as Allington came in. Allington had his moments, twice trapping Egbunike on the ropes in the second, but generally Egbunike’s better boxing prevailed. Allington finished with a bump under the left eye.

Out for almost two years up until May, Cromer’s ex-IBF super-feather title challenger Liam Walsh continued his successful lightweight campaign, taking a unanimous 10-round decision over Rossington’s Maxi Hughes. Scores were 98-92 (Jose Martinez), 97-93 (Mr Foster) and a rather close 96-94 (Valerio Mosca). Walsh stalked his man throughout, coming forward behind a stiff jab, while southpaw Hughes moved and tried to counter, but Walsh was finding the target, while Hughes generally fell short. Hughes finished with a swollen right eye. Marcus McDonnell officiated.

In a welterweight 10-rounder overseen by Mr McCann, popular Belfast-based southpaw Michael McKinson unanimously outpointed Argentine Luis Veron by 97-91 (Mr Foster), 99-89 (Mr McDonnell) and 98-90 (Mr Cook). Veron touched down in the first and fifth sessions. McKinson consistently beat his rival to the punch, though Veron showed plenty of effort and there were some decent exchanges, especially in the seventh. Veron marched forward but was caught by counters. Both suffered some damage under the eyes.

Lewisham’s well-supported Dan Azeez made it 10 straight wins when he halted Latvian Edgars Sniedze in the fifth of a slated six. A right to the chin decked Sniedze by the ropes, and referee Cook waved it off immediately at 1-21. Sniedze tried to jab and move, but Azeez was too strong. A right counter had Sniedze down on one knee in the third, and in the fourth Sniedze was holding when Azeez got close. By the end Sniedze was bleeding from the nose.

Having lost his unbeaten record last time out in June to Paddy Gallagher, Rainham’s Liam Wells came back with a points win over Eltham’s Ohio Kain Iremiren, referee Cook scoring 59-55. Iremiren tried, and Wells finished with a swelling below the left eye and a nick under the right. Iremiren came forward but Wells countered effectively and held his own in some close-quarter exchanges.

Hackney’s Frank Arnold dropped Spain-based Nicaraguan Jose Aguilar in the second, from a left counter, and took Mr McCann’s 60-53 verdict. Aguilar had a bump under the right eye, while Arnold picked up a scalp wound in the fifth. Meanwhile, Sutton’s Aaron Prospere won his pro debut, dominating Bath’s Stuart Greener and taking referee Coakley’s 40-34 tab. Greener was floored by a left uppercut to the chin in the first, and in the second Mr Coakley counted again, ruling that only the ropes were keeping Greener up. Greener tried to rally but Prospere was always in control, and Greener finished with bumps under both eyes.

THE VERDICT: Cameron passes a potentially tough test with ease.