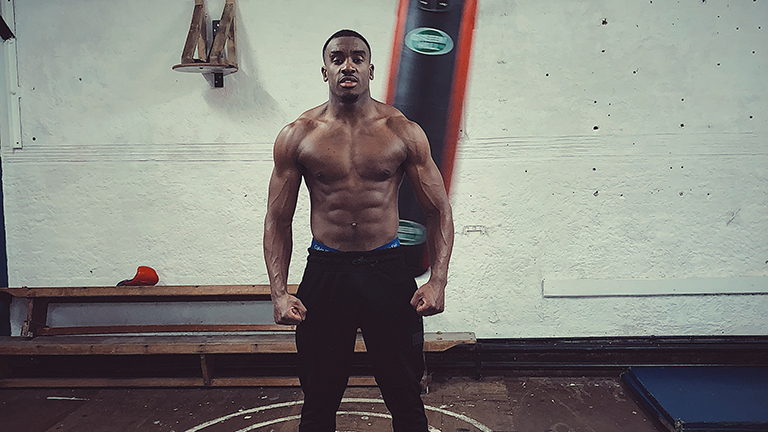 Star musician Bugzy Malone has a special connection to the amateur boxing club, and will support it so it can help more people like him. He speaks to John Dennen

THERE is more to being a champion than solely title belts or tournament victories. It’s a means, a method, learning how to be successful. It’s how boxing clubs help people even in their lives even outside the sport.

Bugzy Malone, the acclaimed grime artist who has become a vastly successful musician, sees coming to the venerable Collyhurst and Moston boxing club in Manchester as one of the turning points in his life. He is now helping to revamp the gym so it can support other young people in the way it helped him. “I’m just trying to make the place, not that it’s unclean at the moment, trying to clean the place up so kids can go in there and parents can take their kids in there and take the place seriously. So people can have the same kind of experience I went through and the gym can be used for other people in the same way that it helped me out, just as a place to go to learn discipline,” Bugzy told Boxing News. “Boxing just gives you a place where there’s people that you can respect and listen to. Because you’ve got to listen to a tough guy that can fight.”

He came to the club as a young man after a stint in prison. He had fallen into criminality and gang culture. The boxing gym and trainer Brian Hughes showed him a different way of life.

“They took you and nurtured you and trained you from the ground upwards,” Bugzy recalled.

“That was Brian that done that. Brian just told me you’ve got the potential to be a champion. In the end he was right because I’ve succeeded in my music career.”

Before he came to Collyhurst and Moston, his life was “just chaos”. “I was just having problems at home, where it was getting quite violent, and at school that was also getting quite violent. In the end there was just no other way out and the only people that I kind of related to were people that were gang members,” he said. “It’s young friends having fun then it gets pretty serious. Some people got badly hurt and you realise it’s serious. The criminal world is a serious place. Boxing for me was an excuse to not be there. Without the boxing I had not real reason not to be at every event, every negative event.”

Crucially the sport and the gym gave him the structure to be successful. He ended up pursuing those principles, of determination and dedication, in music. It gave him “the discipline to keep going”. There was something more too. “It was hope,” he said. “I think that’s what was missing. You grow up in the type of environment that I grew up in, you start to feel as if there’s no hope. I had family by way of uncles, they were successful criminals. That gave me a bit of hope. I thought I could be somebody if they’re somebody. But then as I was growing up, I thought I don’t want to be a career criminal, that’s not what I want to do. To get into a boxing gym and be told you can be a champion, and for there to be world champions that actually boxed there that are pulling up in big fancy cars, they’re on television, doing well for themselves. It was hope. And that’s sometimes all you need.”

Check out Bugzy’s single ‘Memory Lane’ ft. Tom Grennan, from his top-four EP ‘King of the North’. Find out more at thebugzymaloneshow.co.uk.