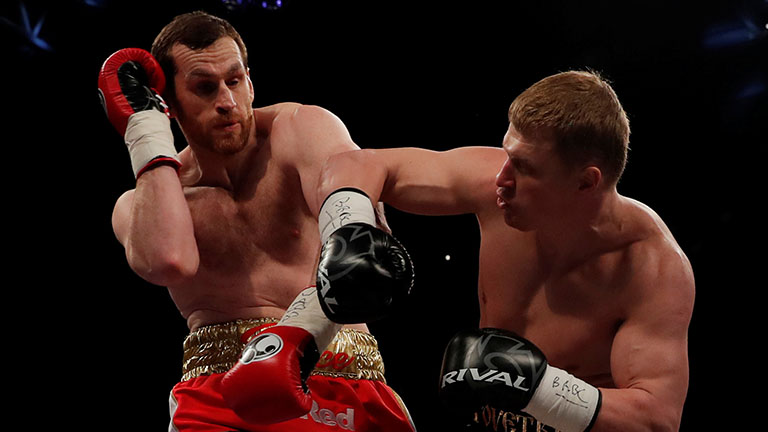 One of them, the one Boswell possessed, was thrown only sporadically and generated shooting pains whenever used, while the other, the one belonging to Povetkin, helped bring about an end to the fight in round eight.

More importantly, Povetkin’s right hand, according to Boswell, is good enough, sneaky enough and powerful enough to cause Anthony Joshua a world of trouble this Saturday (September 22) at Wembley Stadium.

“Povetkin has a sneaky overhand right that he catches a lot of taller guys with,” Boswell told Boxing News. “I don’t think Joshua has the best chin. He doesn’t have a terrible chin, but you can see he’s vulnerable sometimes when he gets hit.

“If Povetkin can land that overhand right hook, this crazy shot he throws really well, Joshua needs to be careful. He needs to look out for that shot.

“I think Joshua is one of the best heavyweights out there right now but Povetkin is going to be a tough fight for him. He throws tricky shots.

“I don’t want it to sound like sour grapes but before I fought Povetkin I tore my rotator cuff and had to have surgery. I fought him two months after the surgery. I wasn’t in the best shape. I couldn’t really throw my right hand.”

Dropped and stopped in round eight, Boswell puts the defeat, his second and last as a pro, down to exhaustion more than anything else. He wasn’t hurt, he says, at least not until the end, and rates Povetkin’s power highly but not as highly as other men with whom he shared a ring during a 17-year pro career.

“He has decent power,” said Boswell, 35-2 (26). “I only had one-arm and was pretty much winded and tired. He didn’t knock me out because he hurt me. He stopped me because I was tired.

“Does he have devastating power? No. He has solid power, he throws good punches, good combinations, and has effective short punches when he’s in close.

“He has a great chance of beating Joshua. People are sleeping on him. He’s very dangerous.”

As well as respectable power and a sneaky right hand, it’s Povetkin’s toughness, Boswell believes, that will give him a shot at the upset this weekend in London. Toughness, after all, helped the Russian hear the final bell against Wladimir Klitschko in 2013.

“He’s as tough as a box of nails,” recalled Boswell. “You’re not going to break his will. You’re going to have to properly beat him to win the fight. He showed that when he fought Klitschko. Klitschko was a much better fighter when Povetkin fought him than he was when Joshua fought him. He hit him with everything and Povetkin didn’t quit.”

Winning and not quitting are two very different things, of course. It’s true, few expect Alexander Povetkin to quit on Saturday night inside a football stadium. But even fewer expect him to win.